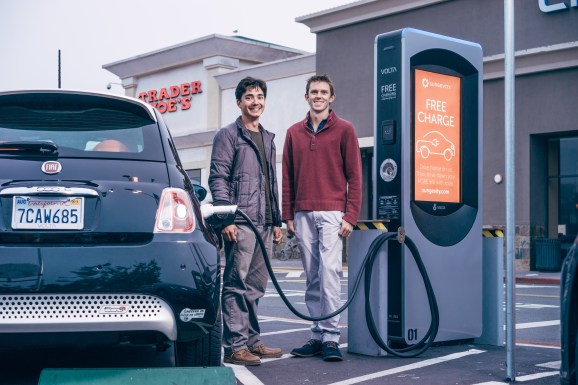 Volta, a startup that has over 100 free electric car charging stations in five cities, announced today that it raised $4.5 million in a series A round led by Three Bridges Ventures, and $3 million in financing from SQN Capital. In total, the Honolulu-founded company has raised $12.5 million.

Volta said that the funding will be used to open 400 new charging stations in other major cities.

The startup has set up the free charging stations in front of popular retailers like Macy’s and Whole Foods — at no cost to the hosts. Volta says its charging stations serve advertising companies, which are “seeing a fairly substantial brand lift and thus are maintaining relationships with Volta past their initial ad spend.”

Tesla’s Supercharger network offers free charging services, but only for Tesla drivers. ChargePoint also plays in the electric car charging sector; however, Volta claims to be unique because its service is free for both the landowner and the user.

“We face competitors selling emerging media advertising to sustainably minded brands. Where Volta really stands out is offering brands the opportunity to do more than a simply put their name on something that delivers a ‘green’ message,” the company told VentureBeat. “Volta advertisers are providing a real service to communities by powering drivers to a more sustainable future.”

Riverwood Capital, 500 Startups, and Epic Ventures also participated in the round.