With the critical and commercial success of Splatoon, Nintendo’s reputation as the gaming industry’s biggest nostalgia factory took a small hit. The House of Mario is known for releasing myriad sequels, franchise reboots, and taking other kinds of games and reskinning them with its enormous roster of characters. (Nintendo would of course not do this if fans didn’t buy the games, so they’re partially to blame). But even outside its core franchises, Nintendo has found success in developing new experiences without the need for a Mario makeover.

Nintendo’s hosting their E3 digital event Tuesday, and it’s their chance to unveil another original idea that’ll make some noise, like Splatoon did last year. But what other franchises has Nintendo come up with over the last decade? Here’s a primer.

Miis may be the bane of every “hardcore” Nintendo fan, since for them the limbless avatars represent Nintendo’s attempt to appeal to wider audience (which they may see as stepping a move away from what made the company great in the first place), but you can’t deny the little guys their success. Wii Sports was not only extremely popular as a pack-in, but in ’06, it was also extremely fun, and it’s still one of the best justifications for the Wii’s motion controller. They may be boring to think about these days, but in their time, Miis embodied an entirely new direction for the company.

All three of these were part of Nintendo’s “Touch! Generations” initiative, which branded games with a logo indicating their appeal to the wider audience that Nintendo sought. This gave these wider recognition that they otherwise may not have gotten, and fans dug them, even if some of them didn’t sell well. They didn’t present revelatory ideas, but they were new for Nintendo at the time. Better yet, the company had the confidence in each not to tie them to their standard franchises, and in each case, it’s the wrappers around the experiences that made them worthwhile.

Professor Layton, which was also part of the Touch! Generations initiative, went on the be one of Nintendo’s most successful modern franchises. Though Level 5 officially owns the copyright in Japan, Nintendo published it in North America and Europe, so depending on where you stand, Layton is either a first or a third-party game. Either way, the series was a huge success for both companies, having sold over 15 million copies. By now the series has lost a lot of its luster, but it still presents something different from what Nintendo usually offers, and the combination of story and puzzles continues to work quite well.

I think a lot of “hardcore gamers” will dismiss this series because it doesn’t have a mascot or gruff marine on the cover, but Nintendo’s probably not too miffed about it. It has sold well despite not looking at all like a Nintendo property, and it’s spawned a series of successful titles in its own right. Bucking conventional thinking about gaming and finding an audience outside the hardcore would be admirable coming from anyone. But as a Nintendo effort, Style Savvy shows how much it can think ahead when it doesn’t feel compelled to think inside its own box. 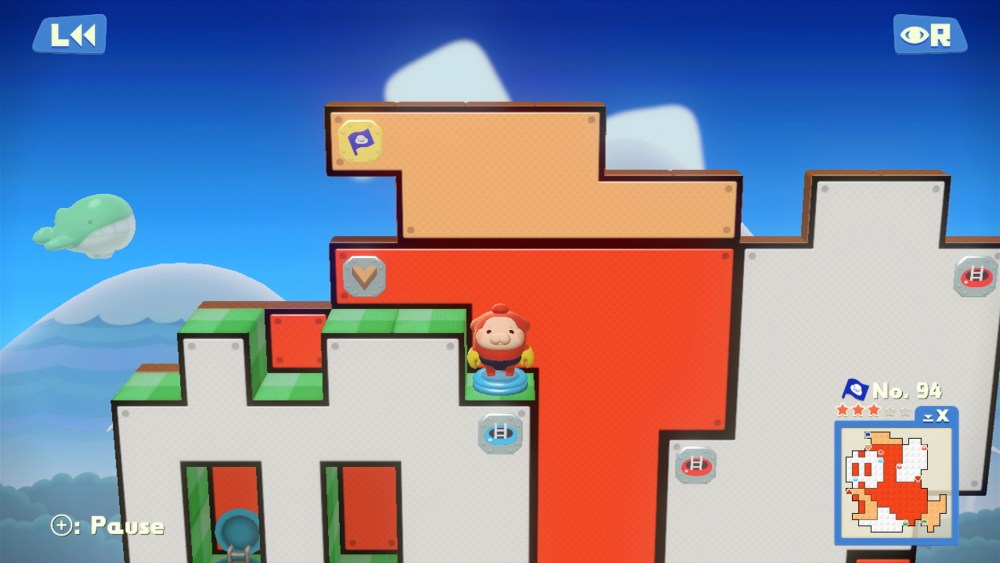 Above: The Pushmo series has had four games in five years, including an entry on Wii U.

Splatoon is fun and all, but in my mind Pushmo and its successors are Nintendo’s premiere new franchise. Perhaps not as impactful on a larger scale for a number of reasons, but Pushmo is undoubtedly one of the freshest ideas Nintendo’s come up with in a long time. Even better, each game completely changes how you approach puzzles, staving off the staleness that comes from sequalization. Though a lot of the fun comes from pulling and pushing blocks that look like characters from The Legend of Zelda, the feel is ultimately its own, and Mallo, Poppy, and the little sumo kids are simply adorable.

Though all three games in the Operation Rainfall trio (Xenoblade Chronicles, Pandora’s Tower, and The Last Story) were technically published by Nintendo in North America, they almost didn’t make it. Only Nintendo knows for sure whether it intended to release these in the U.S. before Operation Rainfall, the grassroots effort by fans to petition the company to publish these RPGs in the States, but it certainly doesn’t look like it from the outside. To be fair, Nintendo of America President Reggie Fils-Aime claims otherwise in the case of Xenoblade Chronicles.

Regardless of how these came to exist in the U.S., the games themselves show a new side of Nintendo in recent years. Each of these fairly big-budget action RPGs looks and in some cases feel like modern Final Fantasy and Tales games, and the push for these sorts of games on Nintendo systems feels reminiscent of their 16-bit era, when JRPG classics thrived on the system. That Nintendo would commission three of them was perhaps a bit risky, but it shows its commitment to exploring new ideas outside of its core franchises, even if the purpose was to harken back to another era.

As a previous caretaker of the Smash Bros. series, and current developers of various Kirby games, HAL laboratories is more than familiar with creating and releasing new games cashing in on Nintendo’s popular franchises. Thankfully, Box Boy breaks away from HAL’s past ideas and wrings a lot out of the titular Boy’s ability to replicate himself and fit into things. What’s more, Box Boy could be a sign of things to come from Nintendo — it’s the kind of a fast, small game that would be perfect on a phone.

This list doesn’t mean Nintendo is suddenly a bastion of new, innovative ideas in gaming. But while everyone bemoans the House of Mario for never fully moving away from its past, you’d be incorrect in saying that it never come up with new ideas. If it can fit an idea in with its big characters, it will. But Nintendo isn’t afraid to try something new.