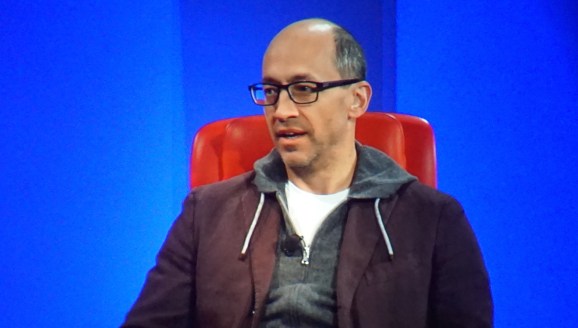 Dick Costolo, former CEO of Twitter, onstage at the Code Conference in May 2015.

Twitter’s chief executive, Dick Costolo, is stepping down but will remain on the company’s board of directors. Costolo and Twitter’s investor relations Twitter account confirmed the news in tweets today.

Jack Dorsey, a cofounder of Twitter, will be Costolo’s interim replacement. Dorsey will simultaneously continue to work as chief executive of payment company Square, according to a statement from Twitter.

The change is effective July 1.

Twitter stock was up nearly 8 percent in after-hours trading following Twitter’s announcement of the news.

Dick Costolo to step down as CEO, will remain on Board, and Jack Dorsey appointed Interim CEO, effective July 1

This is major news for Twitter, which has faced plenty of criticism about its ability to keep growing its user base and generating more revenue.

The company fell nearly $20 million short of analysts’ expectations in the first quarter of this year, posting $436 million in revenue for the quarter. Following that news, Twitter stock dropped by 19 percent.

On May 28, at the Code Conference, Costolo was asked if he would be stepping down this year. He deflected the question, stating that he had the full support of the Twitter board of directors. “I don’t feel like I’m sync with the board. I know I’m in sync with the board,” Costolo said.

“The board and I are completely in sync,” Costolo said.

At an event at Twitter headquarters in San Francisco today, Costolo received a standing ovation.

Twitter cofounder and former chief executive Evan Williams is part of the search committee to find a new chief executive for the company, which has 302 million monthly active users and 3,900 employees.

Twitter will hold a conference call at 2:15 p.m. Pacific today to discuss the changes. There is a hashtag for discussion on the topic: #TWTRannouncement.

Dylan Tweney contributed to this report.