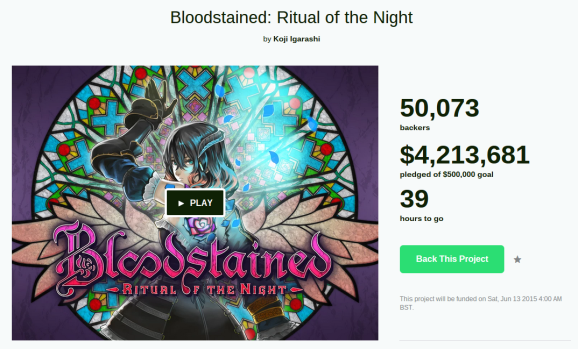 Bloodstained: Ritual of the Night is now Kickstarter most funded video game.

Bloodstained: Ritual of the Night — a Castlevania-inspired side-scrolling action-adventure — is now the most funded Kickstarter video game project ever.

Created by longtime Castlevania producer Koji Igarashi, Bloodstained has now raised over $4.2 million on the crowdfunding site with 38 hours still to go. That’s taken it above the previous record of $4.18M raised by role-playing game Torment: Tides of Numenera back in April 2013. Despite Kickstarter funding for video games dropping by half in 2014 compared to 2013 — from $58 million to $29 million — plenty of people are still willing to back projects they believe in. These are often projects with big names attached, though, like Bloodstained and the 3D platformer Yooka-Laylee.

Interestingly, Bloodstained has raised its Kickstarter millions without explicitly sharing any in-game screens or gameplay videos. One of the first sightings of the game actually running is in a developer update video from a few days back. It’s clearly a very early development build as Bloodstained isn’t due to release until 2017.

Two of Bloodstained’s stretch goals — both hit awhile back — were to port to Wii U and PlayStation Vita. Developer Armature has now announced that it’s happy to let another studio take on those ports.

“Since the community got these platforms off the ground, we figure that it’s best to let the community have them back when we’re done,” read its recent Kickstarter update. “As a result, after the release of Bloodstained we will share, for free, the Unreal Engine 4 Wii U and Vita code with any developer authorized to develop on those platforms!”