Dirty Bomb’s mercenaries are highly trained killers with weapons that can decimate entire armies. But they suck at negotiating their salaries.

The free-to-play multiplayer shooter (out now in open beta for PC) from developer Splash Damage emphasizes teamwork over kill-death ratios. Set in London in 2020, Dirty Bomb features a bunch of mercenaries, or “Mercs” — each with their own quirky personality — who work for private military corporations. Up to 16 players can fight each other on large maps while searching for loot and resources for their PMCs.

Publisher Nexon knows a lot about how the free-to-play business works. The Tokyo-based company found success with operating free online games in South Korea, China, and Japan. Dirty Bomb is the latest example of Nexon’s courtship of the Western audience.

The fast-paced battles and cool character abilities more than satisfy that competitive-shooter itch. But the slow grind to earning better gear and more mercenaries may turn you off. 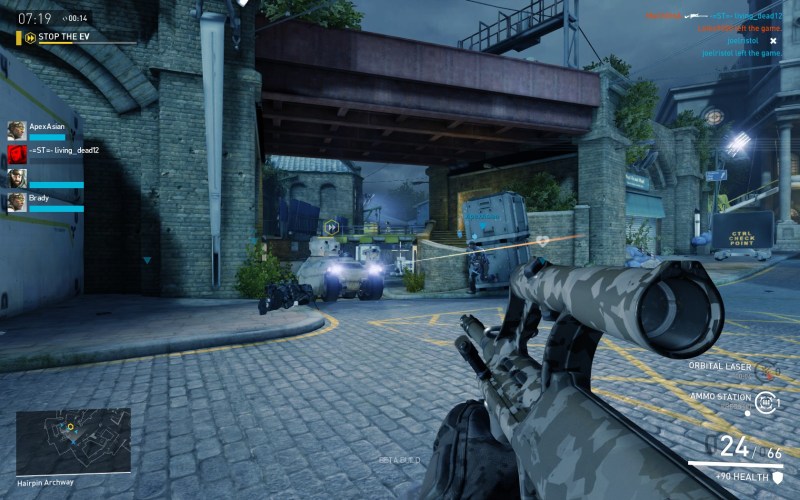 Above: In the Chapel map, you’re either defending or attacking the vehicle.

The focus on specific characters over nameless soldiers is one of a few elements Dirty Bomb borrows from multiplayer online battle arena games (MOBAs). Currently, it has 12 Mercs to choose from, and you’ll probably find a few that you enjoy more than others. They’re all variations on traditional multiplayer roles like high-powered offensive characters, damage-absorbing tanks, medics, and support classes.

In addition to the two mercenaries you receive when you first start playing (a medic and an assault guy), you have access to a rotating roster of three more characters, similar to how League of Legends rotates its free heroes. I spent a lot of time experimenting with different Mercs before I found a few that I liked.

I had the most success with Kira. Her gun is incredibly accurate, and I loved thinning the opposing team’s ranks when using her orbital strike ability to call down a deadly laser from the skies. You can bring up to three Mercs to a match and switch between them after you die. It’s a good idea to have characters with different abilities in your squad because you never know what your team will need. Proxy and Bushwacker can repair vehicles and disarm bombs faster than the others, and Kira and Skyhammer (he can call in airstrikes) can clear a large swath of enemies.

Loadout Cards improve your character by giving them new weapons, skins, and perks. Every so often, Dirty Bomb rewards you with equipment cases that has one of these cards for a random mercenary. They don’t significantly affect your experience, but they do help your Mercs stand out from other players’ squads. 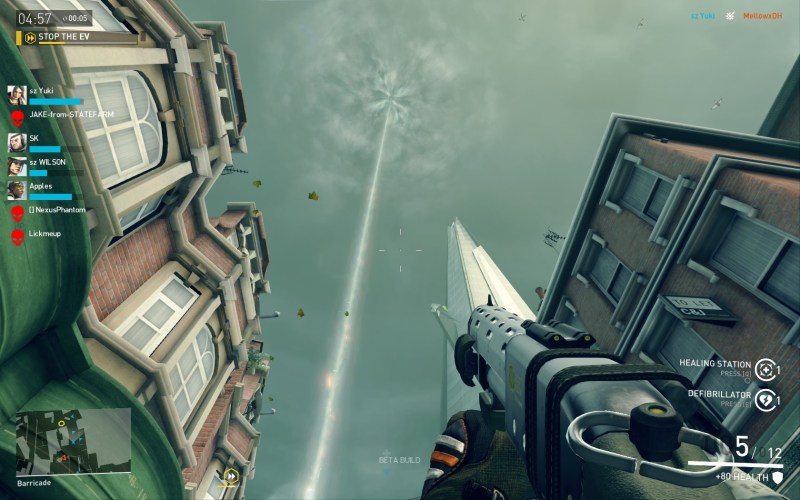 Above: Death from above.

You’re always on the move

So far, the open beta has two multiplayer modes, with the second mode being a variation of the first. In Objective matches, one team has to defend a series of points on the map while the other tries to destroy them. Stopwatch mode turns this into a competition where both sides take turns defending and attacking to see who can complete their goals the fastest. And because of the way Splash Damage designed the maps, you’re not just fighting in a big box like in other multiplayer shooters. When a team completes one of its objectives, the next goal farther down the map becomes active, forcing both teams to push forward.

For instance, when you’re on the attacking side on the Chapel map, you have to repair a vehicle and escort it down a winding road. The other team can disable the vehicle by shooting at it, making it stall until someone on your team repairs it. Once it arrives at its destination, you have to take a pair of EMP (electromagnetic pulse) bombs and plant them at the base of a building to win the match. What makes Chapel difficult is that it contains a lot of areas that your enemies can hide in or where they can spring traps on you. Most of it takes place outdoors, too, so the escorting team is susceptible to Skyhammer’s air strikes or Kira’s orbital beams.

The rest of the maps also have multiple points of contention, as well as secondary objectives that can help or hinder the attacking team (like turning on the fans in the Terminal map to pump out the noxious gas in an underground shortcut). Unless both sides are in a stalemate for the entire match, you won’t be stuck fighting in the same area for long. 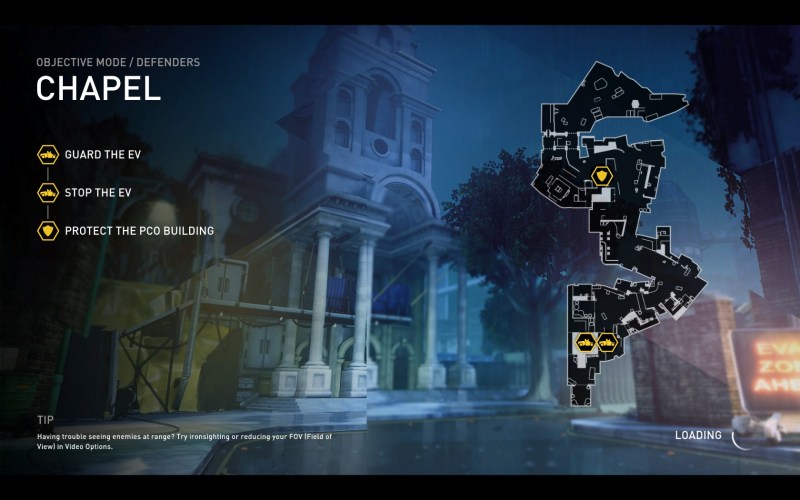 Above: The Chapel map sort of has an “S” shape.

It didn’t take long for me to burn out on the two multiplayer modes and five maps that Dirty Bomb launched with. The near-future setting doesn’t help as it turned a beautiful city into a boring series of industrial areas that were tiring to look at again and again. Aesthetically, nothing about the game popped out to me. Playing with new Mercs and learning what type of strategies they add help alleviate this feeling. But even the characters look a bit bland with their machine guns and camouflage clothing.

Public matchmaking is a crapshoot

Success in Dirty Bomb relies on how well your team is working together. Are there enough medics to watch your back? Do you have teammates who can drop a continuous supply of ammo packs? You never know what kind of group you’ll end up with when matchmaking with strangers. Sometimes you have a good team who knows how to help each other out … and sometimes you don’t. It’s not so much a fault of the game as it is people who are still learning how to play. At the time of this writing, Dirty Bomb has been in open beta for less than two weeks.

But it’s still frustrating when medics — who are obviously safe from gunfire and have time to revive people who are right next to them — ignore your almost-lifeless body as they sprint to the next area.