The game’s director, Masahiro Sakurai, made the announcement today during a special E3 digital presentation.

Ryu is the first Street Fighter character to appear in the franchise’s history. Sakurai said both his look and fighting style is based on Street Fighter II. Players can combo light, medium, and heavy attacks by tapping, pressing, or holding buttons. One button press also activates Ryu’s traditional Hadoken and Shoryuken moves, but players who manage to enter the original combinations from the Street Fighter series will perform more powerful versions with higher damage.

Sakurai also announced the addition of Roy to the roster. The Fire Emblem character last appeared in Super Smash Bros. Melee for Nintendo GameCube in 2001. This new version of Roy is a close-ranged fighter who can unleash a devastating sword blow as a Final Smash move.

Rumors about Ryu and Roy’s addition to the roster began circulating after hackers datamined a recent update file for Super Smash Bros. for Wii U, according to Polygon. Two YouTubers posted videos early Saturday allegedly taken from the update depicting some of Ryu’s moves in action, but Nintendo got those removed.

Both Ryu and Roy are available to buy starting today on both the Wii U and Nintendo 3DS platforms. Roy costs $4 on either platform, or you can buy both game versions together for $5. Ryu, meanwhile, costs $6 and includes a bonus stage from the Street Fighter series called Suzaku Castle. Buying the Wii U and 3DS versions of Ryu and Suzaku Castle together costs $7.

Previously announced DLC character Lucas is also available starting today. He costs $4 on either the Wii U or 3DS platform, or you can buy both versions for $5. 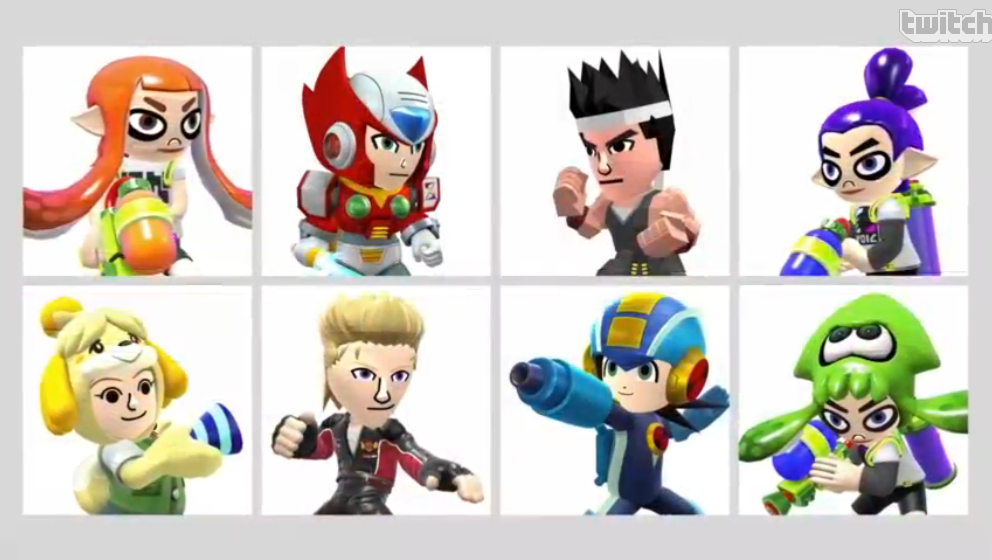 Above: Nintendo is adding eight costumes to Super Smash Bros. for Wii U and 3DS.

In addition to the new playable characters, Nintendo is adding new Mii Fighter costumes and two new stages. The costumes are based on the classic fighting game Virtua Fighter, Isabelle from Animal Crossing, MegaMan.EXE, Zero from Mega Man X, and the Inklings from Splatoon. All eight costumes can be bought for Wii U or 3DS for $6. Paying $9.20 will get you both game versions. They can also be purchased individually on either the Wii U or 3DS for $.75, or you can spend $1.15 for both versions.

The new stages are a Dreamland stage from the original Super Smash Bros. for Nintendo 64 and a Miiverse stage where players around the world can leave posts for others to cheer them on during battles. The messages will be pulled from individual Miiverse communities that Nintendo just opened for each Super Smash Bros. character. The Dreamland stage is $2, or $3 if you want both game versions. The Miiverse stage is free.

Players who want every fighter, stage, outfit, and accessory featured in today’s announcement can buy them all at once for $21.96, or $29.16 for both versions.