The popularity of the Despicable Me movies and their lovable minion characters has been a godsend for mobile games. Gameloft’s Despicable Me: Minion Rush, released in June 2013, has been downloaded more than half a billion times. Now, Electronic Arts has a license to make the next mobile title, dubbed Minions Paradise.

Mike Rasmussen is responsible for making that game into a huge success when it debuts this summer. Rasmussen is the general manager of a new mobile game studio that EA owns in Salt Lake City. He’s also the executive producer on the Minions Paradise title. The game already has a lot going for it, as the first two Despicable Me films have generated more than $1.5 billion in box office revenues since 2010. A new movie is in the works for the minions, releasing on July 10, and a third film is coming in 2017.

Minions Paradise stars Phil, a cute minion who can’t do anything right. He causes a shipwreck in the second film, and the minions wind up stranded on a tropical island. His job is to use the stranded minions to turn the island into a paradise. We got a hands-on demo of the game recently at a preview event, and we interviewed Rasmussen about his approach to the title. 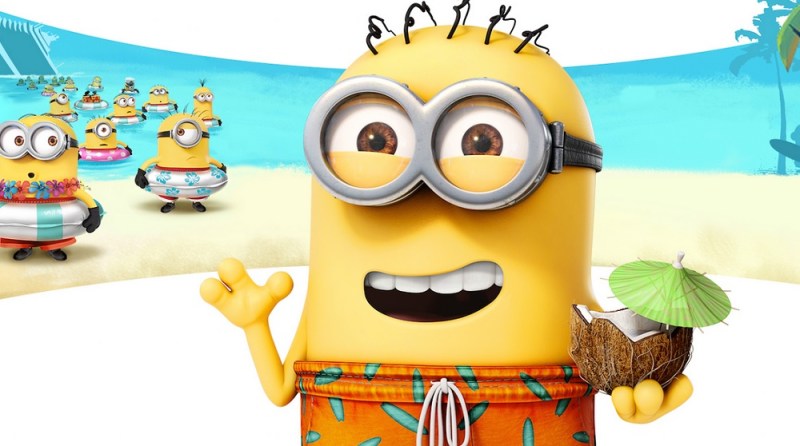 Above: Phil, the star of Minions Paradise, makes a theme park on his island.

GamesBeat: How did you come on board with EA?

Rasmussen: EA’s had a studio in Salt Lake for years. I joined a year ago to run this game.

GamesBeat: What have they specialized in over the years?

Rasmussen: It was mobile and casual games. We grew the studio. When I joined, there were 12 people. It’s now 65. We’ve grown significantly.

GamesBeat: Did this license make it all possible? Minions used to be Gameloft, as I recall.

Rasmussen: We licensed this from Illumination. We worked very closely with them. It’s been a very close collaboration. They’ve been a great partner to work with, to get that creativity in the game. Great animations, great stories. That comes as a result of our collaboration. We have full-time people on the ground at Illumination every day.

GamesBeat: Of all the things you could do, how did you narrow it down to this style of game?

We want to deliver, first of all, minions, minions, minions. Players are coming to our game to play with minions. Second, we want to deliver a very casual experience, something that’s very wide, that any player can come into, but that has enough depth to keep them interested for a long time. Third, we wanted to innovate on the builder genre. We’re all huge fans of builders like Hay Day. We felt we had a chance to innovate and go in a new direction.

One thing I’m proud of is the minigames. We want to have players see these games, or see these items in the world, and constantly ask themselves, “What cool thing are the minions going to do when I get there?” And we want to pay that off over and over. That’s why they’re coming to the game. They want to have this interaction. When they see a fishing dock off in the distance, they’re going to play the game to get there, and when they get to that dock something is going to happen that they didn’t expect.

Rasmussen: We didn’t actually arrive at it that way. We just thought, “How would players want to interact with the minions?” There was this iconic image in Despicable Me where all the minions go to this island. There’s a water slide in that image that we actually put in our game. It just captured the feeling that we wanted to go for. We want all the minions to have their ideal place and to have the players be able to create that place for them. Paradise just worked.

One of the things I think works well is that when people play mobile games, they want to have a short escape. The idea here is that you’re going to take a little minions vacation and go to this paradise for a moment to escape. 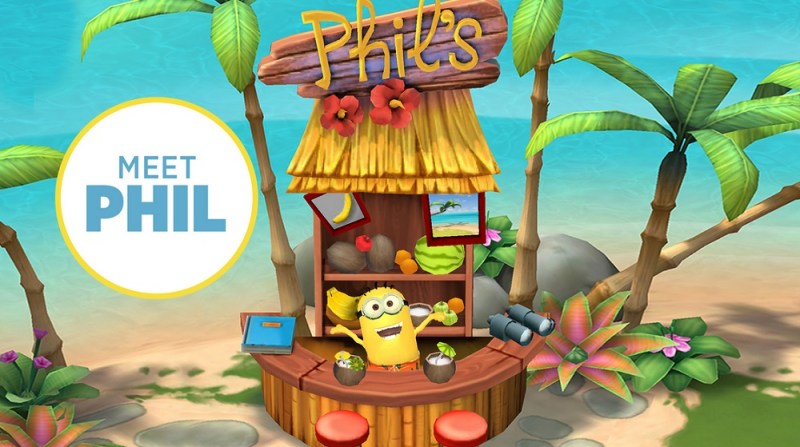 Above: The mobile game action starts at Phil’s shack in Minions Paradise

GamesBeat: Do you have a ship date yet?

GamesBeat: How much time will you have wound up working on it?

Rasmussen: I’ve worked on it for a year. When I arrived, it was in a kind of concept phase. We had a prototype and a basic design. We’ve been working on it full bore for a year now.

GamesBeat: This whole branding thing in mobile is getting big this year. Kim Kardashian got it all going in a big way. What do you think of that context for this game?

Rasmussen: When we look at mobile, we know that it has a very broad reach. When you can bring in properties like Despicable Me, it allows you to extend that reach and to create something that players are looking for. They want to have touch points with brands that they love on the platforms they use. It just makes sense for us to partner with people like Illumination, who’ve created arguably the most important and valuable animation brand in the world right now.

Rasmussen: It was. I was a huge fan. I still am. I play it pretty often.

GamesBeat: Is there some thought to trying to move the bar to get more people to spend money in something like this?

GamesBeat: What I remember about the last game is that it showed up much higher on the download charts than on the grossing charts. I don’t know if that means advertising is the way to go.

Rasmussen: For us, it’s just a matter of getting as many players as we can in the game. Advertising probably isn’t going to be a big part of this game. 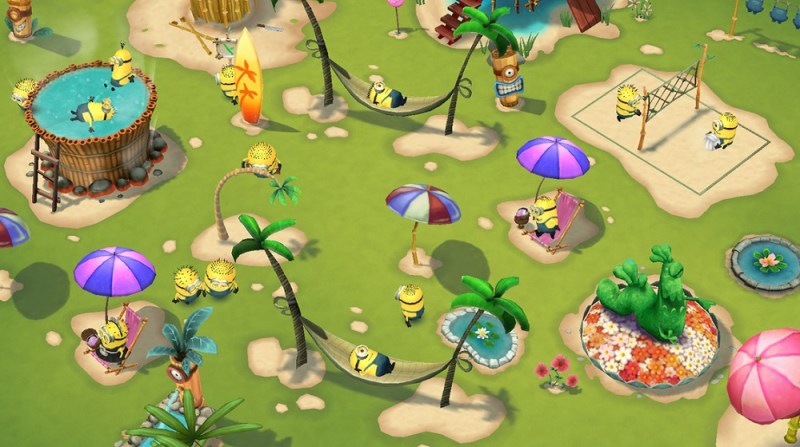 Above: A screenshot from the Minions Paradise game.