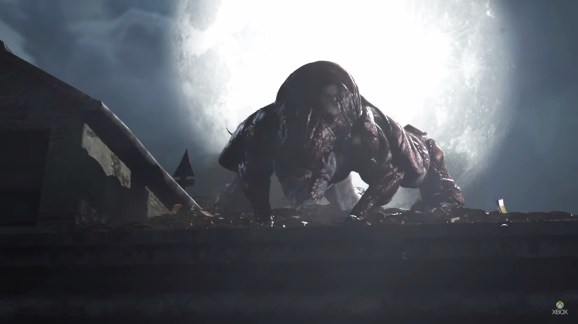 LOS ANGELES — Microsoft confirmed one of its not-so-secret secrets today: Gears of War 4 is coming to the Xbox One.

The game under development with a new Microsoft studio, Vancouver, Canada-based The Coalition, formerly known as Black Tusk Studios. It’s an important game for Microsoft because, like the Halo series, Gears of War is one of the exclusive franchises that shows hardcore fans that Microsoft cares about them.

The company showed off the gameplay of the new Gears in two-player co-op mode, with both a new female character and a male character. The graphics looked superb, and the lighting seemed much brighter than the usual Gears game. In the demo, they discover an orange pod, get covered in orange goo, and then run into a whole collection of orange pods. That, of course, leads to an encounter with some scary monsters that try to eat them alive. And that forces the Gears characters to pull out their chainsaw bayonets.

Meanwhile, Microsoft said that it would release a remastered version of the original Gears of War, as the Gears of War Ultimate Edition, for the Xbox One. The game would feature 1080p, 60-frames-per second multiplayer combat.

Rumors of an Xbox One version of Gears of War leaked out in recent weeks, along with some images. Microsoft finally confirmed the news at its press briefing at the Electronic Entertainment Expo (E3), the big gaming trade show in Los Angeles.

Gears of War is a third-person sci-fi shooter that first debuted on the Xbox 360 in 2006. The series has been a Microsoft exclusive, and its last installment was Gears of War: Judgment, which debuted in 2013.