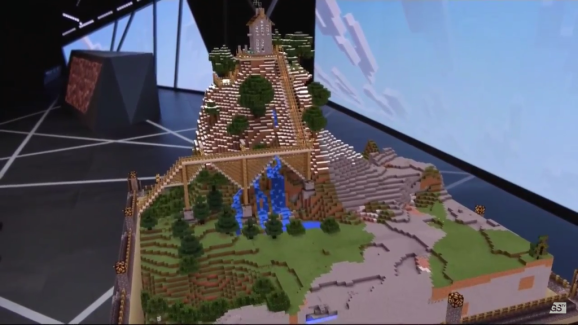 LOS ANGELES — Microsoft is about to turn your world into a virtual toy.

Minecraft is coming to the Windows HoloLens augmented reality device (and competing take to the Oculus Rift, Sony’s Project Morpheus, and Valve’s virtual reality headsets), which is launching later this year. The publisher showed off how the game will work during its Electronic Entertainment Expo media briefing this morning. Minecraft on Microsoft’s augmented-reality device is compatible with the PC version, and you can play it just like normal. That means the HoloLens will create a video window, and you can play the game through with a controller. But it doesn’t stop with that. HoloLens also enables you to re-create your virtual world on a surface like a table. This enables the player to look down over the whole world from a god-like position.

From this omnipotent position, players can pinch and zoom and mold the world to their liking. They can also look down at the little avatars of the other players in the world.

It is an incredible example of what augmented reality can accomplish, however, we should point out that HoloLens has does not have a full field-of-view screen like the Oculus Rift or HTC Vive. Instead, you look through a smaller window that layers video over the rest of your world — so it’s possible that the above demo makes it look more amazing than it really is.