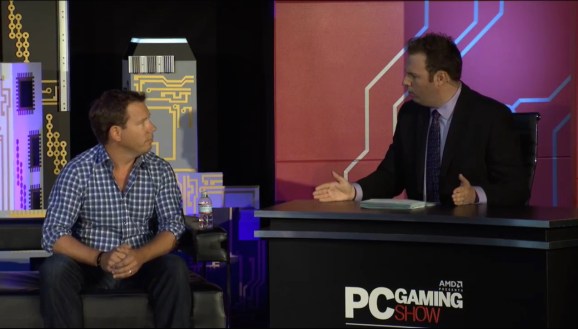 Cliff Bleszinski is happy to be back to work.

After leaving Epic Games in 2012, the game designer known affectionately as “Cliffy B” took an extended break from the industry. But the downtime was too boring, he told the audience at the PC Gaming Show during the 2015 Electronic Entertainment Expo in Los Angeles this evening.

“I had fun during the time period I had off,” he said. “I mean, I’m not gonna lie. Hanging out, reading books by the pool, is a lot of fun. But honestly, I got really bored. And I saw other people announcing their games, I saw trailers, I saw interviews, and I’m like, ‘I miss this stuff. I miss being a part of it.'”

While he didn’t show game play footage during the interview, Bleszinski did talk about the shooter’s biggest influence — Counter-Strike: Global Offensive. “For some reason, CS: GO is all I want to play lately,” he said. “Counter-Strike to me is still the most entertaining FPS I’ve ever played. And when you look at the skill levels of the players on those servers, it’s second to none. It’s one of those games that every time I play it I get a few more kills and I get better and better at it. That’s really what I’m gunning for [with Project Bluestreak], is the thing that’s easy to learn, lifetime to master.”

Another big influence on Project Bluestreak’s development is the age of the people creating it. “I turned 40 this year, right? I can’t aim as well as I used to. I play CS: GO, and I have my ass handed to me in the [public matches]. It’s horrible. It’s bad. So, what we’re finding is the older studio members were making characters and weapons that were easier for them, that they can aim. So, it’s more like area-of-effect type weapons. Whereas the younger folks in the studio who are, you know, 20s and whatnot, they just cream everybody with the high-precision weaponry in the game.”

“I find that with the kind of game we’re making right now there’s so much more room for unique weaponry in a FPS that’s not just a shotgun or an AR-15 or a rocket launcher,” he added. “There’s a lot of unique twists you can do in the sci-fi space that make things really interesting and unique.”

Cliffy B also briefly talked about his game’s esports potential. Although he said “esports” is a buzzword that everyone slings around, he listed some ingredients he feels are necessary for success in that genre.

“In order to make a game in esport, you have to really make something that’s skill based, that has an amazing community. Respect that community, and work with that community to build up, to actually hopefully have people play the game professionally and, you know, sometimes make more money than developers [Laughs].”