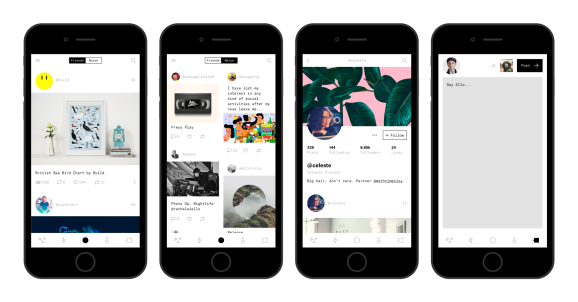 The Ello mobile app is here and it’s better than you’d expect.

Ello is a social media platform built on the promise of no advertising that attracted a lot of attention last summer when thousands of people started signing up for the network. To prevent the site from overloading, the company made the service invite only, which in some ways only further fueled demand. Shortly thereafter it won investor funding, bringing its total funding to $10 million.

But, in early fall of 2014, Ello failed to deliver the social experience that most people were looking for. The company says the site wasn’t prepared for the sudden onslaught of users, and it only really offered the most basic functions, like the ability to create posts and follow other users.

Now, not quite a year later, the company is flaunting a new mobile app for iOS. The app is sleek and maintains much of the simple black-and-white theme that its website features. Off the bat, it addresses one of the website’s early flaws: how to get your friends on it. The Ello app hooks into your contacts to find and invite friends on the network. Like most other social media apps, it allows you to post content, comment on friends’ posts, follow other users, and discover interesting people on the network. Soon it will also add direct messaging.

When I asked Ello founder and CEO Paul Budnitz if he has a strategy for reengaging some of Ello’s early adopters who may have dropped off, he shrugged.

“When Ello is right for you, you’ll use it,” said Budnitz, dark brown beads wrapped around his wrist.

Though Budnitz may seem unconcerned by user growth, he’s still thinking ahead to how the network will eventually make money. Though many have scoffed at his decision to avoid advertising, Budnitz has managed to come up with an alternative route to monetization: Ello is planning an ecommerce play.

Early next year, Budnitz said, Ello plans to start allowing people on the network to sell their creative services and artisanal wares through posts. Artists and small businesses will be able to post products for sale in their stream and Ello will facilitate the transaction (likely with some sort of buy button) for a percentage of the sale.

Creating a community around creative services very much follows in Etsy’s footsteps, an ecommerce company that has seen much success by staying loyal to its community and following a code of ethics.

Following this path could help Ello get rid of a certain expectation that the social network will be, or even aspires to be, the next Facebook. From the get-go Budnitz framed his app as an alternative social network, free from ads and data collection. Some saw this as a challenge to Facebook, but Budnitz said that was never his aim.

“We’re not trying to build the Walmart of social networks,” he said.

For the most part the new mobile app just brings the “millions” of users already on the Ello network into the mobile landscape. However, it could also serve as the right tool to get a few more people thinking about Ello again.