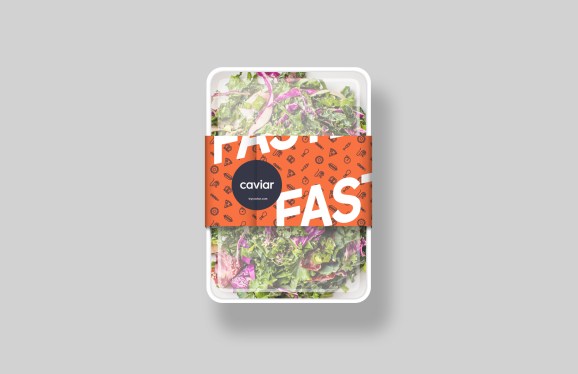 This is Fastbite’s first expansion since being acquired by Square in April. The service will be available to New Yorkers through the Caviar app for lunch only. Fastbite offers two to three meal options daily and promises to deliver meals in under 15 minutes for less than $15.

Before Square acquired Caviar, the service was mostly known for delivering food from high-end restaurants that don’t usually deliver. Caviar was naturally more expensive than most food delivery apps, and this likely worked against the service in attracting a broad base of customers. The Fastbite acquisition and subsequent integration with Caviar is supposed to help bring the delivery app back down to earth, where the rest of us live. Fast, cheap, delicious meals appeal to everyone, not just the one percent.

When I tried out the service yesterday, it worked as advertised — though the experience wasn’t quite what I wanted it to be. My order of a falafel burger salad from Black Tap Craft Burgers & Beer arrived eight minutes after I ordered it. There was some confusion about where I was supposed to meet the delivery guy, and I ended up coming down to the front of the building to retrieve my food. My expectation was that the food would be delivered to my office, but it turns out that Fastbite doesn’t have that luxury.

In order to make those 15-minute deliveries, delivery men and women ride around the city on bikes equipped with meals. The app pings the nearest delivery person and then they make the delivery. It really is the Uber of food.

That said, the falafel burger and accompanying salad was good and noticeably fresh — no wilted lettuce to be found. It was also ten dollars, slightly less than I ordinarily spend for lunch in New York.

Indeed, this could be the service that helps Caviar catch on, pushing Square more deeply into the restaurant business.