BuzzFeed is launching a mobile news app that focuses on supplying quick, digestible bits of information to contextualize the top stories of the hour.

The BuzzFeed News app will be rolling out to iOS devices this morning. The company plans to launch an Android version this fall.

Stirrings of a news app first appeared last year, when the company started hiring journalists to work on a mobile app.

The new app features a brief list of the top stories from the hour along with snippets of news pulled from BuzzFeed and other sources around the Web. What’s most compelling about the app, though, is not the curation, but the added content that comes from having a dedicated editorial staff working on the news app. Each story features an image along with a short paragraph explaining the news. Beneath some stories are extras that help bring context to news bites, including graphs, bullet-point lists titled “what we know so far,” and other background information such as relevant tweets. In some cases, the news app will list multiple stories concerning a single topic. For instance, coverage of Rachel Dolezal, the NAACP leader in Spokane, Washington who recently stepped down from her post, garnered three separate stories. 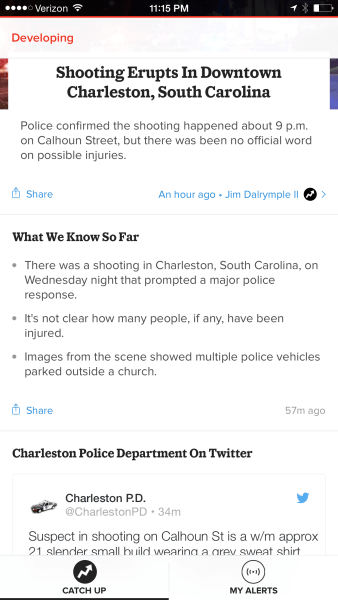 The team said it learned a lot about how people interact with news from its News newsletter, which comes out five times a week. Two of the most important lessons, they say, came from learning to never rely on the reader to take the extra step to interact with a piece of content — and to be OK with letting go of the traditional news format.

“One element of this is weaning yourself off this idea that your article is going to be interacted with as it was when it was originally published on Buzzfeed.com,” said Stacy-Marie Ishmael, editor of the BuzzFeed News app. This understanding allowed the team to develop an app that doesn’t require the user to click through to stories. Instead, users can get the news they’re looking for simply by interacting with BuzzFeed’s various lists and timelines.

It’s this breaking down of the news that could make the BuzzFeed News app very sticky. For now, BuzzFeed only integrates tweets, Vines, and GIFs into its News app, but it’s planning on incorporating Instagram photos, YouTube videos, and audio from SoundCloud.

Many in the news media have been trying to break the code for high engagement on news apps. The New York Times played its hand with a paid app called NYT Now. Despite accolades, the app didn’t see the level of engagement that the Times had hoped for, and it subsequently took the price tag off.

BuzzFeed has built a reputation for giving people what they want. Already the company has two apps, including Cute or Not, a Tinder-like experience for showcasing household pets, and a native app that features content from the BuzzFeed website. But its News app may be its best mobile product yet and, if it proves popular with its users, could serve as a template for other news apps going forward.