When Pixar’s newest film, Inside Out, came to fruition, the teams at Disney knew they wanted to create a mobile game, among other ancillary content, to go with it. But it wasn’t obvious how to take a cerebral and emotional film like Inside Out, which is about the emotions that go on inside a young girl’s head as her family moves from Minnesota to San Francisco, into a game.

The movie takes abstract concepts like emotions and turns them into characters like Joy, Sadness, Anger, Disgust, and Fear. They each have a different color, and when something happens to the main character, Riley Anderson, she forms a permanent memory. Inside her head, that memory takes the shape of a big glass marble with a color, associated with the emotion that dominates it, such as gold for Joy or blue for Sadness. The idea of taking that little ball and turning it into an orb in a bubble shooter game became the basis of the mobile game.

We talked with Tim FitzRandolph, vice president of creative at Disney Mobile, after a screening of the film at Pixar’s headquarters in Emeryville, Calif. He told us how the process worked of hearing about the film and translating it into a mobile game, Inside Out: Thought Bubbles, which debuts on mobile devices today. 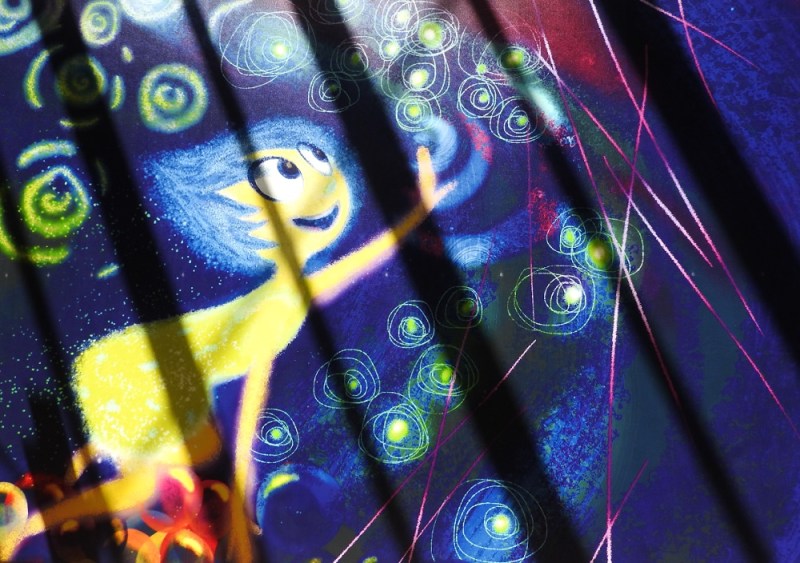 Above: Mural of Joy from Inside Out at Pixar headquarters.

GamesBeat: When did you get started on the mobile game? 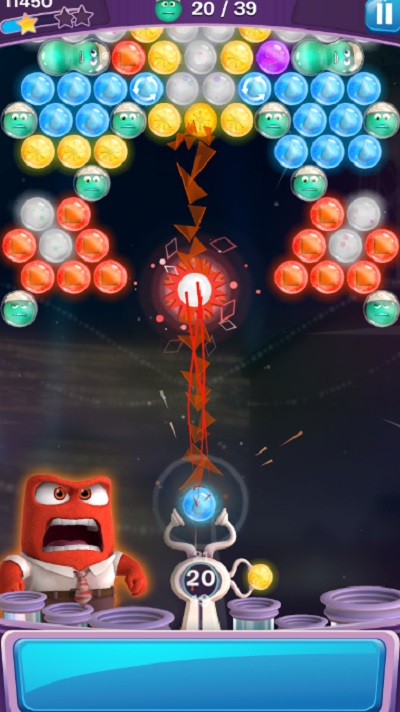 Above: Inside Out Thought Bubbles

Tim FitzRandolph: We first got a chance to see what was the film at that point about a year and a half ago. We spent a few months deciding what we’d make, making prototypes. The game itself took about a year to make.

GamesBeat: The movie itself probably didn’t change too much?

FitzRandolph: It depends from movie to movie. Some do change a lot during that duration. This one didn’t, very much. The first time we saw it, it was just a storyboard. But most of the story, the main story, was what you saw today. Just a few changes with regard to the tone of the movie – how much humor, how many emotional strings to pull, that kind of thing. It was great, because we knew exactly what the movie was going to be. We had a nice target to shoot for.

GamesBeat: How soon did you think of the bubble comparison to some of the things in the movie, like the little memory balls?

FitzRandolph: It seems super obvious, but it wasn’t immediate. We saw the screening and we were absolutely convinced that this was an amazing movie. It was going to be a general-audience, kids-to-adults appealing movie, which was perfect for us making casual games. We knew there was a great fit. But we were so impressed with the world they had created that we wanted to come up with something that would evoke all the stuff in the world. Some of the more obvious game genres didn’t seem to allow for that.

We tried a bunch of stuff. We prototyped tons of different ideas. One of our prototypes that survived the longest was a solitaire card game. We had these cards that represented the different emotions. We’d come up with a rule set that tried to evoke what it’s like in Headquarters when they’re dealing with different scenarios. We were pretty happy with that game. We felt like the themes of the movie were well-represented in the gameplay. But the more we played with it, the more we realized we were straying from our goal of making an accessible and simple game people would be able to pick up and enjoy across a wide age range.

We went back to the drawing board, and that’s when we were looking back at the materials, looking at the memory orbs. We thought, “These are definitely gameplay objects somehow. They’re primed for it.” The film has taken such an abstract concept and turned it into a physical space with physical rules that apply to them. A memory becomes an orb and goes down this way and over there. The physicality of it, the orbs clinking together and everything, led us to—“Wait a minute, they’re color-coded, too!” We had this game type that we all love. We’ve played it in the arcades and on PC and on modern platforms.

GamesBeat: The other possibility would be match-3, it seems like.

Fitzrandolph: Match-three could work. We did prototype match-3s. But when we talked about the bubble shooter, Bust-A-Move genre, the main difference was that it’s more physical. The ball travels and bounces and sticks where it hits. It’s a more analog, physical implementation, whereas a match-three game on a grid is more abstract. There isn’t any real physical rule that applies.

GamesBeat: Another one for you: pinball.

FitzRandolph: This game is sort of the simple, accessible parts from a match-three game, but with the physicality of pool or pinball, where you’re thinking about rebounding. Can the ball fit through there? There’s a skill element to it that’s nice. You can make a good shot or you can screw up a shot, which is a nice balance for a game.

GamesBeat: Did you ever consider doing multiple games, or did you always want to do just one?

FitzRandolph: We definitely wanted to focus on one, both for practical reasons and also just because our goal is to make—our games on mobile, we update and support them continuously. We treat them like a service. Landing on one that was a fertile game that we felt could continue to be interesting and have variety that lasts for a long time was important to us. The genre fits well with that. We can continually add new goals, new gimmicks in the levels that are pulled out from the movie. We have a lot of natural connections there. It felt like a good fit.

GamesBeat: Does it weave the movie’s story into it?

FitzRandolph: It’s very light. I feel like this is not the best screen to be telling a story on. Not to mention that the method of interaction is short and spread out. Rather than even attempt to do any kind of justice to the story we were so inspired by, we decided to focus more on letting you spend more time in the world. That’s why the map takes you on a loose journey through the locations of the film, but mostly as a way of letting you understand your progression. “If I get to that next island there will be something new in the game, some new element introduced.” Those elements are inspired more by the world and the locations and the rules and the imaginative conceit than the plot.

What story there is, it’s mostly the micro-story of an individual level. I wouldn’t even really call it a “Story” with a capital S. It’s much more light. We have a level where the mind workers, those characters who are deciding what to forget, are trapped in the level. You need to free all seven mind workers. There’s a light story – you’re down there in the world of the mind and you’re helping sort the memories that accumulate from the day, and also help the characters you remember from the film. But in a very simple, straightforward way that we think fits the platform.