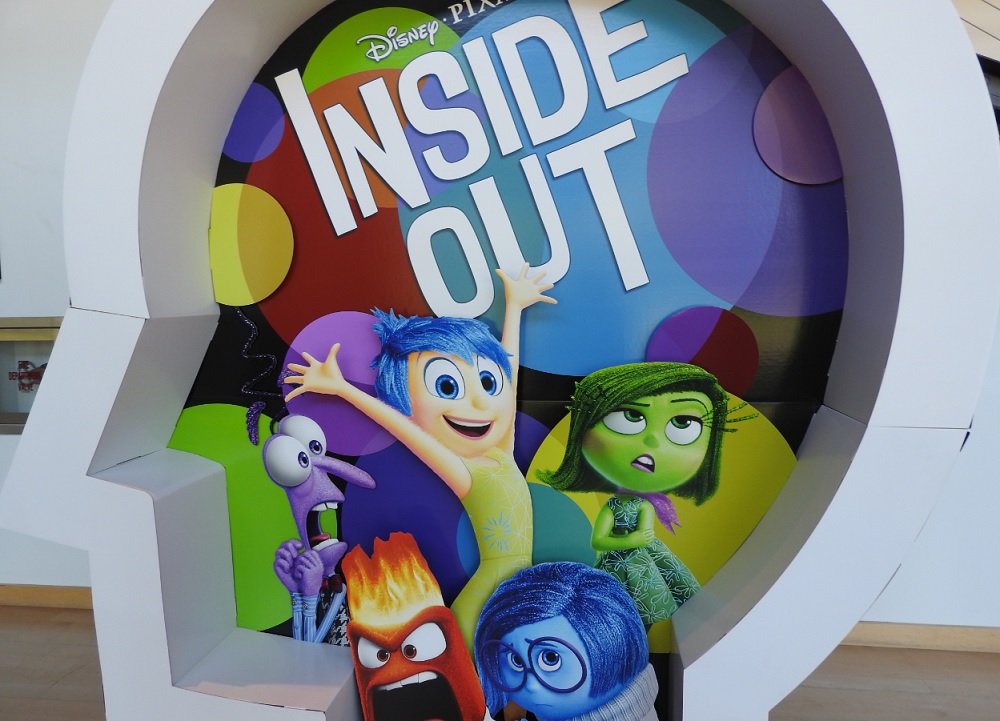 Above: Inside Out is Pixar’s new film. Disney is also making a mobile game based on it.

GamesBeat: Had you guys done this kind of bubble shooter game before?

FitzRandolph: No. This was the team’s first one. We had to create the framework from scratch. We went and re-acclimated ourselves with all the classics, to remind ourselves what was great about them. We also wanted to understand the challenges of a different input scheme. It works out pretty well, though, because you can touch anywhere on the screen. Aiming is quite intuitive.

GamesBeat: The first thing I did was try to slingshot.

FitzRandolph: Right. That’s become a mobile shorthand. You can drag your finger down below, and then we just have reversed aiming as if we’re drawing through the launcher in the direction you’re going to go. We support either one. That’s one thing about our process–It’s kind of like how Pixar has reviews where they show the film, gather feedback, repeat, repeat. We do the same thing with our team, where we do creative reviews. We have our designers who aren’t working on the game give feedback. We also do tons of playtesting and observe how players interact with it – what’s working, what’s not. Then we can improve based on what we’ve learned.

GamesBeat: Is the release the same time as the movie?

FitzRandolph: Yeah, it’s the same day. The evening of that Thursday.

GamesBeat: So that you’re able to benefit from all of the marketing happening everywhere.

FitzRandolph: Yeah. In the theater, before the movie, we’ll be in the preroll thing. The game trailer will show in the film trailers. Hopefully, people will download it while they’re waiting. 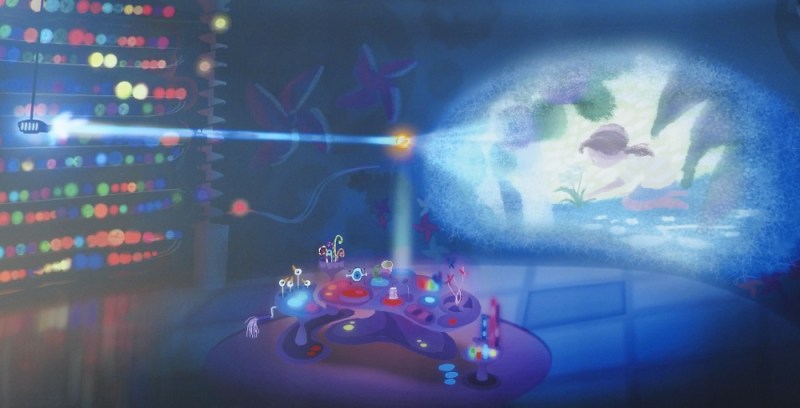 Above: Mural of Inside Out at Pixar headquarters.

GamesBeat: Is it a paid beta? 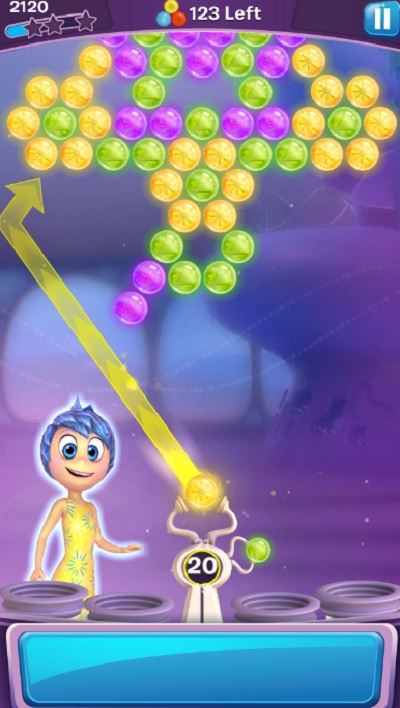 Above: Inside Out Thought Bubbles

FitzRandolph: No, it’s free. You can play the whole game for free, but it has the standard elements you’d expect that you can choose to pay for, or be persistent and patient.

GamesBeat: Have you guys done a day-and-date movie game before?

FitzRandolph: Cinderella I think was the first one? We did a similar thing with that one where we had the trailer in the theaters. That seemed to work pretty well. I’m psyched that we get to do it for this game.

GamesBeat: It does sound like you had quite a bit of time.

FitzRandolph: We did, yeah. That was nice. These games are simple, but complex at the same time. We wanted to push the quality, particularly in the characters. Hopefully it showed through in the demo, that we put a lot of effort into making the characters look true to the film and be very expressive. They’re the main link back to the film. We spent a lot of time on that. And there’s a ton of levels, of course.

GamesBeat: The Infinity folks sound as if they worked a little longer than you guys.

FitzRandolph: Yeah, I think they had a bit more time. I’m not completely sure. I believe they got to see the film even before we did.

GamesBeat: Is it usually that year-and-a-half lead-up where you get your first look?

FitzRandolph: We get different tiers. We get a chance to see or hear extremely rough pitches of things that are coming a couple of years out. That’s usually too long. We don’t want to spend that much time on something. The market moves so fast and the games don’t need that much time – at least the mobile games. It’s pretty nice, really.

We’re not quite like a console game. There’s that classic story that console games and movies take about the same amount of time to make, so there’s this chicken and egg problem as far as waiting for the movie to solidify, but then it’s too late to make a good game. We have less of an issue with that because the games don’t take quite so long. A year is a bit on the long side for us, but it was a kind of game we hadn’t made before, so that’s why we took the extra time.

GamesBeat: In the context of this year, brands are popular in mobile games. I wonder how you guys think about that. How do you say, “OK, we know we’re going to do this, but how do we do it in a way that’s not exploitative?”

FitzRandolph: It’s a concern for everyone, and not just because we take pride in what we make. You see the other products out there. If there are a lot of products that are relying mostly on their association with a brand, it makes the whole market feel like—Any time you see a heavily branded thing, is it one of those?

The main thing for our team was, we’re in an internal team. We all wanted to work at Disney and got to work at Disney. We have a little bit of a different caliber with which we regard the brand. We’re so excited to be a part of it. That shows through in the level of quality in the game. That’s the main thing we can do to combat that concern or expectation. We just do our best to make the level of quality as high as possible, to show some care and attention to the film. The reaction we’ve had from Pixar is good. They felt they were on the right side of that equation. We’re proud of that.