LOS ANGELES — Uncharted 4: A Thief’s End is perhaps the one exclusive game that could be most responsible for keeping Sony in the lead in the console war. Coming in 2016, it’s is in a state of deep development at Naughty Dog, but the designers had a chance to show off the latest interactive blockbuster action that they have in mind for the final story of series hero Nathan Drake.

Neil Druckmann and Bruce Straley, the producers of The Last of Us, moved over to take over the project in mid-development. They rebooted it and tried to focus on exactly how to meet the vast expectations the audience has for the game, which is a new chapter in a series that has defined big-budget gaming in the modern console era.

At the Electronic Entertainment Expo industry trade show, Sony ended its press briefing with a look at a wild car chase through a town, with a maniacal pursuit between Drake and his buddy Sully and an armored truck. In this story, Drake is once again apart from his love, Elena, as he has been pulled back into the life of a thief and pirate by his older brother, Sam.

Druckmann talked to us about this story and an extended version of the onstage demo of an incredible car chase that Sony showed to a small group of journalists. In a 1-on-1 interview, he set up the story for us and hinted that there are multiple meanings to the subtitle, A Thief’s End. 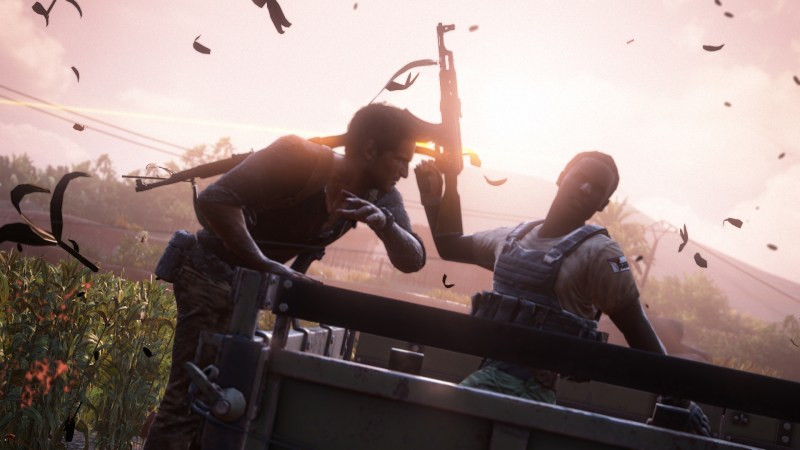 Above: Nathan Drake takes out a bad guy in Uncharted 4.

GamesBeat: Are you excited to show this off?

Neil Druckmann: Excited? Nervous? Something is happening down here. I’m not exactly sure what.

GamesBeat: You have a reputation to live up to now.

Druckmann: It’s always the same thing. It was the same with The Last of Us. You’re so in it that you lose all perspective. You hope the initial inspiration, the thing you were trying to shoot for, still holds valid. At some point you just say, “Okay, that looks bad. Let’s fix that. That could be better.” But you don’t know if the overall thing is going to come together. The way we tell is, we show it to people – we bring people in and get their perspective. It’s fun to have such a strong reception for it.

GamesBeat: What were you shooting for in this demo? What did you want to convey?

Druckmann: We want to show that this is how we’re going to do set pieces in Uncharted 4. It’s wider. You see the drivable vehicle now, which we’ve not had in the past. While you’re driving it there’s all these different roads you can take. There’s a lot of player choice there. Like in the previous Uncharteds, we’re putting our set pieces on the stick.

GamesBeat: Is there much more choice for the player in where they can go in this town?

Druckmann: It’s a big town while you’re being chased. In this demo, what you’re seeing is, you’re just going and going nonstop. But there’s another situation where you’re in the jeep and more exploratory and open. The jeep allows us to open up our layouts. You can see these vistas from a far away and then drive there. You can use the jeep in combat and to solve puzzles.

GamesBeat: From watching it, not playing it, it seems so over the top that it’s impossible that it isn’t scripted.

Druckmann: You’ll find out. When Bruce and I played, we were sweating bullets. We’re trying to play it with a certain pace in mind, but when you play, the pacing will be different as you take different paths. You might die. You might start over. But the thing is, there’s still a cadence to it. It’s still ramping up in intensity as you go through it, while still giving you choice, still giving you control of Nathan Drake.

What you’ll see in the second half, which we haven’t shown to the public, while you’re being dragged by the rope you’re swinging left and right. I’m using the truck as a occluder from the motorcycle that’s shooting at me. Then I’m climbing up the rope to jump into the truck and shoot the motorcycle. Then the truck’s on fire. I jump in the jeep and I’m back in control of driving it. It’s all these new and old mechanics that we’re mixing and matching and trying to refine. 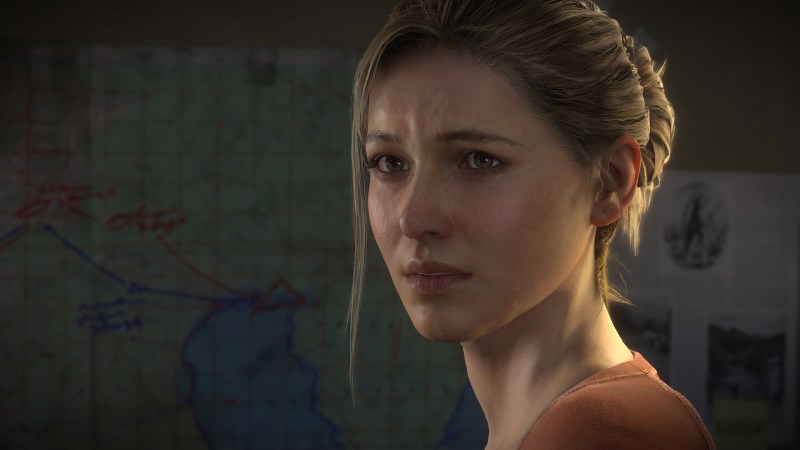 Above: Elena in Uncharted 4.

GamesBeat: There’s still a lot of interactivity inside the action scenes.

Druckmann: That’s always been the mantra for Uncharted, a playable blockbuster.

GamesBeat: We saw a lot of interesting story elements in there.

Druckmann: From the end of Uncharted 3, Nathan Drake—he was a treasure hunter, a criminal, and he’s given all that up. He’s trying to settle down. And then this brother he thought was dead for years shows back up in his life and pulls him back into this adventure. This time they’re pursuing the treasure of Henry Avery. Avery was known as the King of Pirates, one of the most successful pirates of all time, and one of the very few who got away. He was never caught.

That gives us the historical what-if. What if Henry Avery massed all these other pirates and they built this amazing utopia where they pooled all their treasure together? Nathan initially thinks he’s doing it for one reason, getting back into this world of modern-day treasure hunters, but as you saw in the demo, even though there’s all this danger, bullets flying, and the stylized reality of Uncharted, this is what he lives for. He’s an adrenaline junkie. At the end of it you see that Elena’s back. She expects him to be in another part of the world, and she catches him in a lie.

GamesBeat: “A Thief’s End.” There are multiple meanings in that title, possibly?

Druckmann: There’s a lot of thieves in this game, from Henry Avery to Nathan Drake, his brother, Sullivan, the people pursuing the treasure, the antagonists.

GamesBeat: So we shouldn’t assume that title’s about Nathan Drake?

Druckmann: We have said that this is the closing chapter of Nathan Drake’s story. This is it for him. 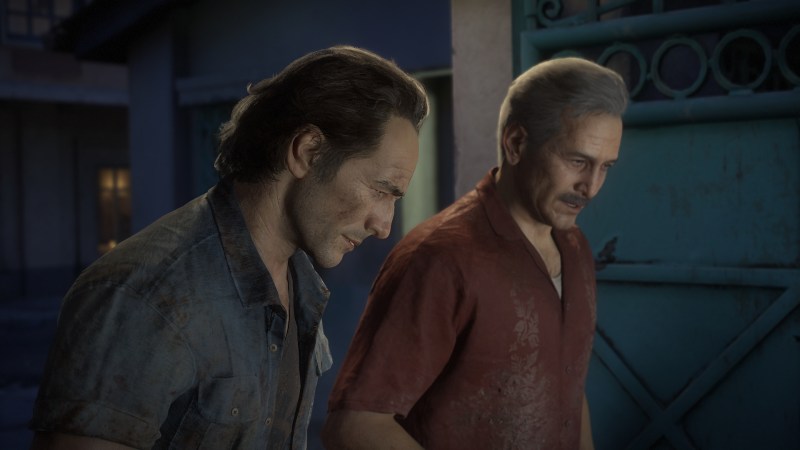 Above: Nathan’s brother, Sam, and his best buddy, Sully, in Uncharted 4.

GamesBeat: What’s it like going from one franchise to another and back?

Druckmann: The tone of these games is very different from The Last of Us. That was a very grounded, gritty, very visceral, violent game. Uncharted is kind of pulpy action-adventure. But at the heart of it the approach, for me, is very similar. It’s very character-driven. It’s all about the relationships. Even though it’s a stylized reality with these over-the-top explosions and action set pieces, good guys versus bad guys, at the heart of it it’s still telling a very human story. It’s about a guy and his relationship to the people closest to him, trying to find the balance between pursuing his passions and living a normal life. You can’t have it both ways. That’s one of the things we want to explore with the story.

GamesBeat: So it’s not just Sully tugging one way and Elena the other? It’s a new character pulling him.

Druckmann: Every character in this cast is a different facet of Nathan Drake. All these characters have evolved over the course of three games, too. We’ve seen how tumultuous the relationship between Nathan and Elena has been. Now it’s all coming to a head. You’re going to see each one of these characters being honest. We’re writing them honestly. They have their own objectives. They all have things that they want out of life and that they want out of Nathan. He can’t align all of that together along with what he wants.

Druckmann: [Laughs] Well, Nathan is pretty shady too. But yeah, I think everyone’s a little shady in this world. You’ll find out in exactly what ways. 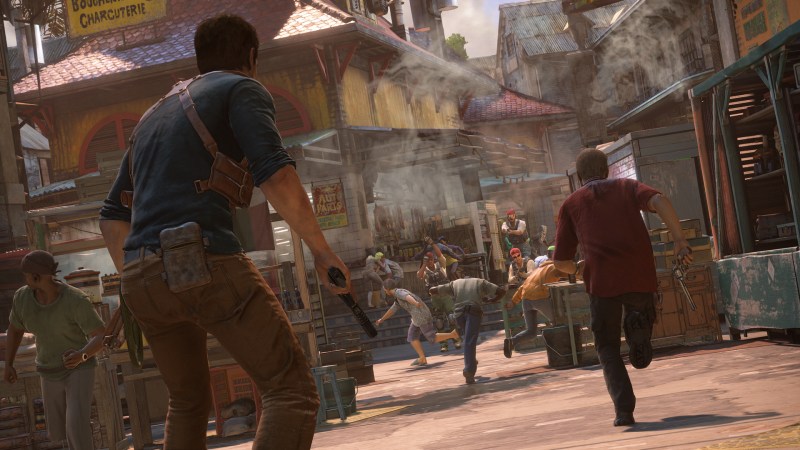 Above: A foot chase in Uncharted 4.

GamesBeat: This project’s been a long one. Has it changed around some? I understand some of the leadership has changed. Can you talk about that? Is this a game that started one way and went in another direction?

Druckmann: Bruce and I came on the project when it was already a little bit underway. When our bosses asked us to direct it, we had to make it our own. A lot of it was just assessing where the project was at. How do we make it personal to ourselves? How do we bring over the things we learned from The Last of Us? Then it was just working with an amazing team of people who we’ve worked with back to Uncharted one and making the best Uncharted we can.

GamesBeat: Did you want to go off to the next Last of Us originally?

Druckmann: I wish I knew what I was making next. No, we were actually in the process of trying to figure out what the next thing was going to be when we came back to Uncharted. That’s been put on ice. It’s all hands on deck for Uncharted 4. Our brain cycles are all focused on Uncharted 4. We’ll see what happens after that.