Five years from now we may look back at the first Apple Watch and see a very limited device embraced only by Apple-heads, nerds, and people wealthy enough to buy one just for the novelty value. The first Apple Watch is largely a notifications device — highly dependent on the iPhone and limited in communications utility.

This is no knock on Apple. There has to be a first version of any new device, and it always gets way better with time. In the case of the Watch, the “way better” may be coming next year.

A new report from Mark Gurman at 9to5Mac says that the second generation Apple Watch, coming in 2016, will include a front-facing camera for Facetime calls, a better wireless system, and more independence from the paired phone.

Gurman’s sources add that the battery life of the next Watch will be about the same as that of the first Watch, indicating that Apple is working hard on bringing power efficiencies to the WatchOS operating system.

The addition of the camera is huge news, especially if Apple opens that camera to third-party app developers, who can incorporate it into their apps. For instance, a video messaging app like Glide would suddenly work on the wrist, not just on the phone. Facebook Messenger might add live video messaging from the wrist. 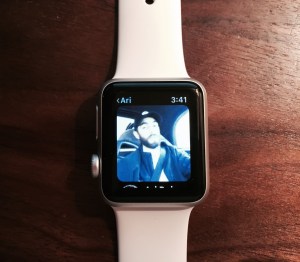 Above: Glide video messages currently can be viewed on, but not sent from, the Apple Watch. The next Apple Watch may permit both.

Video chat from the wrist — especially real-time chat — will require a lot of Wi-Fi bandwidth, so it’s no surprise that Apple is reportedly working on the wireless radio and software in the Watch. If the video messaging becomes a primary means of communication for some users, battery life may become a very serious problem for Watch engineers.

The camera could potentially be used outside the realm of communications, too. Used in tandem with the NFC chip in the Watch, a facial recognition feature could become a powerful security and authentication feature. Your Watch might recognize your unique face, then instruct the NFC chip to send a message to a chip inside a smart door lock to “open.” This, however, depends on an Apple decision to open up the NFC chip in the Watch to third-party developers. That hasn’t happened yet — not even in the phones. Hope springs enternal.

Apple announced a new version of WatchOS at its Worldwide Developers Conference earlier this month. The new OS will allow developers to build apps that run on the processor inside the phone, that access the web directly from the Watch, and that can access physical features of the phone like the digital crown, microphone, speaker, and heart monitor. The next wave of apps that exploit these changes will be far more interesting than the first wave of Watch apps.

But the addition of new physical features — like the camera — in a second generation of the Watch could be game-changing. The camera could be the feature that finally convinces mainstream consumers that the Watch is no longer a novelty, and that they need one in their daily lives.

If these new feature do end up getting added in a 2016 release of the Watch, I suspect that a lot of first-generation Watches will get thrown into the Drawer of Fallen Wearables. And what about the ones that are made of gold? Will Apple start a trade-in and melt-down program?