GamesBeat: I like how the cloud seems to address the problem previous generations had with the consumer exhaustion of having to buy 50 more songs on another disc. All they really wanted was more songs. The cloud seems to make a big difference.

Hirshberg: It is Guitar Hero TV. It’s like MTV when we were growing up, except now we can play it. It has that curated stream of videos that pass. The only difference is that now it’s a video game. 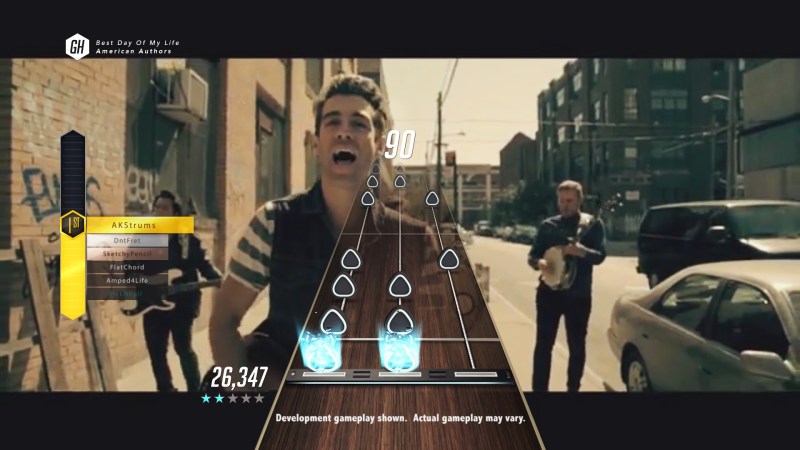 GamesBeat: Was that idea almost cooked independently of the game itself?

Hirshberg: I remember when Freestyle brought it to us. Live was the original idea we got excited about. At the end of one of our greenlight meetings, they said, “We have this other idea we’ve been playing with, what do you think of it?” Everybody just sparked to it. For a while they almost became competing ideas internally. We were looking at GHTV and wondering if that was the big idea all on its own.

The more playtesting we did, the more we realized that they were very complementary ideas, though. We took a deep breath and did both of them. Live and the live audience gives you that super immersive, high production value, novel experience that games do so well, where they put you into an experience that you can’t have in real life. It’s very vivid and very real. TV does something very different. It keeps it current and fresh. It lets you compete online. It makes it social.

The two of them work well together in that campaign/multiplayer way that we’ve seen in Call of Duty. One of them is a visceral, high production value experience. The other is something you can do for months or hopefully years with your friends.

GamesBeat: I got a quick look at the piece you wrote about creativity in leadership here.

Hirshberg: It was a commencement address, actually, that I gave at UCLA’s art school.

GamesBeat: Business leadership seems to be a lot of what gets talked about in the game industry. Creative leadership is an interesting topic, though. What’s the short version of what you’d like to convey about that?

Hirshberg: That was a speech delivered to kids who just earned an art degree. It was geared toward them, not toward business leaders. But my message to them was to not accept limitations on themselves that the world would try to put on them as creative people.

When I was asked to share whatever wisdom I’ve learned, it occurred to me that — it made me wonder why so few creative people are asked to lead things. Every other discipline in the business world is routinely considered for leadership positions — operations, finance, law. It’s almost never a creative person. Part of that is perhaps a bias the world has about creative people. Part of it is things creative people tend to do to themselves.

I encouraged the kids to think of themselves not only as creators, not only as the fuel for organizations, but as potential leaders in those organizations, and to do the work they need to do to be prepared and informed to help make the big decisions. Step out from behind the walls that we put up around ourselves. 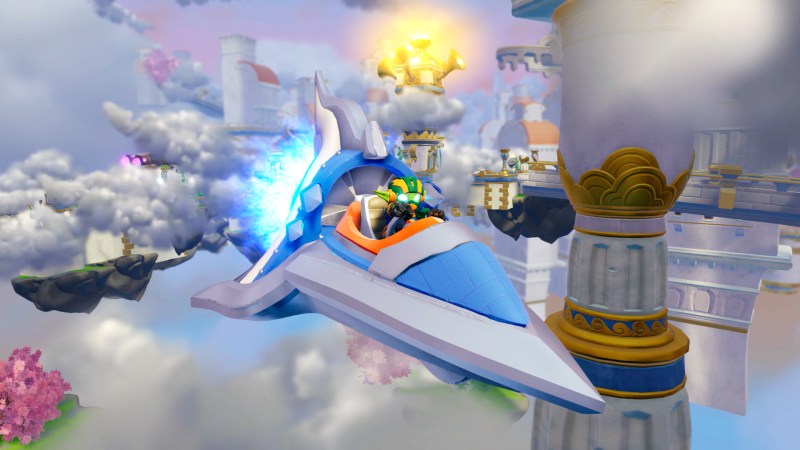 Above: Skylanders SuperChargers has vehicles like this Sky Slicer.

GamesBeat: It seems very well-suited for the game industry.

Hirshberg: I think so. I spoke to them a bit about the process I went through coming here, whether I felt like I could do it. It was a different scale for me, from the advertising business. I quoted something Bobby said to me, which was, “What you don’t know, you can learn. We can surround you with it. What you do know is unique. That’s what the company needs.” That changed my thinking on it. It represents a big shift from how most companies think about creativity. I hope more companies embrace that.

GamesBeat: That seems like an interesting topic to propose for them.

Hirshberg: It was a real honor. It was almost surreal. I sat in that exact quad where they were sitting. It feels like yesterday, but it was 25 years ago. It was one of those life moments where I thought, “Wow. What am I doing up here on this stage?”

GamesBeat: Can you apply those memories to all this?

Hirshberg: I think what I apply to all this is my inherent respect and understanding for the challenges of the creative process. As someone who’s been in the creative director’s seat for most of his life, I know that process and I know those challenges personally and intimately.

I hope that makes me able to help our creative leaders do their jobs better and provide them good guidance and give them the space in the room, the right encouragement and direction they need to do their best work. I hope I can create an environment where great work can happen, where people are encouraged to take risks, where they feel free to challenge the status quo. I look around our booth and I see our developers coming up with a lot of meaningful innovation.

GamesBeat: It was interesting to see Guitar Hero come back. It reverses that view of Activision as a company that’s been narrowing down to blockbusters. Some creativity has helped you bring something back and start expanding.

Hirshberg: I’m going to challenge the premise of your question. We’re sitting in a room with four pieces of key art, two of which didn’t exist either a year ago or two years ago, and both of which introduced new franchises and new genres of play. One of them is coming back with major innovations. I think that any impression you had that Activision was narrowing to non-creative thinking isn’t reflective of the current slate.

Even within Call of Duty—Everyone has opinions about which one is their favorite and whether things work, but no one can say that things like Advanced Warfare or Black Ops III are the same old Call of Duty games. They’re new and fresh and have lots of innovation. Even within our existing franchises, we’re innovating.