Blizzard Entertainment is hard at work on StarCraft II: Legacy of the Void, the third and final installment in the epic StarCraft II real-time strategy sci-fi series. But the team’s leaders took the time to talk to me about their progress at the Electronic Entertainment Expo (E3) last week.

I spoke with Rodney Tsing, senior producer; Tim Morten, lead producer; and Jesse Brophy, lead artist. They filled me in on the story and their plan to make the game a stand-alone title, where you don’t have to already own StarCraft II: Wings of Liberty, which came out in 2010, or its sequel, StarCraft II: Heart of the Swarm, which debuted in 2013.

The single-player campaign focuses on Protoss leader Zeratul and his struggle to unite the alien race against an ancient enemy. But the tale also wraps up the story of Jim Raynor and Sarah Kerrigan, who became the Queen of Blades.

To whet appetites for the new game, Blizzard will release a prologue entitled “Whispers of Oblivion.” It will consist of three free missions and will be released soon. Those missions will tie together the plots of Heart of the Swarm and Legacy of the Void. 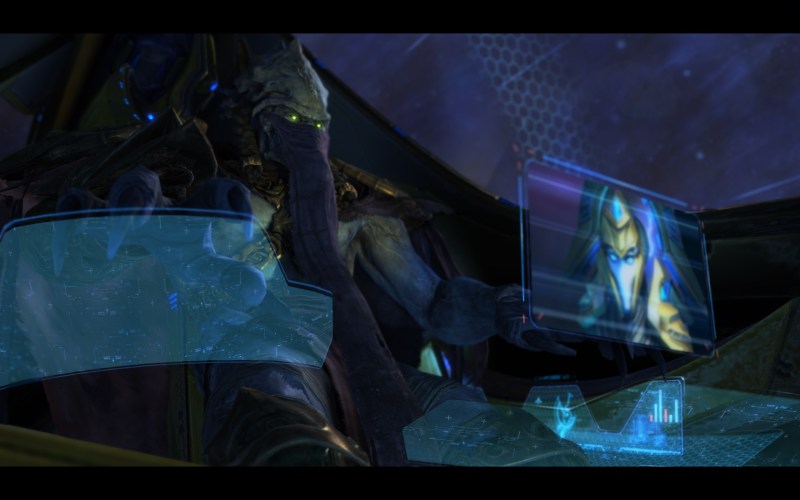 Above: Zeratul in prologue for StarCraft II: Legacy of the Void.

GamesBeat: What’s this one going to be about?

This is a stand-alone. Players will be able to start with Legacy of the Void if they haven’t purchased the first two installments in the trilogy. In addition to all the things you expect from a StarCraft game — campaign, multiplayer, new units, all that — we’re adding some big new features in the form of two new game modes.

We have Archon mode, which is shared-base PvP. You and I can launch into a mission and share a base. Maybe I handle resource gathering and build the units while you scout the map and field the army. You don’t have to worry about managing an economy at all. That way we could team up against a more advanced player. It’s a cooperative multiplayer experience. The second new mode is called Allied Commanders, which is cooperative against AI. It’s more for campaign players looking for an open-ended experience, but one that’s more social. We also have automated tournaments. We have a professional esports scene in the WCS. It’s a similar experience to a bracketed tournament, but anyone can participate in it at home.

Void is a big product. It’s not just the campaign and multiplayer. It’s all big new features. But today we’re here to specifically talk about story, and Jesse can give you a recap on that.

Jesse Brophy: At the end of Heart of the Swarm, Kerrigan finally defeats Arcturus Mengsk and enacts her revenge. She also finds out that the fallen xel’naga, Amon — she finds out what his plans are. He’s trying to combine the Zerg and Protoss DNA to create a hybrid that will kill everything living in the universe. She’s going to take the Swarm and try to hunt down the hybrid and stop him.

The Dominion is pretty much decimated at this point. Jim Raynor is going to stay behind on Korhal and rebuild the society there. Now that Kerrigan and the Swarm are busy doing their own thing, it allows Arcanis to reunite the fractured Protoss armies, go back to Aiur, and take their homeworld back from the Zerg. That leaves us with Zeratul. His whereabouts have been pretty much unknown to this point. But when he met with Kerrigan he gave her a piece of the prophecy.

Morten: At the end of the trailer, you probably caught another bit of news we have for E3. We are releasing a set of three missions called Whispers of Oblivion that tie together the story from Heart of the Swarm to Legacy of the Void. For players who haven’t played in a while, this is a chance to get back in and catch up on the story, setting up what’s about to come. Everyone will have access to these missions eventually, but those who pre-purchase the game will get early access. We’ll announce more details on that next month.

Jesse mentioned Zeratul. These missions will focus on him. Players haven’t had a chance to play Zeratul in a long time. This is getting back to the Protoss, back to Zeratul. He’s seen the end of days. He’s going to try to decipher a xel’naga prophecy and head off the end of the universe.

Brophy: The first mission is Whispers in the Darkness. It’s Zeratul coming and freeing a templar from the Zerg. The second follows Zeratul trying to gain access to this xel’naga temple that’s guarded by the fanatical followers of Amon. Finally, the third shows Zeratul going through the temple with his dark templar powers to get the last piece of the prophecy he’s been searching for all this time.

GamesBeat: What does the title refer to? What exactly is the Legacy of the Void?

Morten: It refers to the prophecy of the xel’naga that Zeratul’s trying to find. Over the course of playing the game, you’ll start to understand specifically what that’s about. 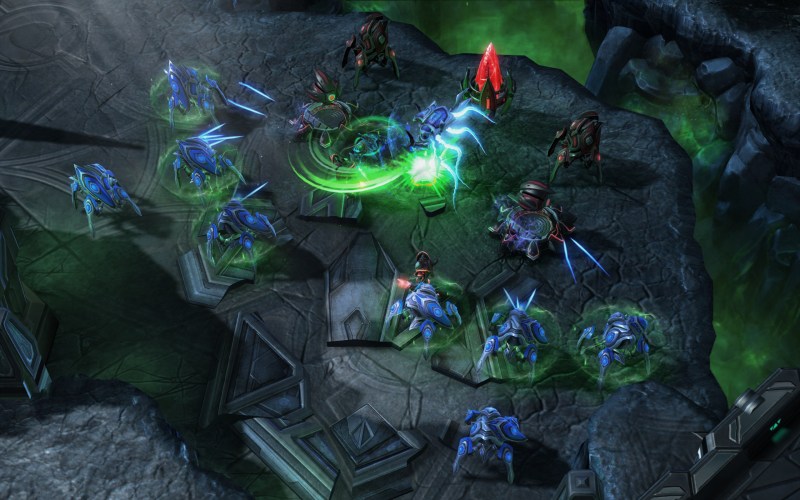 Above: Evil Awakens in prologue for StarCraft II: Legacy of the Void.

GamesBeat: Have you changed the way the Protoss play in any important ways?

Morten: At BlizzCon we showed off a couple of missions from the campaign. The big new mechanic for the Protoss are the powers they get from this ancient arkship called the Spear of Adun. Mid-mission, you can call in strikes from the Spear of Adun on the battlefield. There are a number of variations on the powers, like a pylon for warping. You can choose and invest in what part of the tech tree you want to take advantage of. The designers had a lot of good ideas there.

This is my own subjective, personal take, but just in terms of what that adds to the gameplay, of the three the Spear of Adun mechanic is my favorite. It just feels so powerful. When you play against AI it’s fun to feel really overpowered sometimes.

Rodney Tsing: It definitely makes it feel more Protoss-ey to me, too. It feels like you have this protective ship all the time, whenever you’re going around. It’s a higher technology that lets you call in strikes or use all the other paths you can take. It’s pretty cool.

GamesBeat: How do you craft something that gamers will get emotionally into? Considering that the Protoss are kind of — they’re maybe the least human of any of the protagonists in the series. Even with the Zerg you have Kerrigan to relate to. Now we’re off into something very different.

Morten: Two things, I would say. First, this is still the finale of Kerrigan and Raynor’s story as well. You won’t just see the Protoss. Obviously this is a Protoss campaign, but in terms of the Protoss characters, the writers have woven a great story together. This is the story arc that Chris Metzen set up in the very beginning, about the Protoss retaking their homeworld and reunifying these factions that have been very separate. The story has human threads to it, even if the characters themselves are alien. We have a great writing team and a great cinematics team to create that relatability.

Brophy: Artistically it was difficult because they don’t have mouths. We rely on that a lot when we do characters. Our animators gave them a lot of strong gestures and we created a lot of emotion in the writing. It’s not as hard as we thought it would be, going into this.

Morten: One of the original writing inspirations was Seven Samurai. These guys are a very honorable race. There are themes there that are drawn from other inspirations. 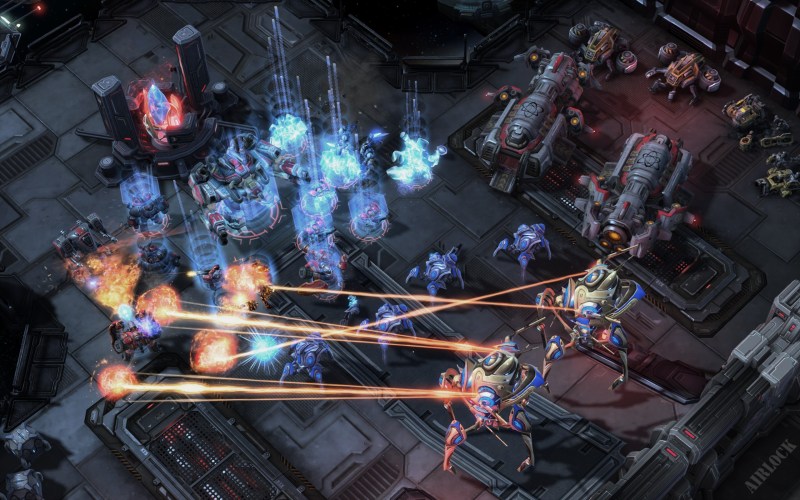 Above: Dark Whispers in prologue for StarCraft II: Legacy of the Void.

GamesBeat: The last game had a lot of side-stories. Is this set up in the same way, or are you going to follow the story straight through?

Morten: You do get to choose which planet you’ll go to next in some cases. Within the missions themselves there are also bonus objectives to go after. There is a bit of self-determination in how you choose to go through the game.

GamesBeat: Is some of that interface the same, all the melding of capabilities?

Morten: The Spear of Adun powers interface is somewhat similar to what you’re thinking of from the Zerg interface, but based around the ship itself. Jesse helped put that screen together.

Brophy: It allows you to go through the different parts of the ship and upgrade it in different ways to support your army.

GamesBeat: What else have you learned from the first two?

Brophy: From the art side, we found we were able to make a lot more general story stuff than we had in the past. We’re adding a lot more to this one in terms of story. We pushed it as far as we could.

Morten: This game will have more than 30 realtime cinematics built by Jesse’s team. Technologically, early on, we just didn’t have the capability for that. There’s a certain amount of technical craftsmanship we learned, but we’ve also learned from all the feedback we get from the community. Because this is a living game — people are constantly playing every game in the StarCraft series — we get a tremendous amount of feedback, and we do try to take that and translate it into material improvements in the game.

Rodney’s just been involved in revamping the chat system, which we’re iterating on as we go through the beta. Every aspect, from the front end to the core mechanics to the art, winds up getting better as a result of that experience and that feedback.

GamesBeat: Are there any big changes to the workings of multiplayer on Battle.net?

Tsing: We recently added a new chat system to the beta, as he said. We’re experimenting with that first version and continuing to do iterations as we get feedback. As an extension of the chat development, we’re also looking at making some other changes to the UI.

Morten: Increasing the number of friends on the friends list is one example. We’re improving the experience in this automated tournaments feature we’re adding. It has visual bracketing for players. We’re bringing so much to this front-end interface to make it a richer experience.