GamesBeat: What’s the decision-making process around new characters? Is it about picking a character and deciding on what abilities and traits work for them, or is more like seeing a gap — oh, we need a Diablo support — and finding a character to fit that role?

Gonzales: It’s actually both. There’s even more factors. If we’ve been staying with the Warcraft universe too much, or — all those factors are considered. We try to avoid redundancy, is the main goal in the design team. They look at what they have and say, how do we make the experience richer by adding something new? Let’s not overlap. Let’s differentiate every time we add something. That’s the main goal right there. You are right, though. When we pick a hero, those guys go into the think tank. How do we make the most immersive experience we can with Skeleton King? The fact that he’s a mad king and all his stuff is unpredictable, is that more important than him summoning skeletons? We’ll have discussions like that. That’s how we ultimately come to a kit like we have there. Skeleton King is crazy. That guys puts me on edge. That’s exactly the experience we want to deliver. 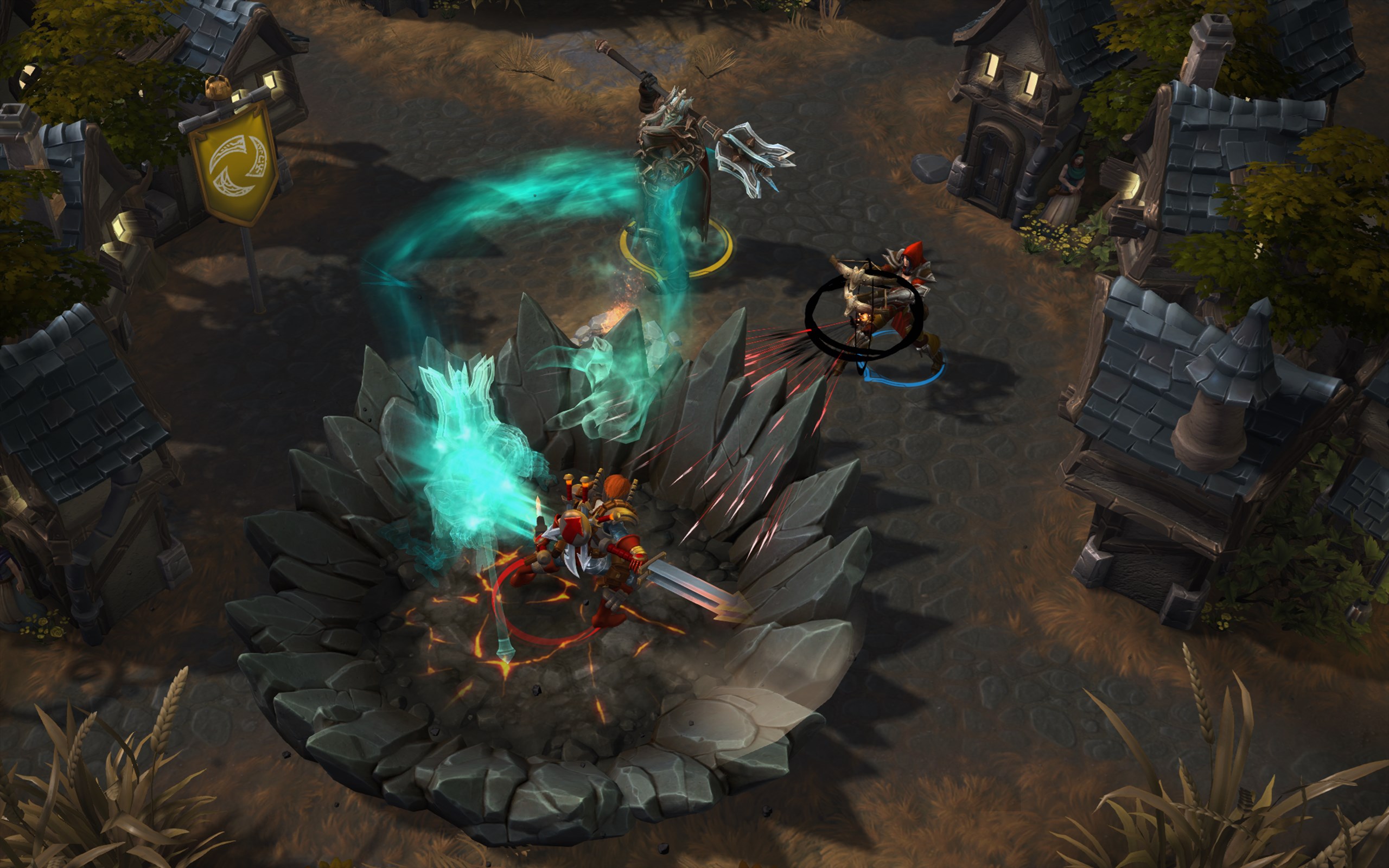 Above: You know someone is powerful when they have a crater around them.

GamesBeat: With some of these new heroes being so creative and different, do you worry at all that some of the original, more vanilla heroes will wind up on the sidelines?

Gonzales: Yes and no. We still hear things like, we want this next hero coming up to be an auto-attack hero. They still want to have enough of those points of entry. We have Rayner. Let’s do another one like that, where there’s a lot of depth if you want to get good at it, but at face value it’s like, I’m just running and gunning. I don’t have to work that hard. I can eat a sandwich and play this hero.

Dabiri: Going forward, while we are pushing the boundaries and making these really creative, interesting heroes, you’re still going to see us trying to do heroes that have varying levels of difficulty, so there are the more accessible and straightforward heroes. But they’re still competitive. You can still play them and win.

GamesBeat: With this and Hearthstone, there’s a big free-to-play movement going on at Blizzard. Did you plan that, or did these two game ideas kind of separately happen around the same time?

Gonzales: It’s more the latter. For the last five years of the development cycle for Heroes, it was always intended, even when it was just a map mod for StarCraft 2, to show the tools we have and what you can do with the game. We were always intending to do a free release. It just became a fact of people were really enjoying the map in its in-progress state. They said, you should keep going, make this bigger, dedicate people permanently to this project. That grew up, but the free-to-play aspect was always present. It was always something we wanted to give to the community. These are our roots. This is where we came from. Enjoy. 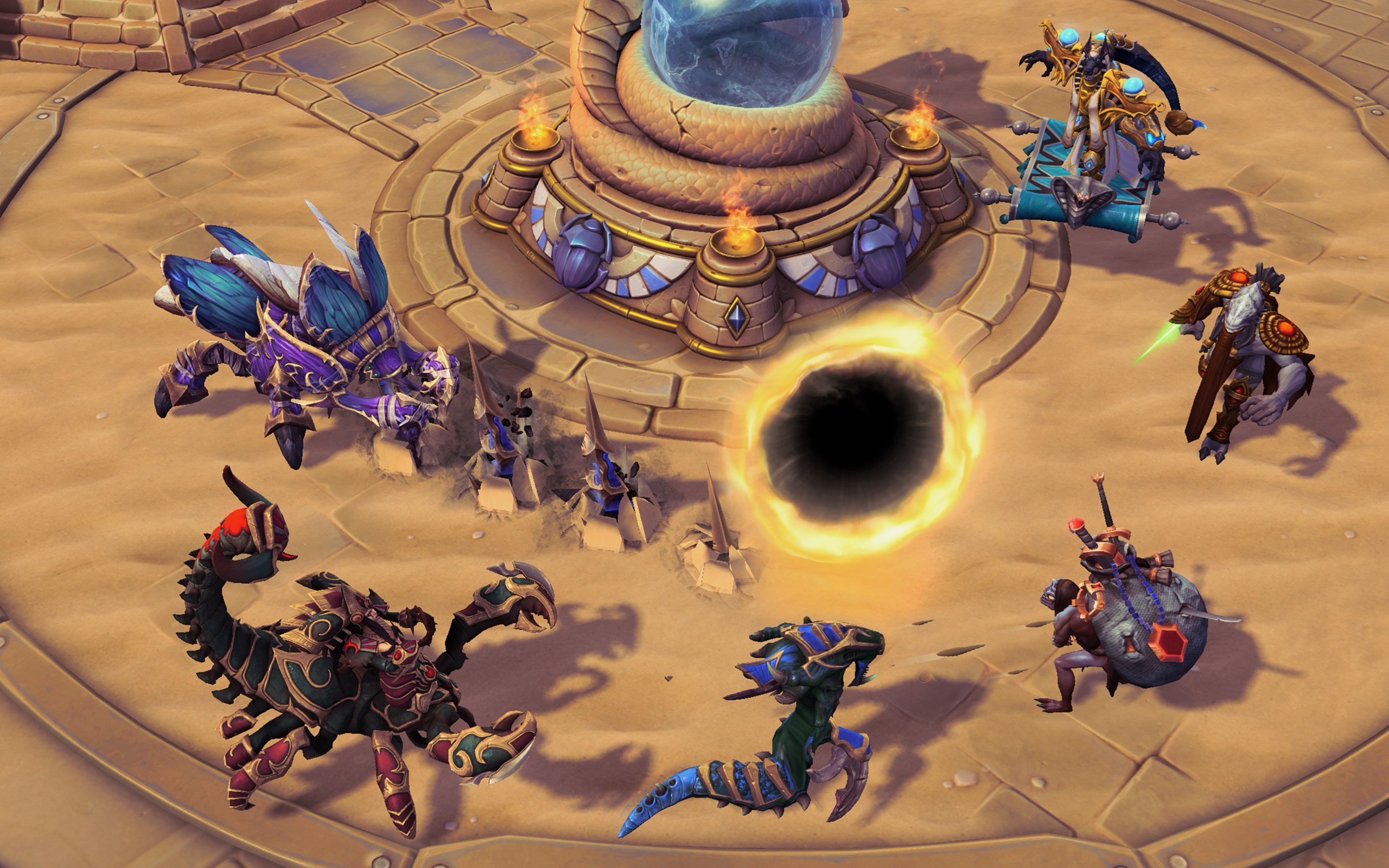 Above: Everybody dance around the portal.

GamesBeat: Are we going to see more crossovers between this and Hearthstone?

Gonzales: Crossovers are going to keep happening, and more often. They’ll probably get obnoxious. Hearthstone is such a huge influence on our design team, too. Those guys are so enthusiastic. There’s a lot of characters they pitch. “That sounds like a Hearthstone character that you’re in love with.” “Yeah, it is.”

GamesBeat: Are most of your players coming in as Blizzard fans playing a MOBA for the first time, or are you getting a lot of DOTA 2 and League of Legends players jumping in.

Dabiri: It’s been interesting. We’ve been looking at some of the data on that recently. It’s a nice mix. It’s surprising. We were never clear exactly — people always asked us early on, who’s your market? Are you going after the League of Legends fans? We’ve always said, look, we’re just trying to make a fun game. Whoever wants to play it, we’re happy to have them play it. It’s worked out that way. It’s not just MOBA players playing it. A lot of people have told us, I never liked these older-style games, but I tried out your game because it was Blizzard and because the characters were familiar, and I love it. It’s a whole new experience. So we’re getting a nice mix of both people who are used to the genre and people who are new to the genre. That’s fantastic.

GamesBeat: I’m not asking for a confirmation here, but would it be silly for us to expect Overwatch characters in here at some point?

Gonzales: No, that’s a completely realistic expectation. What we’ve been saying, though, is that Overwatch definitely needs to have its own time to be recognized and celebrated. We want to let that happen. We’re planning on bringing Overwatch heroes into the fold, but we’re going to let Overwatch have its party, and then we’ll be like, hey, they’re over here too. We have a soft limit of, say, six months before we’ll do anything like that. But we absolutely will be visiting Overwatch and bringing Overwatch into the nexus. Our past games and future games are all viable candidates.