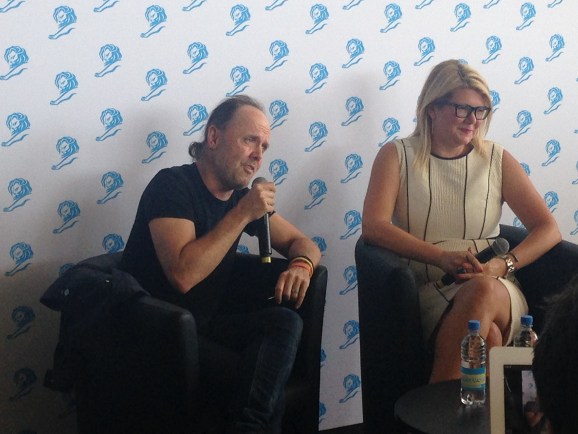 CANNES, France — Apple may be getting kicked in the face by pop singer Taylor Swift, but it’s getting nothing but hugs from heavy metal giant Metallica.

During an interview today at Cannes Lions, the international marketing and advertising conference, Metallica drummer Lars Ulrich said he and his bandmates are excited about the upcoming launch of Apple’s new streaming service, dubbed Apple Music, next week.

Ulrich said the band has been happy with its relationship with Spotify, the leading music streaming service. And he noted that the company has had long-term relationships with Apple executives like Tim Cook and Eddy Cue, as well as music mogul Jimmy Iovine, who is now in charge of Apple Music.

“It’s going to be very exciting,” Ulrich said. “We’ve given them access to everyone we do. I feel very safe with them.”

Apple’s fledgling music streaming service suffered a black eye this week thanks to a timely protest by Swift who was upset Apple wasn’t planning to pay artists during the 3-month free trial period. Apple buckled and reversed course a few hours later.

Ulrich, however, said Metallica has been comfortable with the free streaming services, such as Spotify. These companies argue that the free, ad-supported service helps introduce people to streaming as a first step toward converting them to paying more lucrative monthly subscriptions.

In the case of Metallica, Ulrich said the band wants to be a part of anything that gets its music heard by more people.

“It’s ultimately about getting the music out there,” he said.