Sega’s Creative Assembly has taken the wraps off of Total War: Warhammer, and it is a very impressive real-time strategy game. It brings together the factions of the fantasy universe of Warhammer into an epic battle with huge armies clashing in hand-to-hand combat.

The Total War series is now in its 15th year and it has dedicated fans like me who have played it from the beginning. The studio is working closely with Games Workshop, creators of the well-known Warhammer Fantasy Battle tabletop war game and an accompanying set of miniatures.

The combination will take Total War away from purely historical titles and move it into the realm of fantasy. The battles in this game will include flying suicide bomber goblins (Goblin Doom Divers), legendary heroes, flying creatures, and Empire wizards with devastating spells. That’s going to make survival as an infantry grunt on the battlefield a difficult task.

I caught up with Ian Roxburgh, project lead at Sega’s Creative Assembly studio, at the Electronic Entertainment Expo (E3) in Los Angeles last week. He showed me a demo of the game’s The Battle of Black Fire Pass and did a one-on-one Q&A with me about the title, which is the first in a trilogy.

Total War: Warhammer will come out on the PC, Mac, and SteamOS soon. 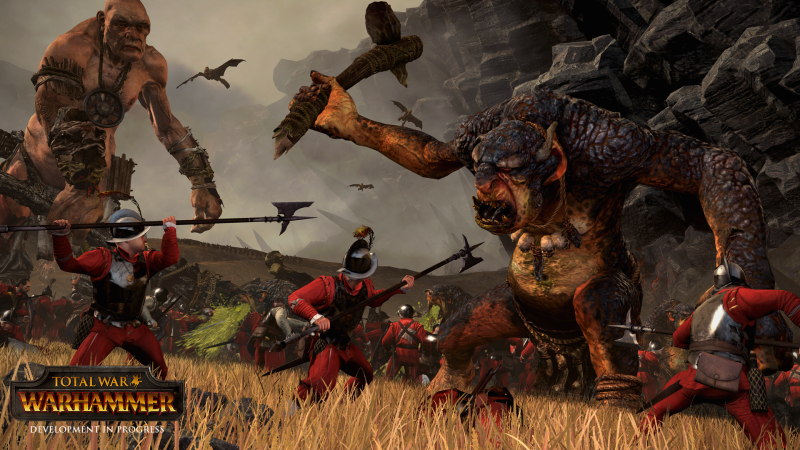 GamesBeat: As a little preamble, I think I put 450 hours or so into Attila. Played the campaign four or five times or so. I might have even won once. I’ve played them since Shogun, most of them.

GamesBeat: I wouldn’t say I’m good at it, but I enjoy it. This one looks a little more refined graphically, compared to the detail in Attila.

Roxburgh: Across the board we’ve been playing around with the engine to accommodate all the different unit types, the way they work mechanically, and the way the combat works as well, to make it more visceral and dynamic. Everything’s a bit more active.

GamesBeat: Is it the same style, where you have the UI for giving orders and the campaign map and all that?

Roxburgh: Right. We have this move into fantasy for the first time, but it’s still very much a Total War game. A turn-based campaign, empire-building, and realtime battles. Everything’s the same except that instead of history, we’re taking this awesome fantasy universe that throws so many cool things into the mix. It gives us some extra toys to play with — tactics, gameplay features, campaign.

We’re looking to use the storyline and narrative that are so rich in the Warhammer universe, all these characters and their stories and backdrops. We’re bringing more of that into the game than in previous Total Wars. We have things like the quest battle system. If you’re playing as Karl Franz and you want to unlock some of his unique magic items, you can get to them on the skills tree and it’ll send you on a quest that might end up at one of these quest battles. It’s a particularly challenging battle, a big scale, and if you win you get the reward at the end.

In the process of getting to that quest battle, we can tell a bit of a story, bring that Warhammer world alive to people, but without doing it in a way that stops it being a sandbox game. The players decide where things go. We don’t want to make it linear because that wouldn’t be Total War anymore.

GamesBeat: Is it the same number of units on the battlefield?

Roxburgh: Yep, 20 units on a side. The way we’ve reworked the engine means that we can have even more numbers on there, though. Per unit we can have more.

GamesBeat: In Attila reinforcements added to how many you could have on the battlefield.

Roxburgh: Right. In Attila you could choose to have two armies and thus 40 units to control at once. We’re going back to 20 again, because we felt like that was too much to control. It didn’t feel right. But again, you can waves of reinforcements coming in. In one of the quest battles you’ll see that the enemies will come in waves as well. You get a much better challenge. Even if you rout one army, there will be more coming in.