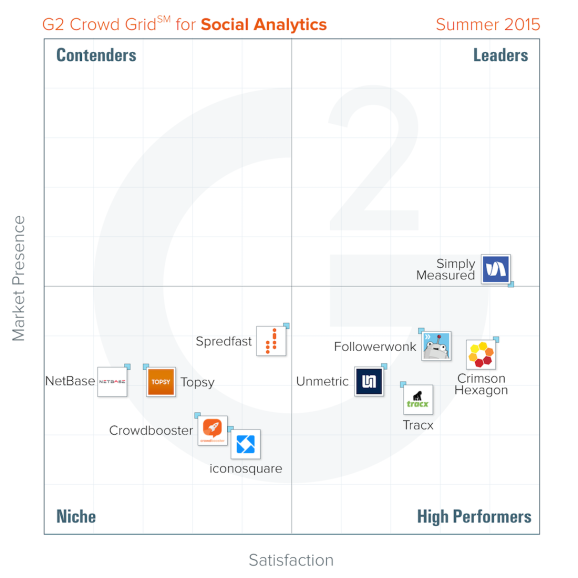 There’s an opening in the market for more all-in-one social media platforms.

That’s a key takeaway in G2 Crowd’s first Grid report on Social Analytics tools, out today. A report last week from Forrester Research sounded a similar theme, but recommended single-point solutions for now because the existing suites have some “inferior tools.”

The new G2 report named Simply Measured as the tool with the highest overall satisfaction, based on submitted user reviews, and it was the only one placing in the Leader category.

The top of four categories shown on the Grid (see top of this page, and here for the live version) is Leaders, which are the products having both the highest satisfaction and the highest market presence, as indicated by vendor size, market share, and social impact.

High Performers score high on user satisfaction but lower than the Leaders category. Crimson Hexagon, Followerwonk, Tracx, and Unmetric landed in that category for this report.

In the Niche category, with the lowest scores in both dimensions, were Iconosquare, Topsy, NetBase, Crowdbooster, and, surprisingly, Spredfast. The latter is a well-known, major social media management tool.

No tools placed as Contenders, with high Market Presence but low Satisfaction.

“While there are some platforms that aim for an all-in-one approach,” content manager Ben Legman told me via email, “many users are still utilizing several best of breed tools for each social media function and/or social network on which they have a presence.”

Until the space matures, he said, users will probably keep trying new tools “to piece together a social media technology stack.”

“Most marketers are enthralled by the promise of social suites,” analyst Nate Elliott wrote. “They hope it’ll be easier to use a single platform than to select, negotiate with, and manage several different vendors.”

“But suites offer little integration and substandard tools,” he said. “Even the best social suites contain as many inferior tools as good ones.”

This G2 report focuses on products used for tracking, measuring, and reporting on social performance. An analytics tool might focus on a single social network like Twitter, or it might provide data analysis across platforms. Some networks provide their own analytics, like Facebook Insights, but G2 noted that third-party tools offer deeper insights on follower demographics, influencer ID, or competitor analysis.

Sixty-five tools are in the analytics category, but for inclusion in the Grid they need at least ten reviews. More than 200 reviews were submitted in total, which G2 said was a typical number.

Better-known social tools, such as Hootsuite, Buffer, Sprout, and Meshfire, are in G2’s Social Media Management and Social Media Monitoring reports, with some in multiple reports.

But several major tools included in the complete set of analytics tools, such as Sprinklr and Socialbakers, didn’t even make it to the Grid. Sprinklr, for instance, was fifth among social media management tools by usage in VB Insight’s report “Social media management: Tools, tactics … and how to win.”

Monitoring tools, a category where G2 places 98 tools, are designed for listening to social networks and responding to comments or inquiries, but they also offer analytics and content analysis. Management tools (104 tools) are intended for publishing, such as teams posting to a number of platforms at once. Marketing automation suites, like Salesforce’s or Adobe’s, also offer social media monitoring, analytics, and measurement tools.