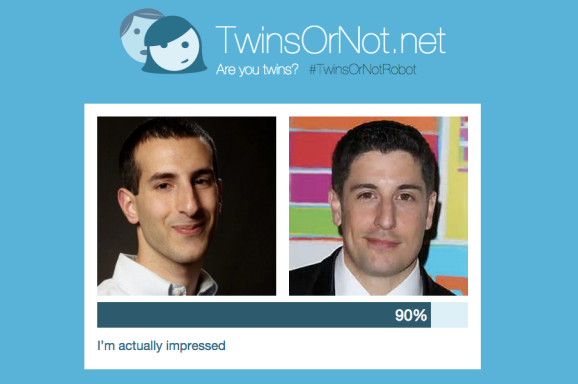 Me vs. Jason Biggs, as judged by Microsoft's TwinsOrNot app. What do you think?

Microsoft is at it again, having fun with face recognition technology. The company has updated its TwinsOrNot app so that you can now find a picture of someone famous with Microsoft’s Bing image search and then compare it to a picture you upload of yourself.

The app then tries to figure out if you and the person in the picture from Bing are twins.

I just gave it a try — and it was amusing.

I uploaded a headshot of myself and then found a picture of Jason Biggs — friends have told me I look a little like him.

“I’m actually impressed,” the app said, below a 90 percent rating for the question, “Are you twins?”

This app, which Microsoft initially introduced a few weeks ago, might not be as provocative as the How Old Do You Look? app that Microsoft showed off at Build in April. But it is an accessible example of the power of Microsoft’s Face API (application programming interface) and the company’s computer-vision savvy in general.

Interestingly, you can permit Microsoft to keep the images you compare in the app. Doing so can help Microsoft improve its computer vision systems further.

“For maximum enjoyment, experiment with a wide range of photos but do remember, this app is for fun and entertainment purposes only,” Microsoft said in a blog post on today’s update.