Samsung is actively disabling Windows Update on at least some of the computers it sells. Microsoft MVP Patrick Barker documented the details on his blog after trying to help Sysnative forum members troubleshoot issues with a Samsung machine.

Samsung describes its update tool as follows: “You can install relevant software for your computer easier and faster using SW Update. The SW Update program helps you install and update your software and driver easily.”

In other words, this is the typical OEM tool that ships with your computer to keep all the manufacturer’s software and drivers updated, as well as any other included third-party software (read: bloatware). As Barker rightly points out, there is one major difference between Samsung’s update tool and that of other OEMs: SW Update disables Windows Update.

Barker found Disable_Windowsupdate.exe is configured to load automatically regardless of how Windows is set to start up. He also found that SW Update downloads the executable in question as part of a zip file from Samsung’s website and that its digital certificate is signed by Samsung. We downloaded and installed the zip file to verify that this is indeed the case: 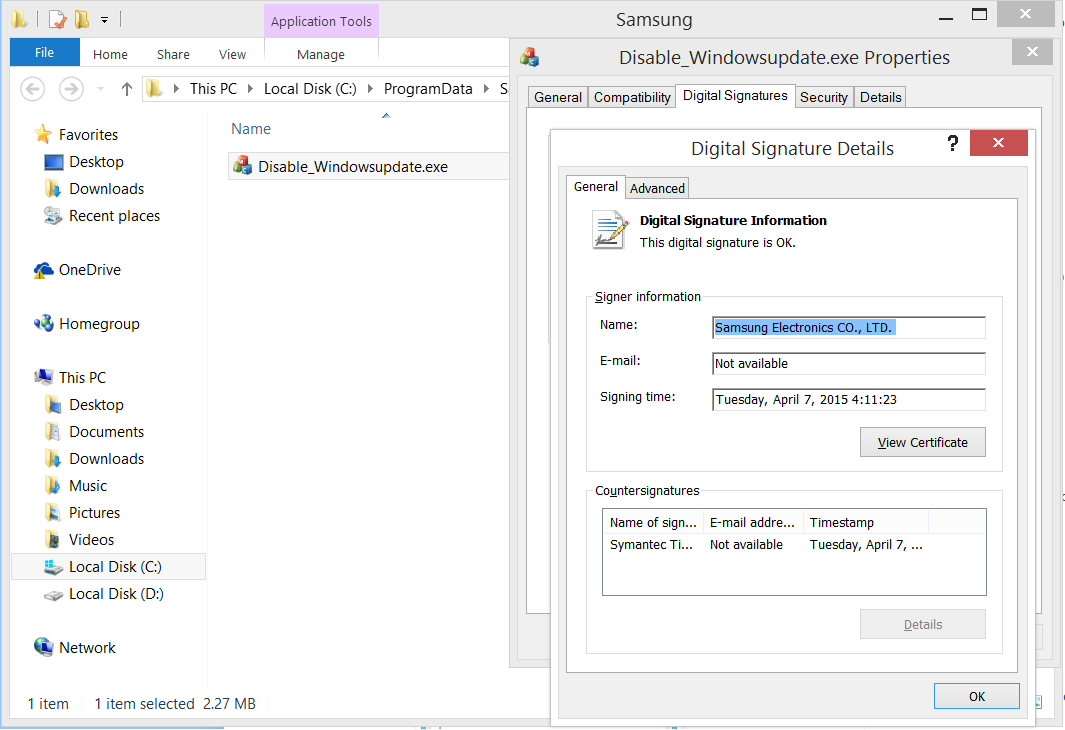 As far as we can tell, the installer is made to work with computers running Windows XP and higher, and across various language settings. It’s not clear on how many Samsung computers SW Update has downloaded and activated Disable_Windowsupdate.exe (it doesn’t ship with Samsung PCs out of the box). That said, users have been complaining about this issue since at least April and reports go as far back as October, so Samsung doesn’t appear to be in a rush to address it.

Windows Update is responsible for more than just updates to the operating system, software, drivers, and so on. Most importantly of all, it handles all security updates.

Let’s put this another way: Various forms of malware disable Windows Update any chance they get. This is a serious problem that Samsung needs to address immediately on all affected computers.

Barker got in touch with Samsung’s support team and received the following explanation:

When you enable Windows updates, it will install the Default Drivers for all the hardware no laptop which may or may not work. For example if there is USB 3.0 on laptop, the ports may not work with the installation of updates. So to prevent this, SW Update tool will prevent the Windows updates.

In other words, Samsung either noticed that Windows Update was overwriting drivers on some of its computers or decided to preemptively stop something like that from happening. The solution the company came up with to “fix” the problem was to, apparently, disable all Windows updates.

Inhibiting Windows Update from doing its job is obviously the wrong way to go about ensuring your Windows machines function as intended. Samsung should be working with Microsoft, not against it, to make sure drivers in Windows Update are not apparently breaking the functionality of its computers.

We have contacted Microsoft and Samsung about this issue and will update you if we learn more.

Update on June 24 at 2:10 PM PST: Samsung has still not commented on this story. Microsoft has, however, voiced its displeasure and said it is talking to Samsung.

“Windows Update remains a critical component of our security commitment to our customers,” a Microsoft spokesperson told VentureBeat. “We do not recommend disabling or modifying Windows Update in any way as this could expose a customer to increased security risks. We are in contact with Samsung to address this issue.”

Update on June 24 at 2:55 PM PST: Samsung has confirmed it is investigating. “We are aware of Mr. Barker’s claim regarding Windows 8.1 updates on our computers,” a Samsung spokesperson told VentureBeat. “We take security concerns very seriously and we are working with Microsoft to address this matter.”

Update on June 24 at 7:20PM PST: Samsung has updated its statement. The company is trying to deny the claims in a very roundabout way.

“It is not true that we are blocking a Windows 8.1 operating system update on our computers,” a Samsung spokesperson told VentureBeat. “As part of our commitment to consumer satisfaction, we are providing our users with the option to choose if and when they want to update the Windows software on their products. We take product security very seriously and we encourage any Samsung customer with product questions or concerns to contact us directly at 1-800-SAMSUNG.”

The problem with this statement is that the issue was never over “blocking a Windows 8.1 operating system update.” It was over disabling Windows Update, which is not mentioned in the statement at all. We have asked Samsung to clarify its stance.

Update on June 26: Samsung will patch its software to stop disabling Windows Update ‘within a few days’