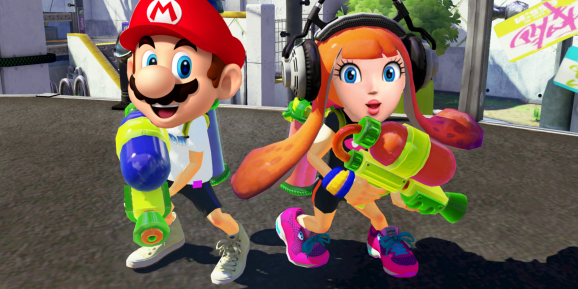 Nintendo nearly made Splatoon into a Mario game.

Splatoon has sold 1 million copies worldwide in its first month of release.

Nintendo’s innovative third-person splat-em-up has performed strongly in its first month, with around one in every ten Wii U owners picking up a copy. It’s often tough for new intellectual properties (IPs) to make a sales impact, but Splatoon’s first month shows that Wii U owners — currently numbering around 9.54 million based on Nintendo’s own sales figures — are clearly interested in new gameplay experiences, regardless of whether they feature established characters. Interestingly, Nintendo debated making Mario the star of Splatoon before deciding to make it a new IP instead, and that decision seems to have paid off.

Splatoon’s attach rate of around 10 percent may be further helped by Nintendo’s decision to drip-feed extra free content into the game over time, including new maps and weapons. Any shooter needs a strong community to help it grow, and keeping players engaged over time is the best way to establish such a community.

The United States has dominated Splatoon sales with 476,000 digital and physical copies sold, according to Nintendo’s own internal sales figures. Nintendo also sold 230,000 copies of the game in Europe, 368,000 in Japan, and 20,000 in Australia.

Passing the million mark so quickly means that Splatoon looks likely to match the 1.54 million sales of The Legend of Zelda: The Wind Waker HD. It still has a way to go to catch top-selling Wii U games like Mario Kart 8 and New Super Mario Bros. U, though, which have attach rates of around 50 percent.