LOS ANGELES — Animal Crossing is beginning to branch out.

Every entry in Nintendo’s life-sim series has been pretty similar to this point. You move into a new town, you make friends, you fish, upgrade your house, and just kind of hang around. However, two upcoming games are starting to play around with these conventions. Happy Home Designer for 3DS focuses on building houses, and Amiibo Festival for Wii U is a multiplayer digital board game.

At last week’s Electronic Entertainment Expo in Los Angeles, I got to talk to Animal Crossing director Aya Kyogoku about the series’ new direction and how these two games came to be.

GamesBeat: Why make an Animal Crossing that hones in on this one specific aspect of the game [series]?

Aya Kyogoku: In Animal Crossing, home creation and home decoration was an aspect of the game that a lot of people enjoyed. But that’s only one part of living out your life in Animal Crossing. When we were developing Animal Crossing, we had to come up with ideas for houses that the animals have when they first move in to your town. They have a set of furniture and decorations they use. That was very fun for us as developers. We had to think about, what kind of things would this animal like? What kind of life do they lead? Trying to figure out what they’d want was very fun, and we tried to think of a way we could get this kind of experience to players as well. That’s where the origins of this home-designing concept came from.

GamesBeat: Is it still a simulation game like Animal Crossing, an experience that just goes on and on, or is there more of a win state, a point where you’ve built the perfect home?

Kyogoku: This is more of a simulation that’s focused on house design or house creation. When you get a request — it might seem initially that you get a request from an animal, they give you a certain theme, you create a home based on that theme, you get a good evaluation, and that’s the goal. But actually, the theme is just a guideline. The fun starts when you can expand on that theme using your own originality and creativity. In that sense I think the sense of freedom that you experience in Animal Crossing is still very present in Happy Home Designer. Above: The happiest home.

GamesBeat: In the regular Animal Crossing games, you have to buy a lot of the furniture and things that you would put in a house. Do you still have to go to the store and buy those things, or is all that more available in the beginning now that you’re a designer?

Kyogoku: Yes, that’s correct. It’s all available to you.

GamesBeat: Are there any items you can unlock later in the game?

Kyogoku: Not every single furniture will be available in the beginning. Obviously, as you know, Animal Crossing has lots and lots of furniture. Having it all available might be too overwhelming at first. As you take on different requests, furniture that fits that request or theme will become available. We’ve designed it so that they become progressively available at a good pace. It won’t overwhelm you, but it’ll give you enough choices. GamesBeat: Is there a budget with each house project that you have to work with, or can you go crazy and build a huge mansion for every animal?

Kyogoku: No, we got rid of the idea of a budget. Whether to include one or not was something that we thought hard about and discussed amongst the development team. What we wanted to get out of this game was for the player to reflect their creativity in the game. We didn’t want any constraints from budgeting to be an issue. In real life, depending on the budget you had, you might have to give up on some things you wanted to see. We didn’t want that to happen in the game world as well.

GamesBeat: Are you able to customize your own character, your avatar, like in other Animal Crossing games, or is that less intensive because most of the focus is on the homes?

Kyogoku: You can definitely customize the player character, as you were able to in New Leaf. You can change the face, the hair. You can make him look exactly like your character in New Leaf. You’ll work for Nook’s Homes. Because Nook’s Homes has a dress code, you’re always in uniform while you’re working. However, in Happy Home Designer, you don’t just make the houses. You can go visit any of the houses you’ve made and take a peek into the animals’ lives. Not only can you just visit, but you can use Amiibo cards to invite other animals. For example, an animal might say, I want a room that’s like a concert hall. I want to hold concerts there. Or they’d want a room that’s really made for birthday parties, because they want to have birthday parties there. So you create the room and you can decide whose birthday party it’s going to be. Who should they invite to the party? Once you have all the animals there, you can join in. Maybe you’ll dress your character up and put a party hat on and enjoy the scenery. Above: A library of options lets you customize everything.

GamesBeat: Is that the Amiibo support? You use the Animal Crossing Amiibos, and those characters will show up in your homes?

Kyogoku: That’s one of the functions of Amiibo, to be able to invite animals and create this scene where you can take a picture of a birthday party or a concert that’s going on. That’s one big aspect of the Amiibo function. To be sure, Happy Home Designer can be played without any Amiibo cards. The animals will hang around in front of Nook’s Homes thinking, oh, I want a house like this. You’ll talk to them and take on their requests and build their houses. But with the cards, you can reach out to animals in particular. You’ll be making a call and saying, hey, would you be interested in building a house with us? For a lot of Animal Crossing fans, it’ll be great to be able to reach out to their favorite animal at will and come to build a house for them. That’s one feature. The second feature is, in the Animal Crossing series, there are two general types of animals. The ones that move into your town, they become residents, they become your neighbor, you develop a relationship with them. Then there are characters like Tom Nook or K.K. Slider who serve a special role in the game, but don’t necessarily live in your town. Using Amiibo cards you’re able to build a house for them as well, which is something new.

GamesBeat: You can build a house for K.K. Slider, and he’ll go throw concerts for you?

GamesBeat: It seems like with this game and Amiibo Festival on Wii U, Nintendo is branching out [with] the Animal Crossing franchise. It used to be only one thing, but now we’re seeing all these new ideas. Is that a conscious move to expand Animal Crossing? 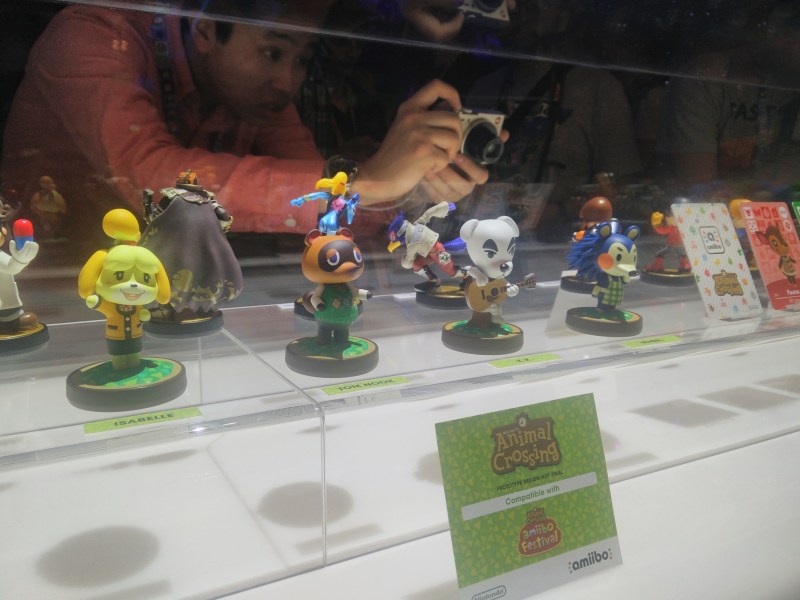 Above: Nintendo is bringing gamers most of the popular characters from the latest 3DS Animal Crossing, New Leaf.

GamesBeat: What will be next for the series? Another spin-off, or a full-blown Animal Crossing?

Kyogoku: Obviously, as you said, we’re in full development for Happy Home Designer and Amiibo Festival. We’ve been focusing on that. When we think about Animal Crossing, including the main Animal Crossing series, as a development team we’re always thinking about what to do for the next installment. Whether that’ll be a cutout and an expansion of a certain feature or a full-blown Animal Crossing game, that hasn’t been decided yet, but as a team we’re constantly thinking about what we can do for the series in the future.

GamesBeat: Now I just have to ask because I’m a big Smash Bros. fan. I was wondering how you feel about seeing the Animal Crossing villager punching Mario.

Kyogoku: Naturally, things like that wouldn’t happen in the world of Animal Crossing. But at the same time, Smash Bros. has its own set of rules. In that sense a lot of people have enjoyed it. Along that same line, there was an Animal Crossing course added to Mario Kart 8. The world view and the feel of Animal Crossing was really well-reflected in that course. You see Isabel speeding around on a bike, which you don’t usually see, but it’s still enjoyable. For myself and the fans, I hope we’re able to see these animals not just limited to the world of Animal Crossing, but in other series as well. Seeing that happen makes me happy.