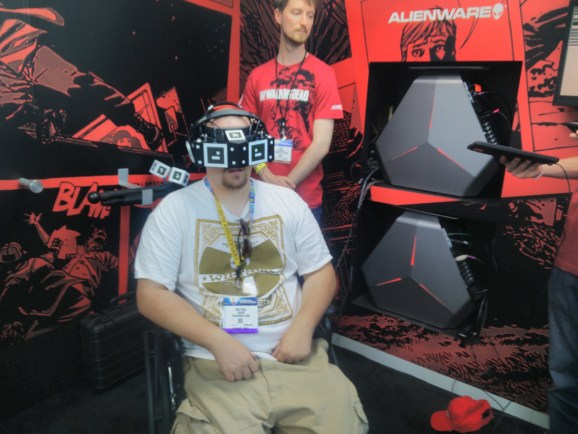 The man in the back wants to touch you.

I’ve found out something about myself: I’ll sign just about anything at E3 as long as it means I’ll get to do some virtual reality stuff!

That’s what happened when I went to the Starbreeze booth to try out its StarVR head-mounted display and developer Overkill’s The Walking Dead. One of Starbreeze’s people handed me a tablet and told me to sign, and I did … without reading what it was I was signing. I figured it was probably something about how I couldn’t sue them if I had a heart attack from the megareal VR. It turns out that I actually was giving a bunch of grown men permission to touch me.

The StarVR Walking Dead experience puts players in a wheelchair, and then Starbreeze developers shake it and hand you stuff to fully immerse you in the experience. But, by the end of the demo, you’re left helpless with no ammo and no way to escape. You just have to let the zombies eat you.

And that’s when it happened.

Just as the pair of zombies jumped to take a bite out of my neck and legs, one of the Starbreeze people grabbed my thigh. I might’ve jumped … maybe a little bit of pee came out. I don’t think you should judge me!

But it that definitely made for a frightening experience, and I’m really glad I agreed to let those people at E3 touch me.

And I don’t think I’ll ever say that again.