Everyone who drives can have an informed opinion about a new parking app. But few people know much about whether a new cancer drug is a good idea.

So, you would think that due diligence tools would be central to any investment crowdfunding platform. But angel platform Propel(x) says its new online Diligence Insights feature, announced today, is the first of its kind.

It allows angel investors to ask questions of the management or customers/would-be customers of a startup looking for money, or of experts in the field. Video conference calls between the startup and investors can be scheduled, and investors can submit market size estimates or lists of competitors, which the platform will curate.

Before, investors’ questions were handled offline, a cumbersome process that Propel(x) CEO and cofounder Swati Chaturvedi told me is common among investor platforms.

Now, a startup can agree to this kind of due diligence, or not. If it does, it can nix any of the proposed experts, who are suggested by investors or Propel(x).

The reason: Competitors could be posing as investors, and then using their “experts” to discredit the startup. 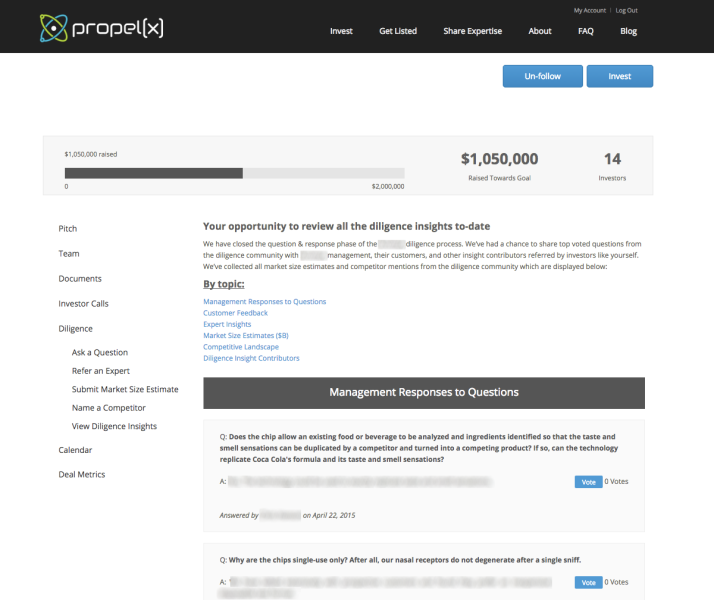 The community votes on the top 20 questions in each category for a startup, and the answers are available to anyone on the platform, which launched early last year.

Five startups have been through this online due diligence since the beta began a little more than a month ago. Chaturvedi recalled that one investor said he’d double his $25,000 investment in a startup if the due diligence panned out. He ended up standing pat.

Investors, who are supposed to have high net worth, are verified through LinkedIn and other professional profiles, although those can obviously be faked. Net worth is not actually confirmed, but asserted by the investors.

Although it would seem competitors can readily fake their way onto the platform, Chaturvedi noted that this is actually better than many in-person angel groups, where competitors can always be lurking.

No other investor crowdfunding platform offers a similar online due diligence from experts or customers, she said, although some allow a discussion forum-like engagement between investors and the startup. But she suggested investors use this “as the starting point or the ending point” for their own, offline diligence, not as the only means.

The San Francisco-based Propel(x) specializes in “deep technology” companies, which are often based on a scientific discovery. Its main fields are life sciences, clean energy, computer science, materials, and chemicals.

The complexity and lack of due diligence is why deep technology startups don’t find much traction on investor crowdfunding platforms, she said, even though nearly a third of angel investment dollars in the U.S. find their way to such companies.

Chaturvedi added that investors on crowdfunding platforms often guide their decisions by what a prominent participating investor might be doing. This kind of diligence-less “follow the leader” investing, she said, gave us the 1929 Wall Street crash and Bernie Madoff.

She noted that the U.S. Securities and Exchange Commission, which is still getting up to speed with the crowdfunding movement, does not require due diligence, so it’s buyer beware.