While the Electronic Entertainment Expo tradeshow is about showing off new games and technologies, Rare chose to mostly focus on the past by celebrating its 30th anniversary with Rare Replay.

Coming out on Aug. 4 for $30, Rare Replay collects 30 games that span the studio’s three-decade history — going as far back as 1983 with Jetpac, and as recent as 2008 with Banjo-Kazooie: Nuts & Bolts. You can play each title in their original, untouched state, or quickly jump into a set of custom challenges that remix certain parts of the game in Snapshot mode.

Games that Rare considers “really retro” because they don’t have save filing systems (like the notoriously difficult 1991 sidescroller Battletoads) have a nifty new feature that allows you to rewind the last 10 seconds of gameplay. For games from the Xbox 360 era, Rare is using the same tech behind the Xbox One’s upcoming backward compatibility feature.

I saw Rare Replay in action during a hands-on demo with Rare studio head Craig Duncan at E3. One thing I didn’t expect was how tongue-and-cheek the collection would be: It looks like a cheesy carnival show. It even has a fun song-and-dance sequence with cardboard cutouts of Rare’s characters. 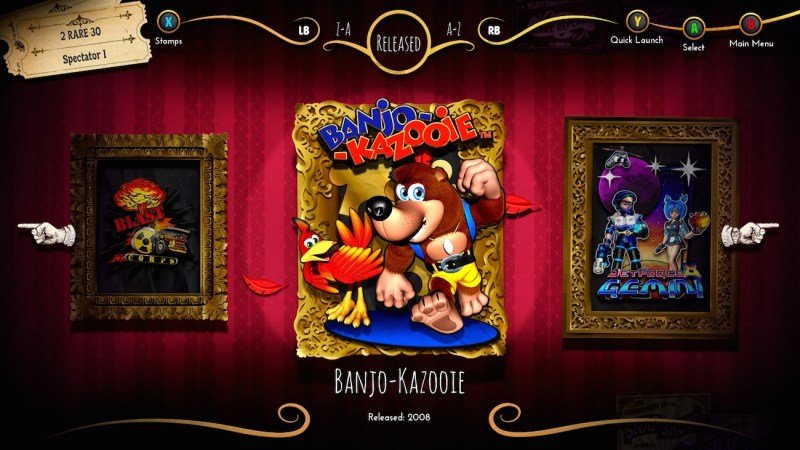 Above: You can flip through Rare’s catalogue in gallery mode.

Like other companies’ game collections before it, Rare Replay is also a convenient way of circumventing the industry’s preservation problem. It’s hard to play older games if you don’t have the hardware they were originally designed for.

“I think as an industry, we don’t do a great job of preserving history. I can read a book from a hundred years ago or watch a film that was made 20 years ago or listen to a music track that’s 40 years old,” said Duncan. “Because in gaming, when we make new systems, we kind of lose catalogues of games. So again, [we did Rare Replay] just to paint Rare’s history from [the company’s] origin right through to current day in one collection.”

Founded in 1985, Rare rose to prominence as a premiere second-party Nintendo developer with hits like Banjo-Kazooie and Perfect Dark. After Microsoft purchased the company in 2002, the studio worked on Xbox Live Avatars, various sports games for the Kinect motion-sensor, and new games like Viva Piñata. Rare Replay charts that journey with unlockable video interviews with current and ex-Rare employees, as well as a look at never-before-seen prototypes, including the unreleased Kameo 2.

“It’s a common myth that everyone who was at Rare had left Rare. … Like any studio, we’ve had staff come and join the company and leave the company,” said Duncan when I asked him if any Rare developers from the 80s and 90s are still working there today.

“I’ve presented five 25-year service awards to developers at Rare since I’ve been running the studio for the last four years. We’ve got probably a third of our team who have over 15 years of service. And we’ve probably got a third that are [between] 15 [years] to two to three-year service. And probably about a third we’ve hired in the last couple years.” 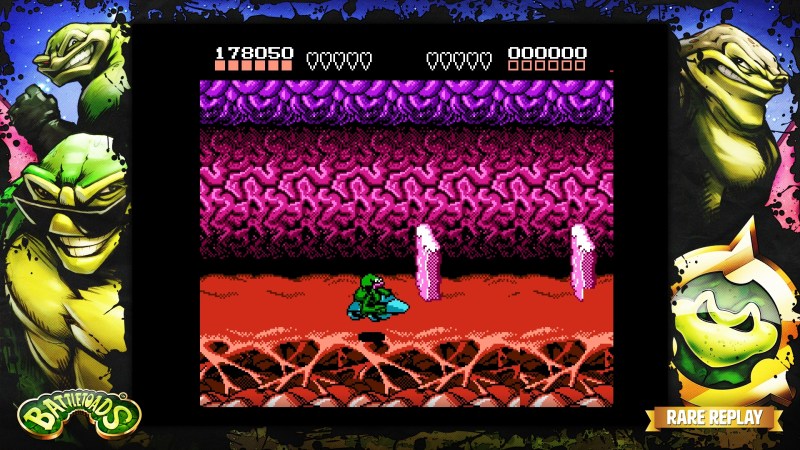 Above: Rare Replay has the original Battletoads (above) and the three-player Battletoads Arcade. The latter has never been released on consoles before.

Rare wanted to use this year’s E3 as a way to not only show where it has been, but also where it’s going. During Microsoft’s press briefing, it announced Sea of Thieves, a pirate-themed action adventure game.

“What I love about [our E3 news] was that it was this great one-two punch for the studio: ‘Here’s our legacy and here’s everything that Rare has done that shaped gaming. And here’s a brand new [intellectual property] that ultimately — and we’re not talking too much about Sea of Thieves — is Rare’s opportunity to redefine another genre,’” said Duncan.

Gamers are clearly excited for Rare Replay. It has the most preorders on Amazon U.K. among games announced at E3.