Social-sharing and scheduling tool Buffer has published its research into a major social media study that analyzes almost five million tweets to identify when the best time to tweet is.

The San Francisco-based company has built a solid reputation for its social sharing tool, letting users schedule posts easily. Download the Buffer mobile app or browser extension, connect it to your social media accounts, including Twitter, and you can “Buffer” posts to publish at pre-set intervals such as “every half-an-hour” or a variant of your choosing.

Buffer has a lot of data at its disposal and, as such, has delved back almost five years to garner a bigger picture of when the optimal time is to send a tweet.

“I believe this really shares a very detailed look at the state of what is the right time to publish on Twitter and can hopefully help a lot of people trying to improve their Twitter efforts,” Buffer cofounder and COO Leo Widrich tells VentureBeat. “Since social media is so young, it’s been pretty hard to get meaningful data by observing what has happened over time, and we feel we’ve got the first data set that really shows that.”

For the study, Buffer’s data team analyzed around 4.8 million tweets from 10,000 profiles, looking at the combination of clicks, timing, and engagement throughout the day across different time-zones. The main figures it looked at were: clicks-per-tweet, favorites-per-tweet, retweets-per-tweet, and replies-per-tweet.

So, what do the results say?

Well, according to Buffer’s numbers, (very) early mornings are generally the best time to garner clicks. However, the report adds: “In some cases, the most popular times to post are opposite of the best times to post.”

Indeed, the most popular time to tweet was between noon and 1 p.m., while the fewest tweets are sent between 3 a.m. and 4 a.m. 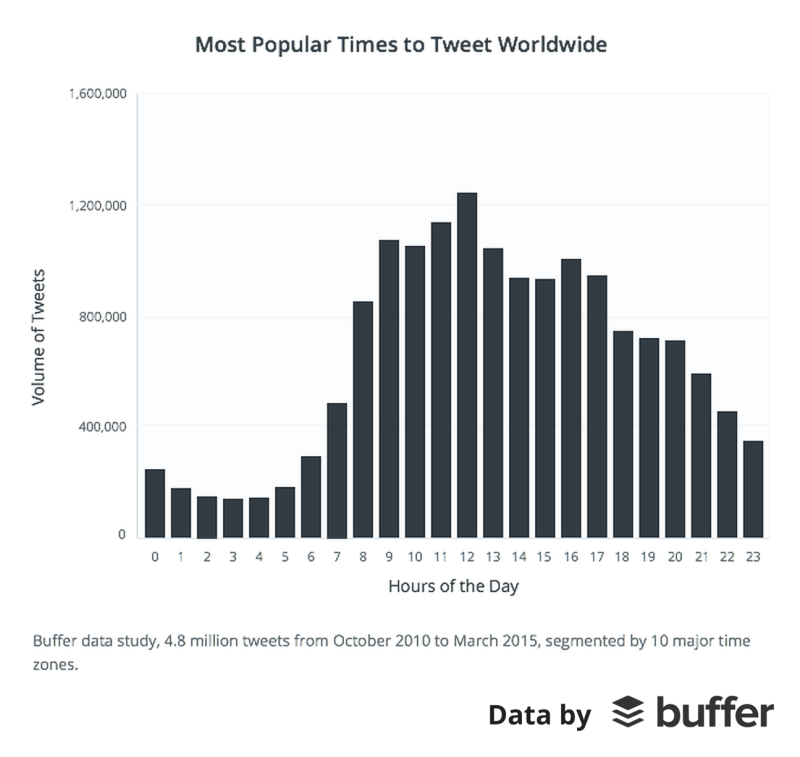 While midday is roughly the most popular time to tweet, according to Buffer’s data the best time to actually get more clicks is between 2 a.m. and 3 a.m. And the clicks-per-tweets ratio falls between 9 a.m. and 1 p.m. That could be because it’s peak tweeting time and timelines are saturated. 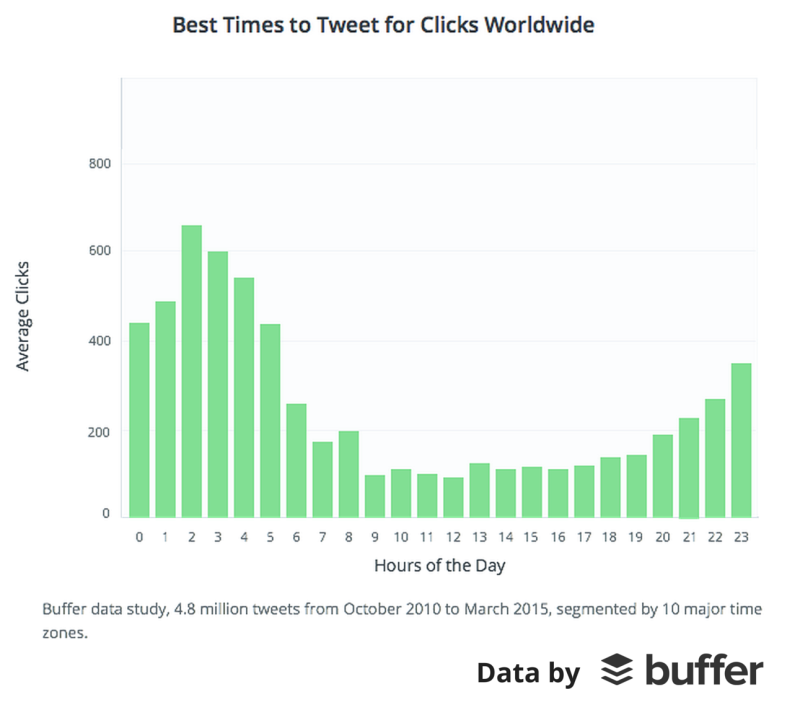 It’s worth pointing out the elephant in the room here too — these numbers are averages. Click-per-tweet ratios will depend on a number of factors, including who follows you, and where they are in the world. What’s “off-peak” for you may well be “peak” for your audience, and vice versa.

Engagement isn’t all about clicks either — retweets, favorites, and replies are just as vital a metric. According to Buffer, tweets sent between 2 a.m. and 3 a.m., again, garnered the most engagement, though between 11 p.m. and 5 a.m. generally ranks highly for audience interaction. And, perhaps unsurprisingly, least engagement happens during “traditional” office working hours of 9 a.m. and 5 p.m.

The Buffer study goes into a bit more detail on this, including regional variances around the world, and is well worth a read.

“What has surprised us the most, and what we really wanted to accomplish with this data, is to look at timing across different time zones,” explained Widrich. “Oftentimes, studies struggle to fit that in, and it’s usually hard for readers to understand which data performs best in their own country or time zone. By breaking it down further and having data available by continent and different engagement metrics, we hope to give a much more detailed view for our audience.”

While some of the stats in the report seem fairly intuitive — lunch time is popular for tweeting, and bedtime isn’t — it’s interesting to see hard numbers that illustrate that the best time to tweet for clicks and engagement is often the exact opposite of when most people are tweeting.

– What 4.8 Million Tweets Say About the Best Time to Tweet [Buffer]