If the Electronic Entertainment Expo trade show and the 22 virtual-reality-related companies in attendance did anything last week, they established that virtual reality is about to go big. And at least one of those competitors used that event to announce its entrance into the head-mounted-display battle.

StarVR is the newest high-end head-mounted VR display asking for your attention. It’s from the indie developer-turned-publisher Starbreeze, which is responsible for Payday 2 and The Chronicles of Riddick: Escape from Butcher Bay. The company acquired the VR startup InfinitEye, which has worked on the hardware since 2011, and it has renamed the company Starbreeze Paris.

Now, the company will push ahead into a market that many are ready to hand over to Facebook’s Oculus VR or Valve. But Starbreeze is ready for that fight.

“This news is crazy because there are already a few contenders out there, and they are big ones,” Starbreeze product manager Almir Listo told GamesBeat in an interview. “They are big fish. For us, being an independent game developer — having made games since 1998 — to go into a market with these guys, that’s a big bet. Let’s hope we know what we’re doing.”

That might make is sound like Starbreeze is unsure about whether or not it has a chance, but Listo was smiling while he said all of that. And he immediately told me that everyone within the company is confident.

But how can anyone expect to go up the established leaders in the space? Well, for one, it’s still very early. The Steam VR-powered HTC Vive won’t debut until later this year, and Sony’s Morpheus and the Oculus Rift aren’t due out until early 2016. Starbreeze thinks that means the market is far from settled.

“No one knows where this is going to end,” said Listo. “And we know what we’re capable of. We’ve made triple-A games for the longest time. We’ve been in the industry for quite some time and not too long ago, when we started working on our own IP, we also launched ourselves as a publisher. What we realized is that we’ve got this. We have the talent. We have the muscle. We can deliver.”

Starbreeze showed up in a big way at E3. It set up its massive booth between the South and West Halls of the Los Angeles Convention Center, and it enabled people to try on StarVR. I did the demo with developer Overkill’s The Walking Dead. It was a four-minute on-rails shooter, but it gave me a good idea of the strengths and weaknesses of the hardware.

I’ll say this: StarVR definitely does have the best field-of-view. It also has the best resolution screen I’ve seen in a VR head-mounted display so far. Where Oculus Rift and Vive both felt like I was looking through a screen door, that sensation is absent from Starbreeze’s visor. 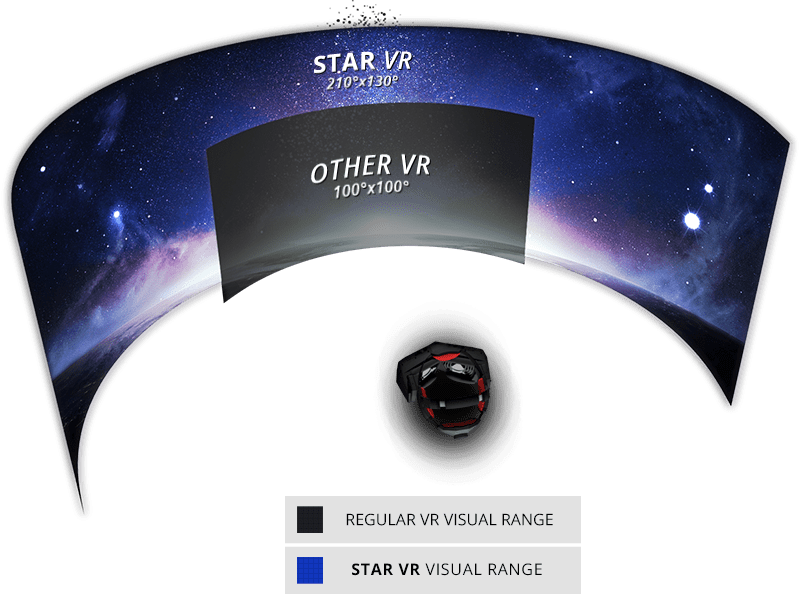 Above: This should give you an idea of how much more you see in StarVR — although I won’t say it was fundamentally better than HTC Vive.

But that doesn’t mean everything was better in StarVR. The headset’s optics — the lenses that go between your eyes and the screen — never ever felt right. My vision always felt off, and I came out of the short demo with my eyes out of focus. They remained that way for about five minutes.

Starbreeze is aware that it has a ways to go.

“We’re still in a prototype phase,” said Listo. “We haven’t announced any dates or price. It needs time, and we’re going to take our time because we want to deliver the best experience that you can possibly find.”

But making hardware isn’t just about nailing down a product. Starbreeze — traditionally a software company — will also have to manufacture something that is plastic and takes up space in a warehouse. But Listo says the company already has much of the knowledge required to make that part of the process function. 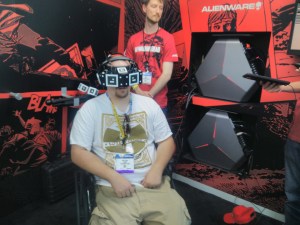 Above: The man in the back wants to touch you.

“With us being publishers now, we know how the backend works,” he said. “We know how the whole loop works. We know exactly what we need to do and what we shouldn’t do.”

And while Starbreeze Paris gets the hardware in order, the rest of the company is making games.

On working with Valve and more

The virtual-reality space is interesting because companies like Oculus and Valve have already made a lot of their discoveries open to everyone. But we asked Starbreeze if it was using any tech from the Steam company, and it said no.

“We have our own solutions for the tech that we do,” said Listo. “Of course, there are other things that we can try out, but we haven’t announced anything like that yet.”

But the company, which has published several games on Steam, made it clear that it’s close with its VR competitor.

“We’re very good friends with Valve,” said Listo. “We’re going to make sure that StarVR is going to be compatible with whatever Valve is going to do. Steam is one of the best platforms out there. We love Valve’s headset. We love what they’re doing. And we’re a big supporter of the open VR they’re pushing. We fully support that thinking.”

Finally, with Vive and other major consumer VR devices going out starting later this year, we asked Listo what he expected when it came to StarVR.

“At this point, we don’t expect anything,” he said. “We just want people to try this out.”