Hitbox has some huge competition to challenge as a rival to Amazon’s Twitch gameplay livestreaming service and Google YouTube gaming videos. But Martin Klimscha, chief executive of Hitbox, isn’t concerned about that.

He is moving forward with a game livestreaming service that offers a resolution of 4K and a speed of 60 frames per second for later this year. That’s a lot more detail and a lot faster than the standard 1080p livestreams of rivals.

“They’re like Coke and Pepsi,” he said in an interview with GamesBeat at last week’s Electronic Entertainment Expo (E3), the big gaming trade show in Los Angeles. “They’re both huge. We’re Red Bull. We’re pushing forward for what gamers need.”

Hitbox believes this is a new way for livestreamers to stand out from the pack of millions doing the same thing. But it’s just what Hitbox needs to make a difference. Right now, it has 6 million monthly active users, while Twitch has well over 100 million. So yes, it’s time for Klimscha to be scrappy. 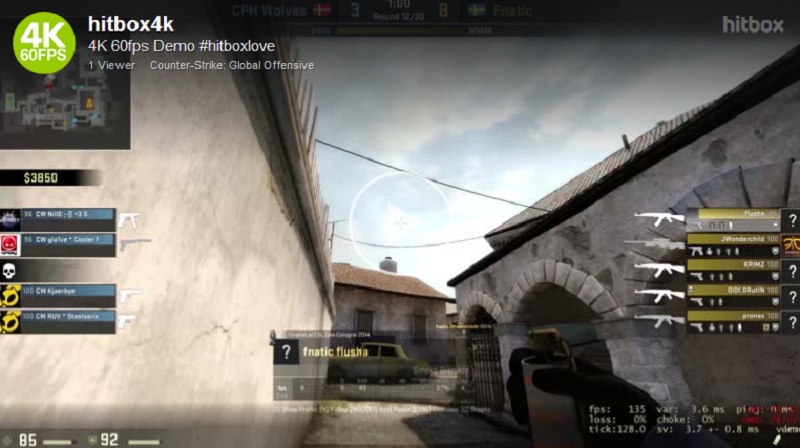 Above: Hitbox can livestream games in 4K.

Martin Klimscha: We’re creating a new experience in the livestreaming world. We want to bring viewers closer to the broadcasters and the content, giving them the option to participate in content creation. That’s why we’re focusing on new technology, on low-latency approaches. We’re bringing a realtime experience to both broadcasters and users, connecting them in real time. We have HTML5 chats, 1080p 60FPS streaming. Now we’re working on 4K streaming.

GamesBeat: The challenge is you want to push the envelope pretty far, but gamers don’t want to take away from the processing power running their game. Is it a heavy task to do both?

Klimscha: The bandwidth is there. A lot of people have bandwidth for watching 4K streams. That’s definitely possible. From a production perspective, though, you’re right. You need the processing power. You need a 4K camera if you’re recording yourself. But we already have tournament organizers doing that. We have some streamers with 4K equipment. Just yesterday I was talking to one of the biggest German YouTubers, and he’s just gotten his 4K setup. We’re the first to give streamers the option to use that.

Gamers are super demanding. They always want the best equipment. If they have the option to stream in higher quality, they’re probably going to go out and buy it.

GamesBeat: I’ve heard Nvidia talk about how the graphics cards are multitasking now. They’re at a point where if you’re playing a game and streaming, there’s zero impact on the game. I wonder how much of that is in place in the installed base, though.

Klimscha: We’ve tested a couple of graphics cards. We’ve seen the performance. As you say, you need processing power to handle the stream, but the components are out there. We’ve been pushing great streams for Counter-Strike and Heroes of the Storm. The quality is amazing and we’ve never had a problem with game slowdown.

GamesBeat: Why is Twitch not going as fast in this direction? Do they have too many users in their installed base who might be left behind?

Klimscha: The main reason is they’ve been out there a very long time. Once you’re running a 10-year-old company, you have a lot of legacy systems connected together. We have the option to start from scratch and take the best components on the market, optimize them, and combine them. That’s the basis for how fast we can be. Once we saw the 4K possibility, we jumped on it. We want to be the first with new technology.

It’s the same with HTML5 chat. We saw the need for that to achieve our vision, giving users the opportunity to take part in content creation. They need a chat system where they can do something in it. We could have easily taken an IRC-based chat like Twitch and others, but we went the extra mile. 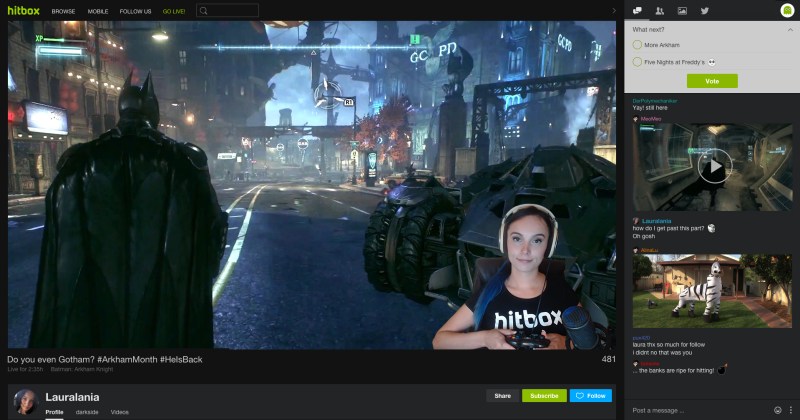 GamesBeat: You have Twitch and YouTube out there. Each of them seems to be trying to become more like the other. That’s the main competitive dynamic.

Klimscha: They’re like Coke and Pepsi. They’re both huge. We’re Red Bull. We’re pushing forward for what gamers need. We don’t have any plans to go horizontal. We want to focus on our core audience of gamers and deliver one feature after another.

Just yesterday we announced the release of the League of Legends connection we created for our player. When you’re streaming League of Legends and I want to see what champion you’re playing, I can click through the player and go into your champions and see what you’re using. It’s cool. People have more to do. That’s the most asked question in chat – what character are you playing, what runes do you have? Now you can use our player to get that information from their system.

The chat system is a very important part of our communications strategy and interactivity approach. You can post YouTube videos, pictures, GIFs. People love the GIFs. It’s the next step in how to do things. Very soon you’ll be able to do more things in chat, but we’ll have to have more conversations about that. We’re trying to use the chat to bring in and engage users more and more. We’re looking forward to showing it off more.