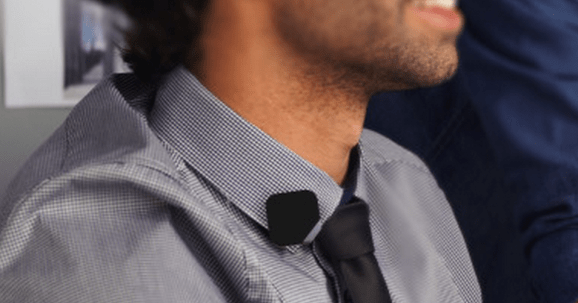 Each week our friends at Backerjack provide an update on a hot crowdfunded tech gadget. This week we profile the Myle Tap, which has exceeded its funding goal by more than 50 percent.

The smartphone has become the main conduit to the cloud that stores many of our precious expressions — photos, emails, and notes. It’s nearly always with us, but not always so easily accessed, for example, when we’re driving. And so smartwatches have emerged as a way to quickly get little bits of information out of the smartphone without removing its increasing profile from our pockets.

Myle Tap is, in some ways, the opposite of a smartwatch in that it’s focused almost exclusively on input, specifically, the jotting down of notes, random thoughts, to-dos, and short messages that often escape our memory. But the clippable microphone isn’t just a modern, smartphone-connected version of a voice recorder of the type once associated with reminders. The folder organization of those devices have been replaced with a host of app integrations for services such as Evernote and OneNote (which seem like naturals), Box.com, social stalwarts Facebook and Twitter, team app darling Slack, and to-do list Wunderlist, which was recently acquired by Microsoft, with more on the way. Because of the intelligent crowd it works with, Myle Tap identifies at least 15 different kinds of tasks with which it can help, from adding a to-do to your list to controlling the Internet of Things.

Despite it being a voice-driven product, Myle Tap does require a tap to get started. Therefore, it’s not truly hands-free. However, that does cut down on false activations and likely enhances battery life. The wearable product isn’t as noticeable as something like the Narrative Clip, but it’s large enough to arouse curiosity and wouldn’t be mistaken for something like a brooch. Myle seeks $50,000.

There have been a spate of microphone campaigns lately, including the high-end MikMe and the less expensive Instamic, but the Tap stands out because of its focus. A smartwatch and a beefed-up version of Siri or Cortana could replicate its features and even be a bit more discreet, but the Myle Tap is less expensive than most smartwatches and has the potential to get a lot smaller.

Also check out this gesture-controlled smartwatch band, this biometric door lock, and this virtual reality controller.