Content performance marketer BrightEdge scans the Web for content similar to your website’s and then scores yours competitively for search, sales conversions, and other things you might want to know.

But it’s a lot of analysis for anyone who’s not a data scientist to digest. So the company has created a new layer of intelligence on its platform, and today it is unveiling that layer’s first application.

It’s called Anomaly Detection, and, as the name suggests, it looks for out-of-the-ordinary events, based on triggers you set.

For instance, it can highlight that two pages of content have generated an abnormally high percentage of sales in the past two days. Or it can point out that there’s been an unusual four percent drop in “share of voice” — social sharing, search results — around camping-related site content.

For one customer, CEO and founder Jim Yu told me, Anomaly Detection showed that the bounce rate (visitors leaving a site after viewing only one page) “went through the roof” as content increased. It turned out that the additional content was being created by a third-party service, and it wasn’t good enough. 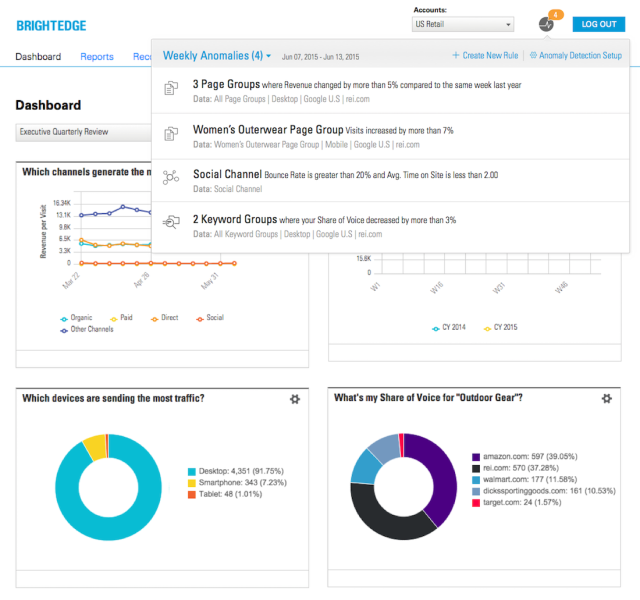 BrightEdge’s reason for being, Yu noted, is helping “marketers drive performance through content.” To do that, its Data Cube finds, stores, and analyzes a huge repository of content from the Web so it can see how your site compares.

But analyzing that content keeps getting more complex, he said, because marketers’ needs are increasing. He pointed to the increased interest in delivering content at exactly the right moment in a buyer’s journey, like presenting you with a white paper about types of life insurance just as you’re considering what to get.

Then there’s the complexity of the growing number of devices. “Specific types of content perform differently across devices,” he pointed out.

In March, BrightEdge launched a Landing Page Optimizer for Adobe’s Marketing Cloud. Designed to increase the performance of a landing page when compared with competing ones, the LPO was also the company’s initial effort to simplify its analytics and turn them into actions.

“When we did LPO,” VP of marketing Brad Mattick told me, “we started thinking — what could we do across the platform?”

The result was a new layer of data intelligence, called Data Quant, that employs predictive modeling, machine learning, and regression analysis to “make data actionable without employing a data scientist,” in Mattick’s words. Anomaly Detection is the first implementation of Data Quant across the entire platform.

Next on BrightEdge’s to-do list: Using Data Quant to make suggestions about what kinds of content you should have in the near future, based on trends.

Of course, lots of companies describe themselves as providing content intelligence or content optimization platforms. But, Yu said, they’re primarily focused on analyzing a site’s own content, not a site’s content in the context of the ocean of competing content known as the Web.

Besides BrightEdge, Yu said, only Google is making those kinds of comparisons through its massive search capabilities.

“Machine learning without the Data Cube isn’t that interesting,” he said.