[Updated to reflect a one-week launch delay for the iOS version. – Ed.]

Next week will mark the launch of a game that shouldn’t exist.

Corey King, a Canadian artist with zero game development experience, dreamed up Clandestine: Anomaly and named himself Chief Executive Artist at ZenFri, Inc. He wanted to tap into storytelling using a medium he’d never worked in: augmented reality (AR), where images and content is layered over the real world.

Instead of starting small, he created an ambitious plan, won the hearts of volunteers, and obtained the financial backing to create a prototype. That design and a mutual friend lured in Joshua Ortega, a writer on Gears of War and other AAA franchises, as well as graphic novels, regular novels, and all kinds of big-name projects.

Ortega then took on the challenge of writing a game where the main character is the player, whose literal, physical actions can help direct the action in game — something that makes traditional narrative very difficult.

Clandestine: Anomaly, an alien story/item/tower defense/offensive strategic attack game, launches for iPad and iPhone July 7 for $4 and Android “very soon” — while it’s still warm enough to enjoy a game that encourages you to go outside. 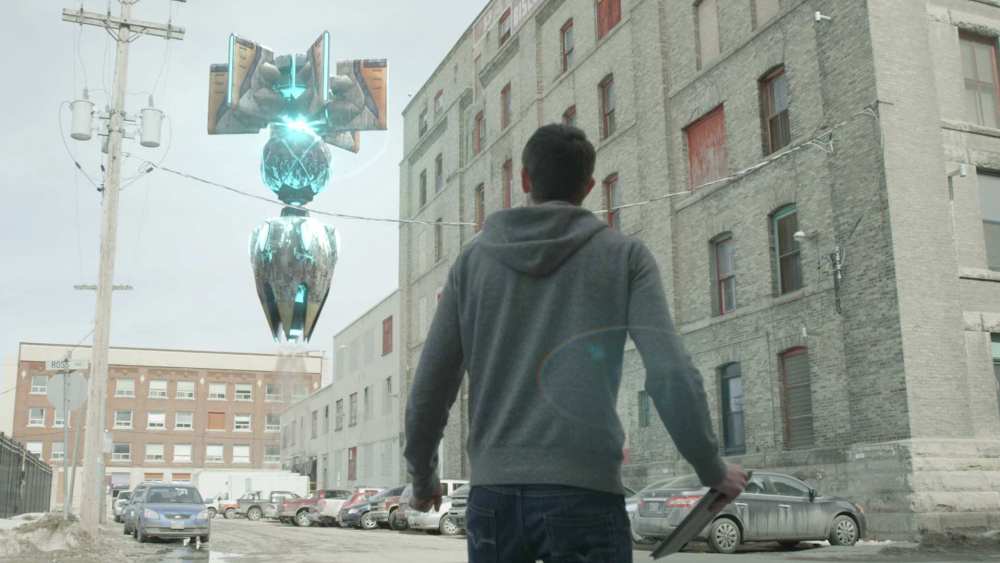 Above: You remember, outside: the place with the sunshine and the aliens.

Corey King: My key ambition with this was to learn how to create a story driven experience where the canvas is your neighborhood, where the real world environment is part of the story. I feel like a lot of AR games don’t have an emotional connection; they’re just things chucked randomly into the environment. But by using GPS and setting the story within your own neighborhood, we’re hoping that creates a deeper emotional connection that the story can drive and thrive upon.

GamesBeat: Did you have any previous experience in AR?

King: I call myself medium-agnostic. My project before this was an artsy book of written and visual works, and before that I did an art gallery show, and I’ve had films play across Canada. So this is actually my very first game project, my first interactive project. It took me a long time to get here because of that.

I had an iPod Touch about 4 or 5 years ago. I had it for about three hours, and just intuitively, not really knowing the technology on a real level, felt that things were getting close enough that you could start opening up this whole new canvas for storytelling, which was the actual world. At the time, I didn’t know what the term AR was. But I was like, I haven’t seen this yet, and I’d like to be one of the first ones to crack making that a compelling experience.

My main modus operandi is that I go where the story takes me, where the story needs to be. I’m never really shy about things. A certain amount of naivete was helpful in getting the ball rolling. Knowing what I do now, if I were to try and explain how hard it was, and what the learning curves were, I may not have done it. 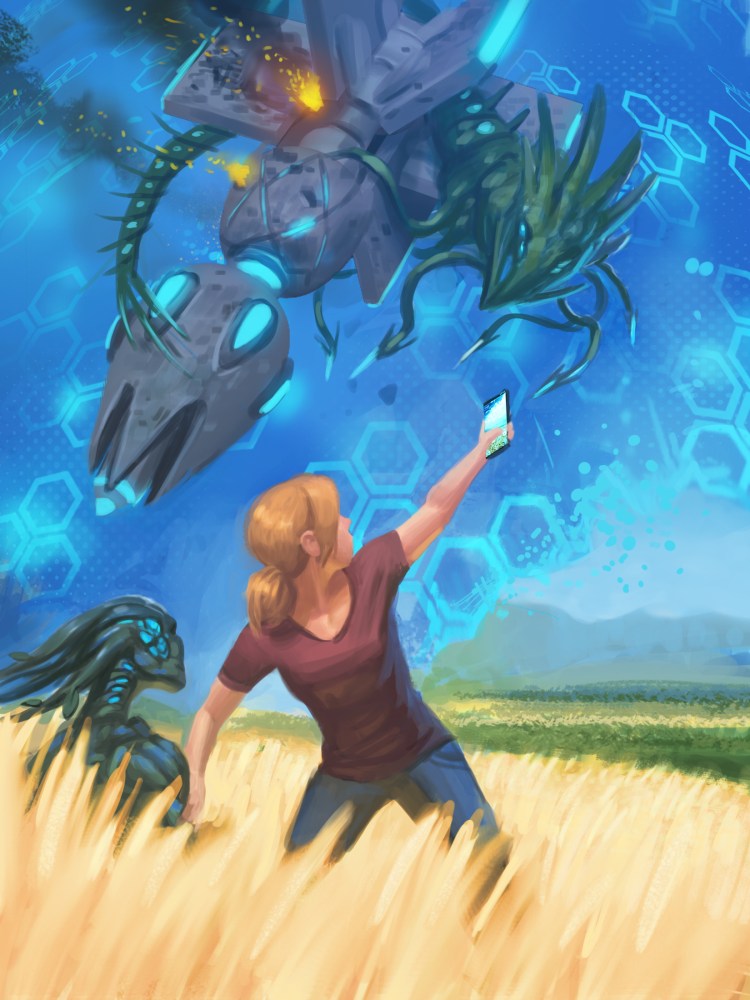 Above: Look out! It’s a wildly ambitious game plan!

GamesBeat: So how did the project come together?

King: I get really stupidly passionate about storytelling things, and just go full bore into it. The idea was novel enough that I was originally able to get volunteers. I tried as a stepping stone to do a smaller game because it seemed more logical. That never took off, because I never had the money.

I said okay, the smaller game is not going to work, which is what people tell you you’re supposed to do. So I just went for the crazy idea, and I could get people who would volunteer to help me. With them, we were able to get funding and build from there, until we got to a point where we had a prototype and could attract guys like Joshua to the project.

GamesBeat: How did you two meet?

Joshua Ortega: David [Green, a mutual friend] told me about the project and said, I think you should talk to Corey. We had been discussing some AR ideas over lunches and dinners.

King: I spoke at my very first conference ever, which was the Augmented World Expo about two years ago, about this game, and David lingered about afterwards and started asking me questions, and that’s how we met.

Ortega: He heard about my passion for AR. As much as VR gets so much coverage, deservedly so, at the same time, AR is still slightly underestimated with how much of an impact it’s going to have on daily life, let alone gaming. The possibilities are all there. It’s a fun frontier right now. Corey was one of the few people I saw who was approaching it seriously and seeing the capabilities of it.

GamesBeat: So describe exactly how AR fits into Clandestine: Anomaly.

King: It’s set in a 2 kilometer by 2 kilometer range — a little more than a mile square — that you actually help select yourself. An alien ship is crashing.

You’re not important. It’s not the type of story where you’re Sam Shepherd and you’re the chosen one. You’re just you. When you start the game, you start up a game called Clandestine:Anomaly, which is not this game, and when you go to press play it gets hacked. The aliens are hacking your phone and communicating with you, because they’re crashing and all their instruments are dead, so they don’t know where to crash.

So by helping them crash, you tell them where you are located, which sets up your home base and sets a range of safe area to play the game in. From that point, it’s procedurally generated campaign map. 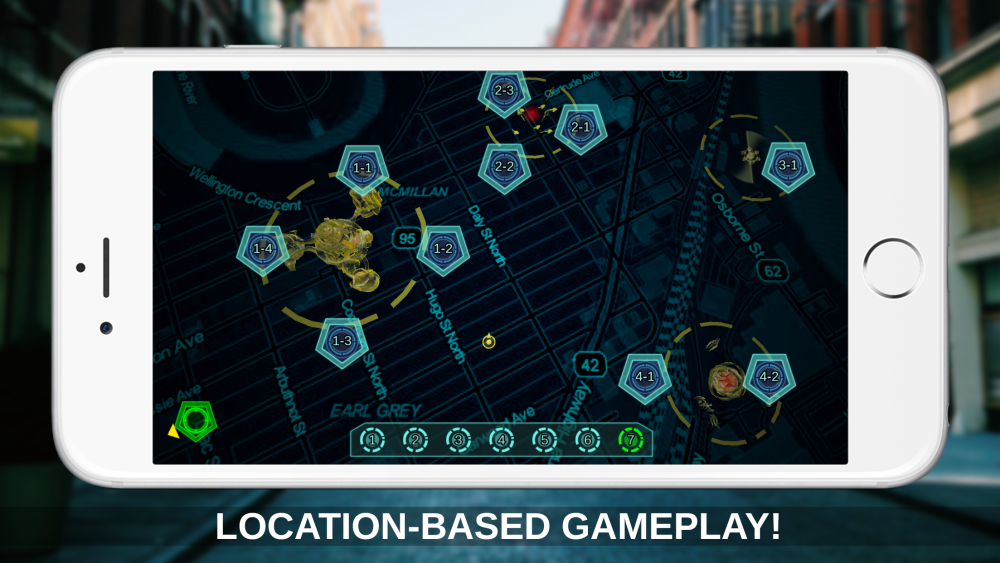 Above: A screen shot from the game. And some extra promotion, totally free.

GamesBeat: How closely tied is the game to your precise location?

King: We don’t have the processing power on mobile to do all the gameplay stuff and detect, “This is a river.” We rely on the user to choose a safe location and strongly hint to it. We try to be pretty forgiving with the specifics. You have to be within 300 meters of a location to participate in the augmented reality. That’s all geolocked.

You’re not actually forced to go. If something is three blocks away, and you want to access the AR side of the game, that’s a strategic option you choose, and you have to actually walk to that location, at most within a one-mile-ish distance. 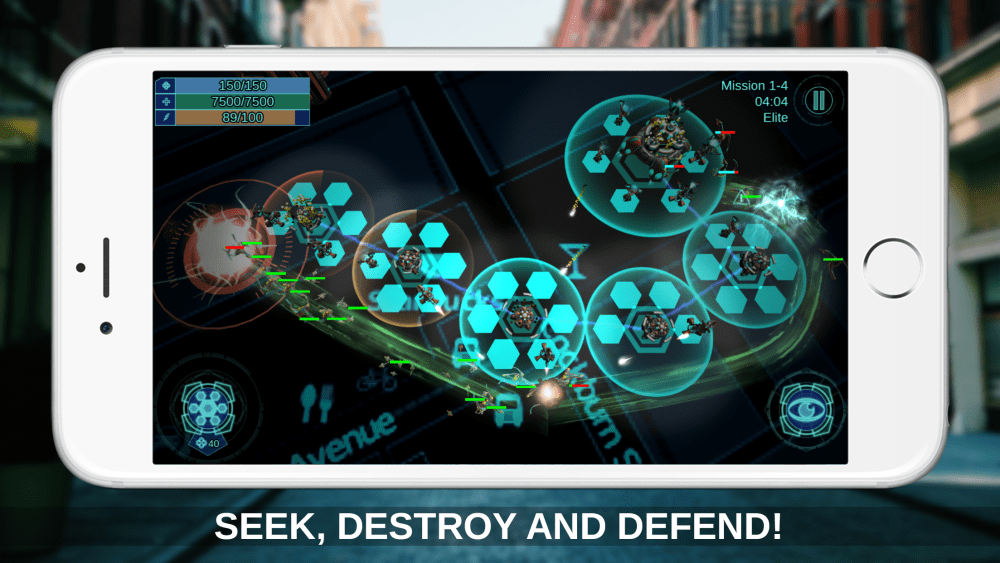 Above: Tactical attacks are still available even if you don’t want to go outside. Wuss.

GamesBeat: And if you don’t want a walk?

King: I’m from one of the coldest cities, Winnepeg Canada, and there are just days that you don’t want to force people to go outside to play. You can play, you can beat the whole game without ever experiencing the AR. It’s optional to go experience it, but we make it extremely powerful. By you walking, that’s like a power-up, and then you call in the most powerful abilities, which are air strikes, which directly relate to the tower defense, or Tower Tactics, side of the game.

If you don’t want to get up, you don’t have to — it’s a completely viable strategy. It’s another strategy to walk to the location and use all your abilities. In the game, your phone is not a gun. Your phone is a phone. Characters call you, characters text you. It makes sense that the battlefield commander could be both on the field of battle and working remotely, and so we supported both of those approaches. 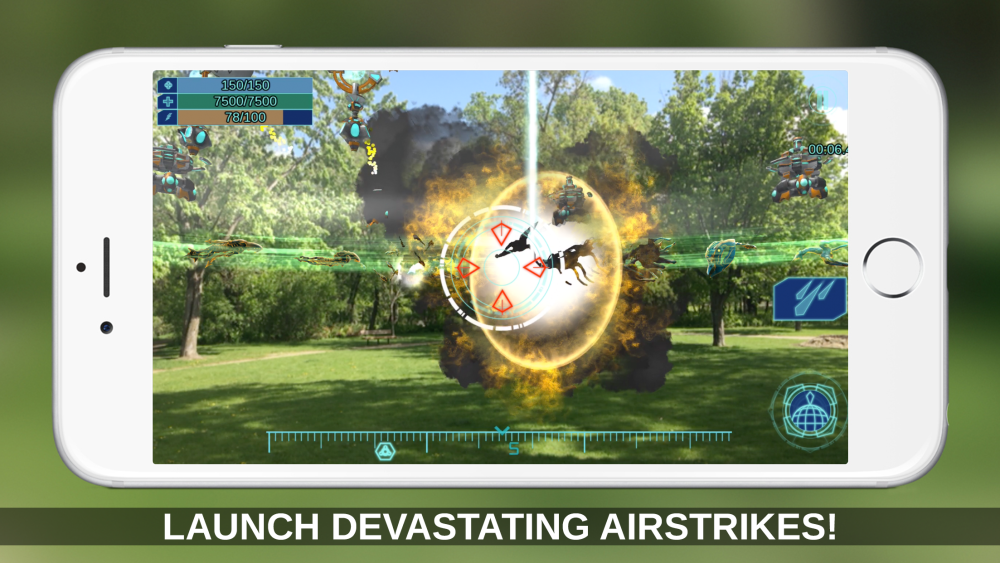 Above: A Clandestine: Anomaly airstrike. We did think we saw a blade of grass move in the background there.