GamesBeat: Do you have plans for this story beyond this game?

Ortega: Well, it’s not just a one-off. It’s an AR component of a potential trans-media universe.

King: We have a significantly sized universe bible, with multiple plans to deploy this depending on the market uptake.

Ortega: You never know what’ll click and what doesn’t. But like I saw with Gears, when you do certain things right, and when you get the gameplay sticky enough and catchy enough, you have the potential to do a lot of things in a lot different media with the franchise.

King: The one thing you can do with AR is it can be about you. Your character’s journey is completely encapsulated within this AR game and any other ones that we make. That is your story within the broader universe. But there are other parts of the universe — for instance, we’re not on Jupiter at the moment, so if there’s anything happening there or in a distant galaxy — those could be handled through other media and platforms…

[Laughs.] As if saying this is my first game, and I’m going to do it in a new technology wasn’t a little insane enough, I’m also like oh, it’s a Trojan horse strategy to a giant IP, hopefully. We’ll see. Now it’s in the hands of the consumer. 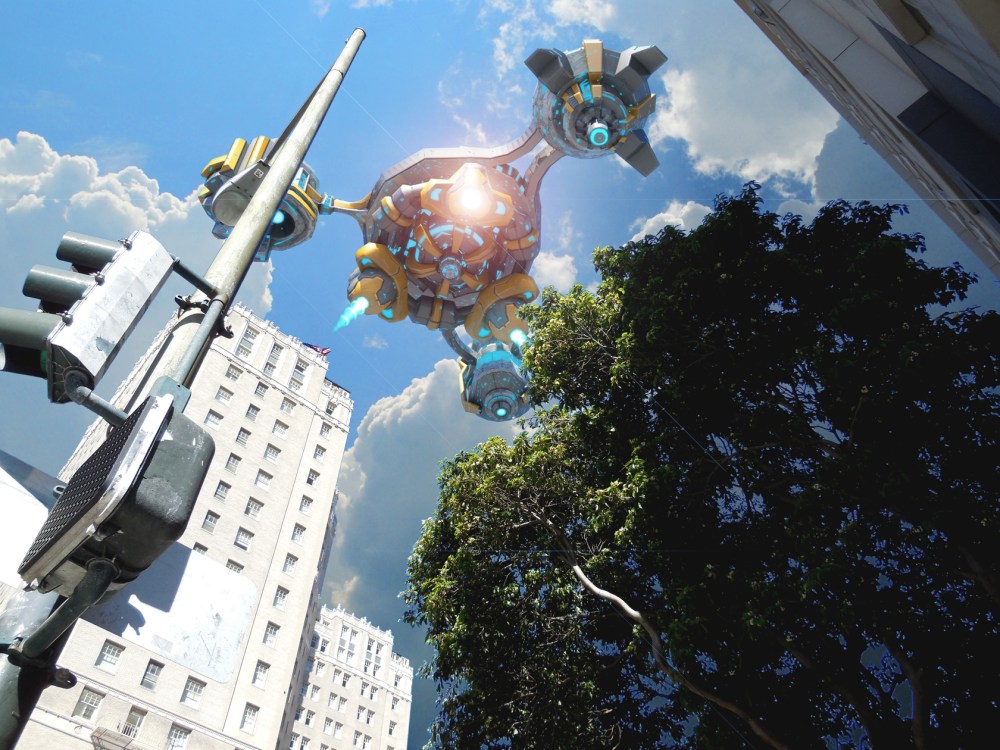 Above: This Command Center may be coming to skies other than yours soon.

GamesBeat: Josh, how was writing for this different than your work on Gears of War?

Ortega: All [games] are very different. I was at Zynga for a while. Writing for Facebook games is one thing. A mobile game is one thing. This is a mobile AR game, but it’s very AR, so that’s it’s own thing. We have so much delineation in video games now with telling the stories. They’re all very different.

Gears felt like one of the final stages of traditional storytelling for us when we were working on the trilogy, [a stage] where cinematics would always be the rule. There was an element of that in Gears, that everything was going to change after this in the way you tell stories, because of all the different devices and platforms.

On mobile, not many people want to sit around and watch a long cinematic. You don’t have the rapt attention that you do on an Xbox or a PS. They’re definitely different things. 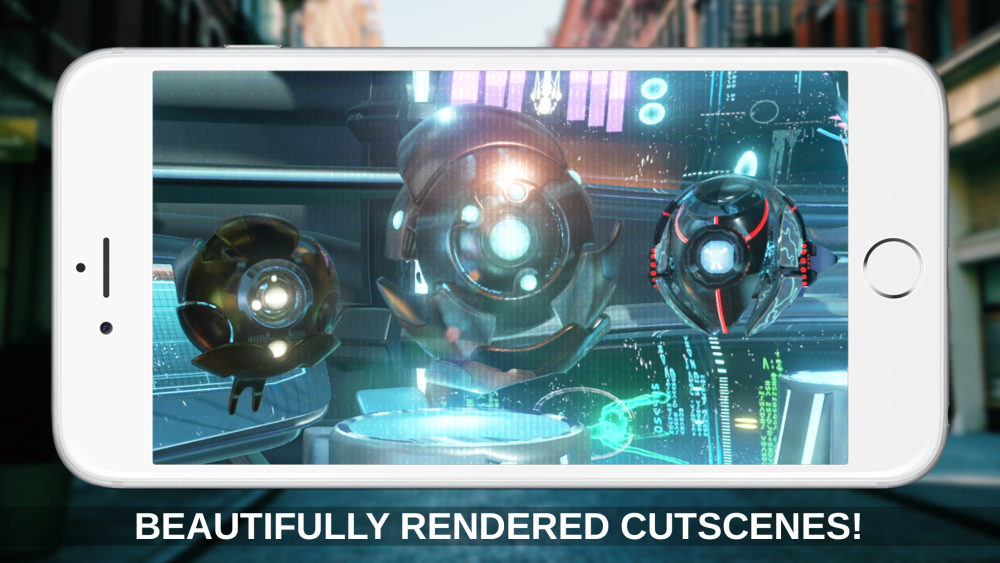 Above: No long cinematics, but some scenes still made the cut.

GamesBeat: How difficult is it to write a game where the player is the character?

Ortega: Much like social media, empowering the player to create their own story — it’s almost back to Choose Your Own Adventure, in some way. You want to facilitate their creation.

King: That was the hardest part of this medium, where we’re saying you, the actual human being, are the protagonist. We don’t know who you are, what your backstory is, where you’re located. Now to create an exciting incident and do all the things you do in a typical story without having the key details of your protagonist — [that] was one of the challenges. Trying to make it in their environment is how we’re trying to personalize it and make it about them. That’s something that’s distinctive from a lot of other mediums. 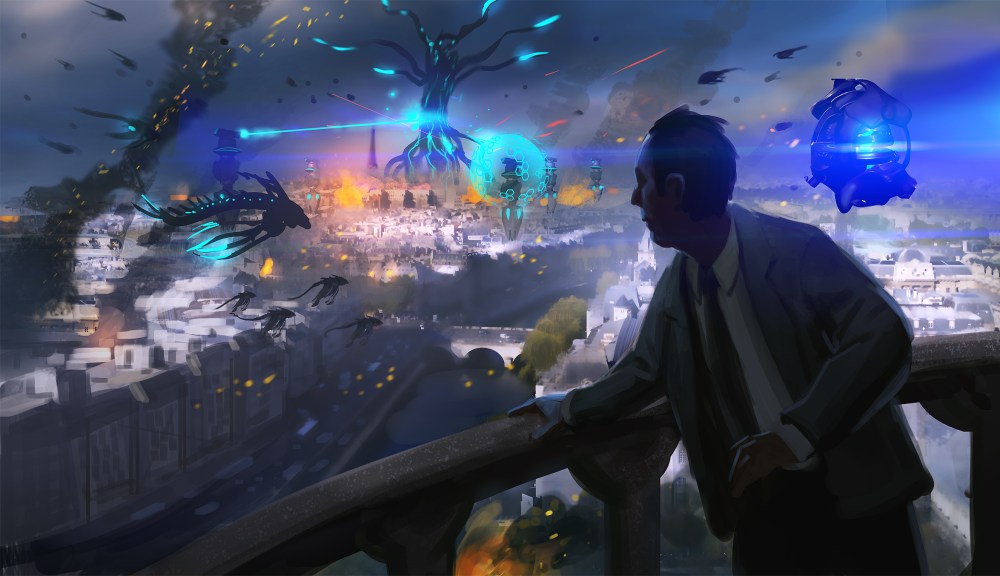 Above: It helps if your location is Paris. Clandestine will bring the aliens.

GamesBeat: What are the advantages and disadvantages of AR for your story?

King: We really feel that if you take an old system like Pac-Man and put it into an AR, which has been done, that’s not the strongest way to prove a medium. When films first started, they filmed plays, and it was horrible.

It needs its own language, its own medium, its own mechanics that reflect this type of game. It’s kind of like all these things, but it’s hopefully its own thing, too.

Joshua: I think that’s what so exciting and fun and vibrant about it as a medium. It’s not just a gaming application of AR but a real-world application … when those merge, then incredible stuff will start opening up, as technology starts catching up with some of these ideas.

As HoloLens and Glass start becoming more common, you’re going to have narrative techniques that you could use from Gears of War or Godfather or Aliens. You will have those same capabilities within the AR experience. When it’s on your face, and you’re seeing a whole ‘nother world around you … Think of the [Star Trek] holodeck. We’re close to the holodeck now.

The first really good horror game on HoloLens is going to be so frightening. Can you imagine, when the world around you is layered, and it really looks like monsters and things are coming at you? If you choose to exist in that universe, you’re going to be in this whole wild new world. AR is the matrix.

Above: We think we may have seen one of these things in the Matrix.

King: You lose a lot, but you get something no other medium gets: the real world and its environment. Every medium has its strengths. Every story is best told in a particular medium. That one piece is the thing that AR has that no other medium has, including [virtual reality.]

VR is transporting you. AR is transforming the things around you. We’re still developing the techniques. This is a little early toe-step into it.

Ortega: We’re in the Lewis and Clark stage of AR right now. I don’t know if anyone has reached Oregon yet.