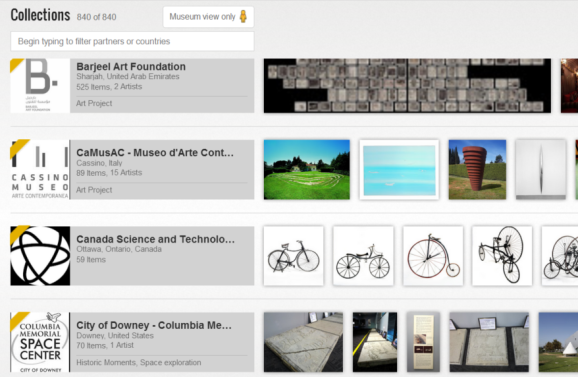 Google is ramping up its online exhibition space with the news that it’s bringing 80 new museums to the Google Cultural Institute, effectively doubling the amount of artwork available on its platform.

The Google Cultural Institute is the Google arm responsible for working with art and cultural bodies to help digitize offline exhibits — this includes documenting the history of cinema, Nelson Mandela’s time in prison, the fall of the Iron Curtain, and more.

Among the new exhibitions are more than 40,000 objects and 3D imagery from the Freer and Sackler Galleries in Washington D.C.,which let you traverse the venue using Street View-style panning and scrolling. There’s also 45,000 images from the National Gallery of Art.

A myriad of smaller exhibits have also been added to the mix, covering everything from psychiatric museums to the evolution of dolls through time.

This launch represents the biggest single collection that’s been added to the Google Cultural Institute since its inception back in 2011, and brings the total sum of artwork to 170,000 items, up from 90,000 previously. There are also six million photos, videos, manuscripts, and more available to view.

Today’s launch comes six months after Google opened up the Cultural Institute as a platform, letting museums and galleries create their own dedicated apps. This leans heavily on Google’s technology, as you’d expect, including tools such as YouTube and Street View. It’s designed for those without the technical nous to create their own apps from scratch.

Google also recently launched a neat new extension for Chrome that displays a fresh piece of art from the likes of Van Gogh or Monet each time you open a new tab.