When you’re a game designer stuck in the woods without a computer or other resources, you only have one option: Wait for a punk-rock kid to rescue you.

One of the more surprising games from the Electronic Entertainment Expo trade event earlier this month was Unravel. Its art style simultaneously exudes joy and melancholy. I played it and found that this look is a reflection of the story, characters, and world of Unravel. But as interesting as this is, the game almost didn’t happen. That’s because creator and lead designer Martin Sahlin was on a camping trip when he got the call that his team at developer Coldwood Interactive needed to pitch the game. 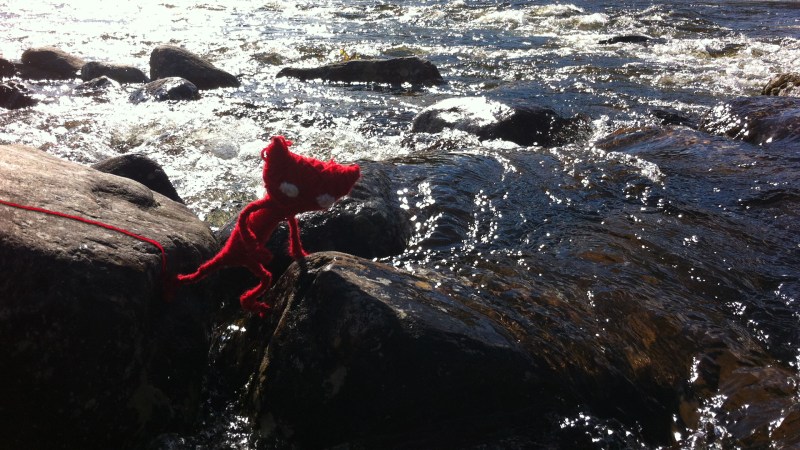 Above: Yarny crosses a river during Sahlin’s camping trip.

“Martin was on vacation,” Coldwood Interactive chief technology officer Jakob Marklund said during a presentation at E3. “And he got a call from our CEO who told him that the team needed pitch material really quickly because there was some interest in the game.”

But Sahlin told him that was impossible. He was in the middle of nowhere, and he didn’t have a computer or an Internet connection. Holmberg didn’t want to hear those excuses. He wanted — needed — something to show.

This sent Sahlin scrambling to deliver. First thing he did was check his own supplies.

“Martin had a piece of wire, but he had no yarn,” said Marklund. “So he started looking around for stuff to use, but the forest didn’t have anything.”

At this point, Sahlin was feeling hopeless. But he decided to go check with some other campers, and that’s when it happened.

“[Martin] found a punk-rock kid who was knitting besides a tent,” said Marklund. “He asked if he could borrow some yarn, and the punk-rock kid said, ‘Yes.'”

This gave Sahlin everything he needed to create Yarny and present his idea for Unravel. 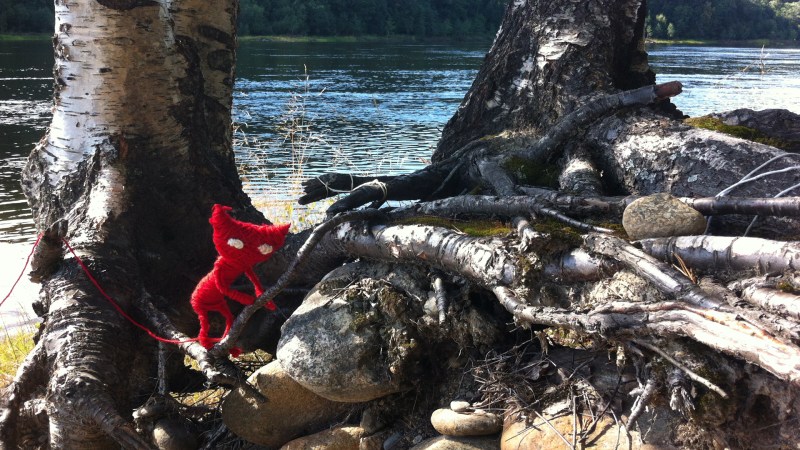 Above: Yarny from the original pitch images Martin Sahlin put together in the woods.

Now, armed with Yarny, Sahlin turned to his surroundings to place the main character of Unravel in dangerous situations. In the images that Sahlin took, you can see the little red character struggling to overcome natural obstacles while his yarn dangles off-frame. This early idea is still the core of Unravel, as that string — and Yarny himself — are the physical manifestations of the connection between a grandmother and her family.

These early images also served as the obvious basis for the game as it exists today. Yarny in Unravel looks almost exactly like the Yarny that Sahlin pieced together in the forest. It’s set in a natural, wooded part of the world that looks like what you see in these early photos.

Check out some of the game in action from publisher Electronic Arts’ E3 presentation:

And to think that this is partially possible because of some punk-rock kid knitting in the woods. Who knows? Maybe he’ll show up in the game as well.