Some of your deals look likely, but others are very iffy. So you don’t want to put the iffy ones in Salesforce, because your manager will hound you about them.

That’s the idea behind AppMesh’s SalesMesh. It offers a kind of smaller, parallel deal- and customer-tracker for sales reps, so they can commit their opportunity and deal info only after it’s congealed.

Today, the San Francisco-based company is releasing version 3.0, with some communications capabilities for collaborating with other sales team members on the side. It’s available for iPads, iPhones, and iPod Touch.

CRM is “great for the corporation, but not for end users,” CEO and cofounder Leo Tenenblat told me. “We’re actually legitimizing what already happens,” he said, because reps already communicate outside Salesforce.

SalesMesh began by letting reps decide which data to record and share via Salesforce. Now it allows reps to decide which info they want to share with others. Eventually, Teneblat said, the aim is to cover as much as 80 percent of a sales rep’s functional needs so Salesforce becomes more of an option for the final commit.

The application automates the saving and organizing of emails, calls, notes, contacts, and calendar events, and it works offline. Data can be synced between mobile devices, and reps can choose which data to automatically synchronize with Salesforce.

Version 3.0 adds collaborative note-taking and shared opportunity/contact/activity management. Info like the stage an opportunity is in can be shared with anyone, whether a team member or a partner company on the outside. This allows reps to avoid having to use email or file-sharing apps.

Tenenblat noted that reps already have a lot of options for privately sharing with a fellow sales rep or a vendor, but said 3.0 allows easier access to deal info. He added that CRMs generally “don’t let anyone communicate outside the company,” such as with partnering companies.

Sometimes, the sales manager is part of this parallel communication chain, he said, because the manager is responsible for forecasts and they might not be ready to include an iffy deal in the master record of Salesforce. SalesMesh is only integrated with Salesforce, and the company does not currently have plans for integration with other CRMs.

“It’s not a matter of hiding,” Tenenblat claimed. “It’s a matter of timing, [because] they don’t want to share until it becomes more baked.” 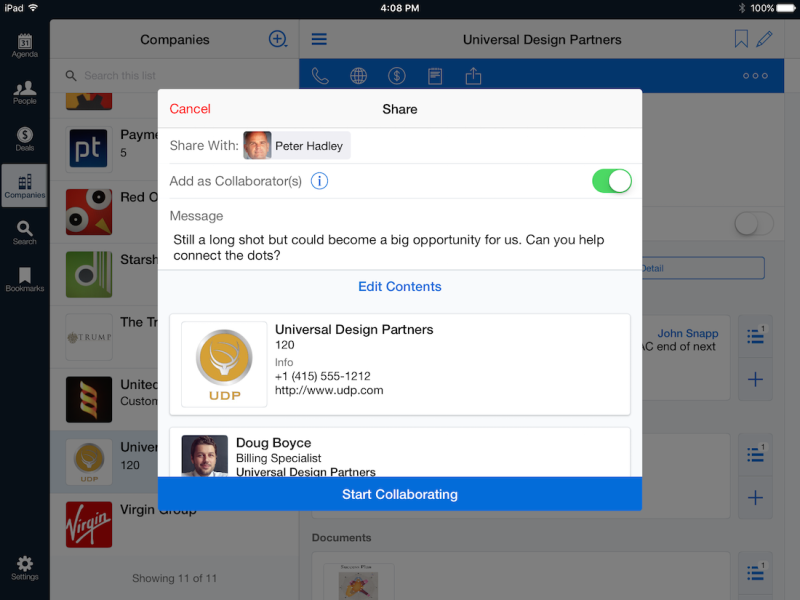 Above: A collaboration screen in Version 3.0 of SalesMesh

How high up does the chain of parallel communications/record-keeping go? It depends on the situation, he said. Sometimes the lowest junior rep wants to share everything with the Salesforce system of record, and sometimes the key players under the C suite want to keep a deal off the books until it’s ready.

He estimated that perhaps a third of sales reps “share everything with the boss,” a third keep their deals private until they’re ready, and a third are in between.

SalesMesh has a free level, with a professional level at $8/monthly and a Rainmaker level of just under $20/monthly. So, unless the rep wants to bear the monthly cost of premium levels, at some point the manager will know they’re using this service.

Tenenblat pointed out that only about 30 to 40 percent of the platform’s users even have Salesforce. The rest are using SalesMesh not as a parallel CRM, but as their only CRM. The company said it doesn’t disclose the number of users, but noted that it has had “tens of thousands” of downloads.

SalesMesh’s main competitor, he said, is the collection of apps that reps use every day, like calendar, email, and spreadsheets.

He added that companies like Clari, Selligy, and Tact “have some similar core functionalities, like calendar and email integration, but overall they are still focused on the company’s needs, not the individuals.” They enforce the reps’ workflow and capture every bit of data into Salesforce or other CRMs.

Others are “CRM substitute applications like Pipedrive and Base,” he said, but those are sold to companies instead of individuals, and they focus on things like forecasting and analytics.

“None of them have this direct person-to-person collaboration capability that we are now launching,” he said.