The London-based company has created a digital marketing platform that it says is compliant with data privacy laws such as the Children’s Online Privacy and Protection Act (COPPA) in the U.S. as well as upcoming European Union regulations. It includes parental consent. The idea is to simplify life for developers who want to reach children on digital platforms with advertising — a somewhat risky business.

SuperAwesome’s existing Awesome Ads platform sees use from hundreds of brands and agencies in the U.S., U.K., Australia, and Southeast Asia. Clients include Lego, Warner Bros, Hasbro, Disney, Nintendo and many others.

The company said it will enable kids content developers, both publishers and brands, to use its ad platform to reach the under-13 market. It offers this “compliance as a service” platform that makes it faster, easier, and safer than ever to reach kids with custom content, the company said.

The platform includes user registration and “federated identity,” which allows SuperAwesome to identify a child and establishes a single sign-on solution. It also includes a verifiable parental consent process, a hosted portal for parents that gives them full visibility on what data KWS-enabled sites capture on their children. And it has a kid-safe loyalty club that rewards users for participation and helps build engagement.

SuperAwesome revealed that the KWS platform is already in use with some of the biggest kids brands in the world, including Hasbro’s My Little Pony and Walker Books’ Alex Rider.

Kay Green, Hasbro marketing director for the U.K., said in a statement that her company will create a Friendship club for its My Little Pony franchise using KWS. 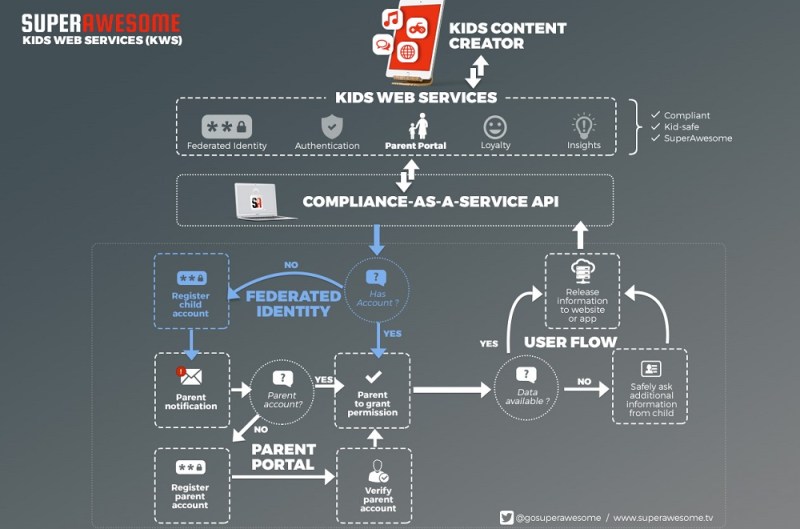 Above: SuperAwesome’s process for delivering ads to kids.