The formerly unknown band Spring King is loving life today, after having their song “City” played at the very top of the first broadcast of Apple’s new Beats1 streaming radio service. 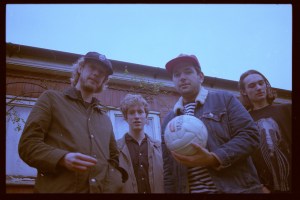 The official Beats1 broadcast started at 9 a.m. PDT Tuesday. In the half hour leading up to that time, main DJ Zane Lowe could be heard addressing problems with the broadcast. But by 9 a.m. things seemed to be worked out.

“Alright man we’ve got to kick this thing off at some point,” Lowe said at the strike of 9 a.m. Shortly after that, Spring King’s song started.

The band seemed to appreciate it, calling Lowe “a legend” in a tweet.

yo @zanelowe are you kidding?!!?!? you just spun our tune! you're an absolute legend!!

Actually, we may have just heard the most important three minutes of Spring King’s career this morning.

And, by the way, the song fairly cooks. Check out the video: