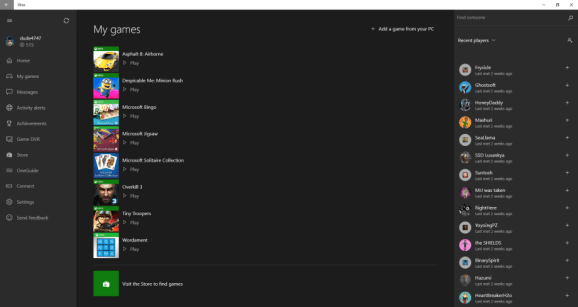 The Xbox app on Windows 10.

We now have a better idea than ever about how gaming will work on Windows 10.

Microsoft’s latest preview build for its upcoming operating-system upgrade has added a number of new Xbox features for PC gamers. Windows Insiders, who can test Windows 10 for free, will get a look at the revamped My Games section of the Xbox app as well as improved sharing options and account controls. These are basic features, but they further flesh out what we can expect from Windows 10. These also add to a list of Windows 10 Xbox app capabilities that include game streaming from an Xbox One.

While this preview is interesting because of Windows 10’s imminent release, it may also provide us with some idea of what the next Xbox One interface update will look like. We got a look at the first overhaul to the UI during the Electronic Entertainment Expo trade show earlier this month, and it definitely has a lot of the same DNA as what Microsoft is doing with gaming on Windows 10.

Here is a breakdown of what’s new in Xbox app: