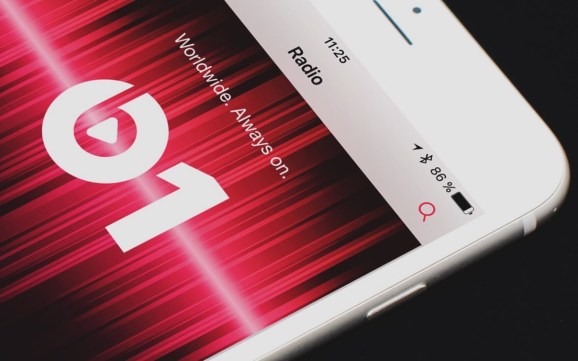 Apple unveiled new stuff today, so the Internet has been a predictably annoying place to be.

The big thing was Apple Music, yet another entry into the subscription music streaming field that Tidal has spent the past few months dominating like an unstoppable money-making force. Just kidding.

But tucked inside this big, complicated new service is Beats 1 — a live, 24-hour radio station broadcasting from New York City, Los Angeles, and London. Live broadcasting is an interesting foray for Apple, and they built it the same way they build most things — by paying out the nose for the best people. That means shows hosted by a bunch of famous musicians and regular programming from some of radio’s biggest names.

It started off charmingly shaky. Those who instantly updated to iOS 8.4 were treated to Zane Lowe, Beats 1’s flagship DJ, quietly sound-checking while Brian Eno’s masterful Ambient 1: Music for Airports played in the background.

“Alright man, we’ve got to kick this whole thing off at some point. We’ve spent the last 3 months trying to build this radio station, and we now can build no more. We must launch.”

After a brief introduction, the inaugural broadcast was a single from Spring King, a little-known band from the U.K.

“That’s exactly the kind of story, the kind of record we need to kick this whole thing off with,” Lowe explained. “Because, man, it’s not about fanfare — that’s fireworks and a hangover the next day. It’s about quality and consistency. We’re Beats 1. We’re worldwide and from now on, we’re always on.”

Not a bad introduction!

Here’s a playlist (from, uh, Spotify) that will catch you up on the first hour or so.

Most of Beats 1’s ballyhooed programming, like exclusive interviews and performances, won’t begin until tomorrow, but I spent a few hours listening in and I was pleasantly surprised.

Here are some pros and cons:

Zane Lowe — Back in February, BBC Radio 1 lost its beloved leader. Lowe’s eponymous show was a launchpad for artists on the fringe, in-depth artist interviews, and blockbuster world premieres. Whatever Lowe is getting paid, it’s probably not enough. Even if the other 22 hours of programming is pure static, there will (hopefully) be an army of devotees tuning in to hear what Zane is excited about.

Recommendations are garbage — Some of my idiot friends maintain that a program can curate music as well as a DJ. It cannot. I don’t doubt that I will be wrong someday, but nothing today holds up. Pandora is garbage, a feedback loop for unadventurous listeners. Spotify, which I love dearly, offers recommendations that are thin, repetitive, and boring. Nobody can challenge your ears and deepen your tastes like a great DJ. That’s why Apple bought the best in the world.

Death to Clear Channel — One of the most exciting thing about Beats 1, from my vantage, is the idea of a real live radio station with a huge audience that isn’t part of Clear Channel’s comprehensively evil empire. Clear Channel is, without question, the reason that radio spent two decades becoming the audio equivalent of a mall food court. Their iHeartDisease rebrand was 50 percent a push to stay relevant in the digital age and 50 percent a Blackwater-style switcheroo.

Live radio is fun — Anybody who’s ever been on a long drive — overnight or in the middle of nowhere — knows the small comfort of a DJ or host reading the weather, traffic, and some headlines. There’s a human connection that a Pandora station will never, ever be able to match. It feels good knowing that Zane Lowe or St. Vincent or Drake is in the studio,  typing away, trying to find something great to show you.

There are ads. Ugh.

It shouldn’t be so hidden — While some have praised Apple Music’s integration with iTunes, Beats 1 is buried inside the app under the generic “Radio” label alongside dozens of disparate stations. Despite being staffed and programmed by some of the most revered names in music, it’s jammed inside of a clunky app next to a handful of workout mixes, oldies, sports, and the like. Beats 1 deserves better placement — it’s good enough to stand alone.

Zero integration with the rest of the app — If you like a song you hear, you can’t “star,” “fave,” or “like.” You can’t do anything, except write it down. Why?

It’s still censored — I really dislike that all of this is getting filtered through Apple’s bullshit PG cheesecloth. Dr. Dre, for example, sounded absolutely terrible. It undercuts the impact of playing a song off The Chronic (an Apple Music exclusive) when you lop off half the lyrics. These “clean versions” taint the entire product and make it feel like a 24-hour Apple Store playlist.

I’m paying $9.99 a month. I have no children. Why is access to unedited product out of the question?

Most of the “real” programming will begin tomorrow — starting, bizarrely, with an interview from Eminem.

I can’t wait to hear the clean version.