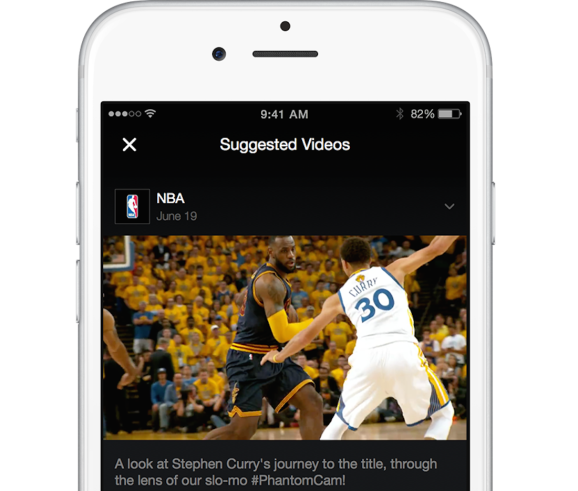 But at least one analyst says that the current emphasis on how long a video ad plays is missing the evolution of the mobile video ad.

Today, the social network giant said it will offer a 55 percent revenue cut to video makers for ads that are shown before or during videos in its Suggested Videos test — the first time Facebook will share video revenue.

The videos are ones that are displayed in the Suggested Videos section of News Feed, currently in testing on some users’ iPhones.

Tapping on a video in News Feed brings up additional video suggestions below the first video, related to the same topic or from the same publisher. The videos play as the user scrolls. So, a funny short video about a kids’ baseball team, which was suggested and played along with several Major League Baseball clips, will split 55 percent of revenue with the other clips, depending on how long each one played.

Facebook said that a first phase will simply test how the ads in Suggested Videos perform, without charging advertisers.

VP of partnerships Dan Rose today told Re/code that a lot of the company’s media partners “have said this will be a big motivation to start publishing a lot more video content to Facebook.”

“That’s exactly what we’re hoping for.”

Interestingly, this split is the same offered by YouTube, whose dominance of the online video environment is clearly in Facebook’s sights.

Yesterday, Facebook made video advertisers a bit happier. It announced they had the option of paying for videos only if the video has been viewed for at least 10 seconds. Otherwise, the advertiser is charged as soon as the video ad starts playing — even though the user may have already clicked a link to go somewhere else.

Facebook spokesperson Elisabeth Diana told me that the company’s definition is that, if it autoplays on the page, it is viewable. This requires half of video pixels to be in view. She also confirmed that, given the longer viewing requirement, there will be a premium charge determined through the ad auctions.

“YouTube has offered a similar viewing time guarantee on their video ads for years now,” Forrester vice president Nate Elliott pointed out to me via email.

He noted that, given the premium, this may “not be as clear a win for advertisers as it first appears.”

“YouTube’s guarantee, by contrast, is much more compelling. To quote the company’s site: ‘You pay if they watch for at least 30 seconds or to the end of the video (whichever is less).'”

VB Insight’s VP of research John Koetsier pointed out that “mobile competitors such as Millennial Media and 33Across [have already] announced 100 percent viewability guarantees for advertisers.”

And all of this is just an “interim happy medium between publishers and advertisers,” Jennifer Wise, also a Forrester analyst, told me in an email. “But [it] won’t set the long-term standard.”

In the essential arena of mobile, she noted, “video ads are in transition.”

“Mobile advertisers have truncated their ads to 15 seconds for mobile, but that’s too long,” she said, advising that mobile advertisers should be prepared for video ads in the single digits of seconds. These are being driven by YouTube’s allowance of a skip on a video ad after seconds, she said, and by the ability to “pass through [native] ads as quickly as content.”

“Video ads on mobile aren’t TV commercials,” Wise noted. She added that they are evolving their own form “with short content clips as teasers of information [or] options to opt in to see more instead of auto-playing the whole message.”

“What they lose in time they will make up for in interactive features — being [complemented] with text and rich-media overlays to leave an impression on the consumer not using audio or flying by the ad.” This will continue to move metrics away from viewability, she predicted.