It’s weird to say that a game about a blind girl made me happy.

But that’s how I felt at the end of my Beyond Eyes demo at this year’s Electronic Entertainment Expo tradeshow. It stuck with me in a way that no recent game demo has (it was my favorite game from E3). Coming this summer to Xbox One and PC, Beyond Eyes is about a young girl named Rae. Before an unfortunate accident made her blind, Rae was a cheery and outgoing child. After the incident, she stopped playing outside and spent much of her time indoors.

The game begins when her best friend, her chubby red cat Nani, goes missing. Rae has to build up the courage to leave her home if she ever hopes to be with Nani again. The first thing that struck me about Beyond Eyes was its minimalism. Outside of the main menu, it doesn’t have a traditional user interface. You won’t find any text in the game, and while it has spoken dialogue, it’s in a fake language.

Most of Rae’s world is a blank white canvas, and the environment unfolds like a beautiful watercolor painting as Rae explores it. Since Rae wasn’t born blind, she’s familiar with the immediate area around her home. She knows that the sound of water trickling by her house is from the fountain in the garden. The sound of laundry blowing in the wind is coming from the clothesline.

Rae uses her memories, audio cues, and the rest of her senses to interpret the world. But she isn’t always right. If she’s unsure of what something is, it’ll appear hazy on-screen, like looking at a mirage in the middle of a desert. The image clears up if she approaches it. 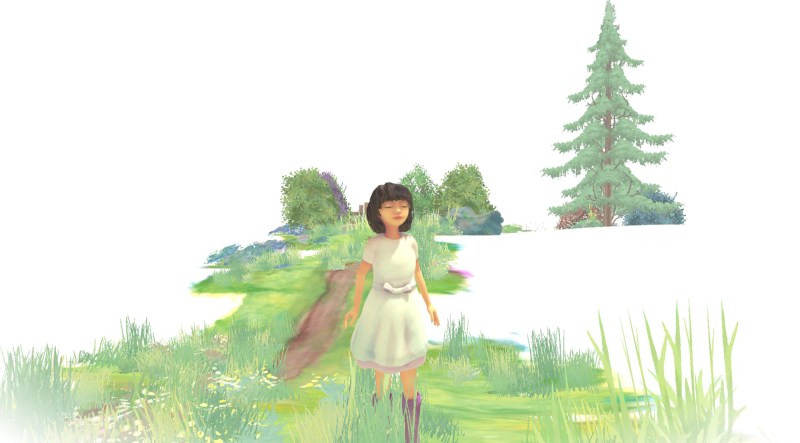 Above: Places you’ve already been to stay on the screen, forming Rae’s “memory map.”

In the demo, Beyond Eyes creator Sherida Halatoe jumped ahead to a moment where Rae once again heard the sound of water in the distance. Because her only reference for that is the fountain, that’s what we saw. When Rae walked up to the blurry image, small pink ribbons representing her sense of smell scrubbed it away to reveal a leaking drain pipe. In a different area, another sound reminded her of the clothesline, but it turned out to be coming from a scarecrow. Beyond Eyes will have a lot of misdirections like that, some of which will be scary for Rae.

If she’s uncomfortable or terrified, you’ll see it in her body language. She’ll hunch her back and cross her arms. In the scarecrow scene, crows were cawing at her. But because she couldn’t tell how many birds were around her, a lot of crows appeared to illustrate how scared she was. The player can decide whether to push Rae into these situations. Halatoe could’ve had her walk past the crows if she wanted to.

Rae remembers these experiences. When she stumbled on another flock of birds, she immediately became cautious. But upon closer inspection, it turned out the birds were just chickens. Now, whenever Rae hears chickens, she won’t be afraid to interact with them.

By exposing her to these unfamiliar elements, you can unlock new parts of the world for her to walk through. Beyond Eyes won’t tell you if she learned something, so you have to pay attention to the way she reacts. It’s a very subtle way of making Rae more confident in her abilities. The gameplay evoked a sense of wonder and discovery that I haven’t felt in a long time. It felt new and intriguing. 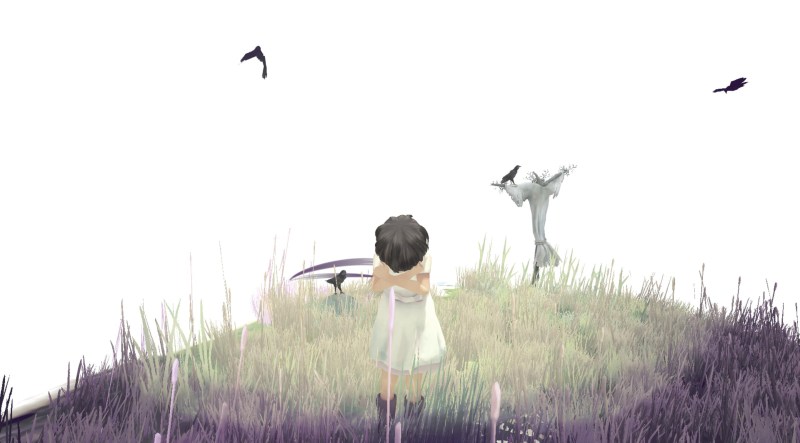 Above: Some places are uncomfortable for her.

Why it’s the right time for this kind of game

The story of Beyond Eyes doesn’t stem from a personal moment or event in Halatoe’s life. She made the original prototype as her graduation project while studying game design in college. As part of the process, she interviewed people who are blind to find out what life is like for them. A lot of the things Rae encounters in Beyond Eyes came from their answers, like the importance of following a routine and how normal interactions can be dangerous if approached in the wrong way.

After graduating, Halatoe worked on Beyond Eyes by herself for a few years before partnering with Worms developer Team-17 last August. Then in December, Microsoft’s indie game arm, the ID@Xbox program, offered additional support for Beyond Eyes. In addition to having a meeting room at Microsoft’s E3 booth, the company provided Halatoe with a team of 12 developers to update and finish the game.

“A lot of the game that I made has been remade. Because everything I did by myself — I took a few shortcuts, so it wasn’t running very well. It had some difficulties,” said Halatoe. “It’s basically my design being upgraded with higher standards, I guess [Laughs]. To be honest, I still really love the original game that I made. It was very colorful and [it looked like] a children’s book illustration. But this is taking it a step further.” 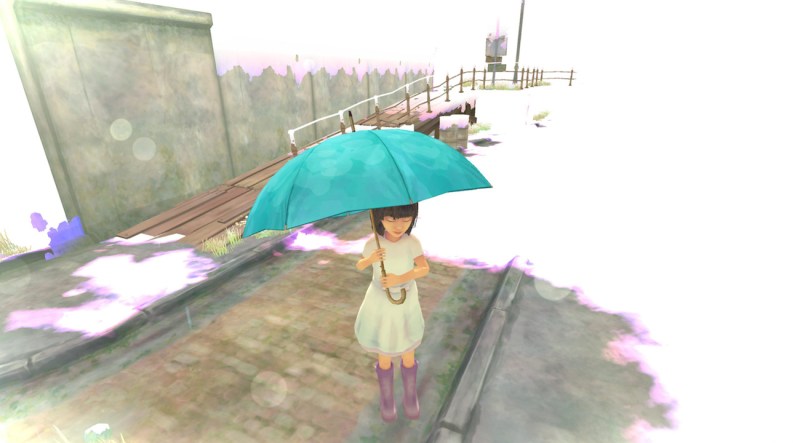 Above: Rain drowns out her sense of sound and smell, so it erases the world around her.

Games like Ico and Shadow of the Colossus led Halatoe “down this path” of creating emotional, character-driven stories. But it was Tale of Tales’ The Graveyard that was her biggest inspiration. The Graveyard is a short game about an elderly woman walking through a cemetery. If you try to make her walk faster, she’ll stumble, making you feel bad for her. Halatoe enjoyed seeing how the game could elicit that kind of emotional response from the player.

“It kind of showed me that there was a whole genre of games that were, at that point, not really being used. Times have changed now. This year and the year before — we’ve seen a lot of these games emerging,” said Halatoe. “But a few years ago, that was something that people were not ready for and were just talking like, ‘Ah, that’s just weird art shit.’ … I feel like a lot of people did a lot of the work before me. I feel like I just came in and rode in on their coattails.

“They worked very hard for these games to get recognized by the mainstream public. I’m in a very fortunate position that people are ready for [Beyond Eyes].”