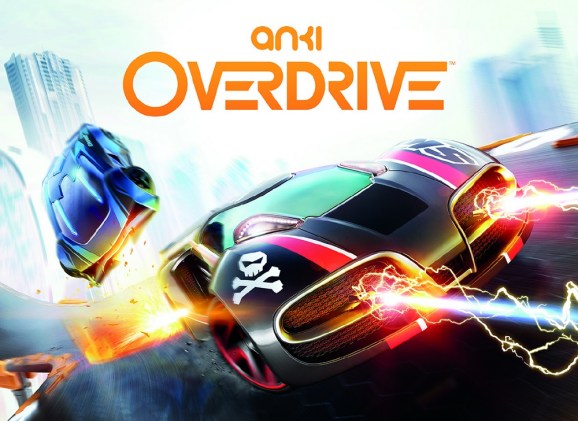 Anki, the maker of the robot battle-car racing game Anki Drive, said it plans to launch its major upgrade, Anki Overdrive, on Sept. 20.

The San Francisco company hopes that Anki Overdrive will further convince consumers that its artificial intelligence system — the product of more than six years of research — will deliver a high-end experience for people who want more than just toy cars. The Anki Overdrive base package will debut for $150, and it will include options for customizable race tracks and up to six new cars.

The A.I. in these cars is very high end, and Anki has made it possible for its racing-car enthusiasts to spend a large amount of money to build their own dream race tracks.

The first product that Anki launched had an oval race track with sensors built into it. Those sensors could detect where the cars were at any given time, and the A.I. in the cars was smart enough to drive better than a human could. You controlled your own car with an iPhone, but rather than fully drive it with the touch screen, you could control the car’s speed and whether to fire its weapons at another car. The cars would all race around the track themselves, turning at the perfect time. You could roll up the track and spread it out on any floor. Anki updated the product last year with more cars, and it was one of the best-selling toys on Amazon.com in 2014. Players have driven more than 800,000 real miles with the 2-inch cars.

On Sept. 20, select retailers will start selling Anki Overdrive in the U.S., U.K., Germany and Canada. 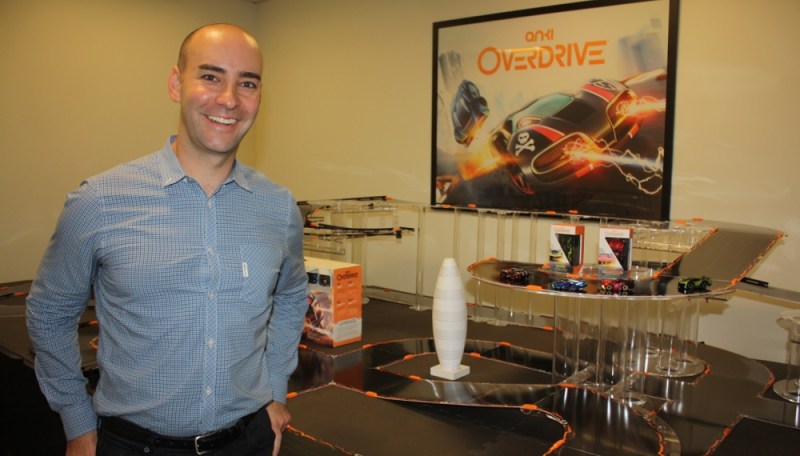 Anki Overdrive’s biggest feature is a modular race track, which you can take apart and reassemble as you wish. You can easily snap the track pieces together via magnetic connectors. So now you can route the cars around the furniture in your living room, rather than finding a big space to lay out the oval track.

Besides launching modular tracks, Anki is also releasing a set of robotic “supercars” that can race around the tracks. Enemy A.I. commanders and their crews can drive those supercars in the game’s campaign mode, and you have to square off with them to advance your own achievements. The upgraded game features a rich, in-depth campaign where players challenge a diverse cast of more than 25 “commanders” to become champion of the Anki Overdrive Tournament.

You can configure the tracks any way you want, and the supercars will be able to drive on them without crashing. The cars will use their A.I. smarts to try to beat other cars and take your car out using weapons and other tricks. 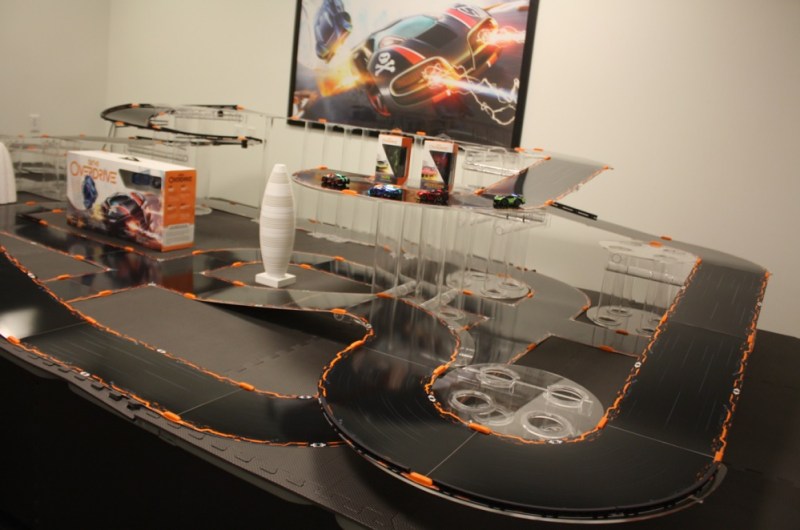 Above: Anki Overdrive lets you custom configure your own tracks.

That takes a lot of A.I. sophistication, but it was made easier by the design of the tracks, which uses a special ink and optics technologies. Each segment of track has markers underneath the faux black pavement, which the cars can see through but the human eye cannot. The markers tell the cars what they should be doing, such as speeding up or getting ready for a sharp right turn or a jump. The cars scan the track 500 times a second for the markers that will tell it to change its racing behavior and enable it to steer precisely on any track configuration. This is one reason why each car has a camera and a 50-megahertz computer in it.

The modular tracks will also work with the older Anki Drive cars once they’ve had a software upgrade. You’ll be able to create eight different tracks with the starter Anki Overdrive kit, and up to 20 if you buy track accessories. The track types include an intersection where the cars may crash into each other and a tile that causes the cars to do a 180-degree turn. There’s also a speed title that gets the cars to speed up and a corner title that enables cars to take turns at top speed. 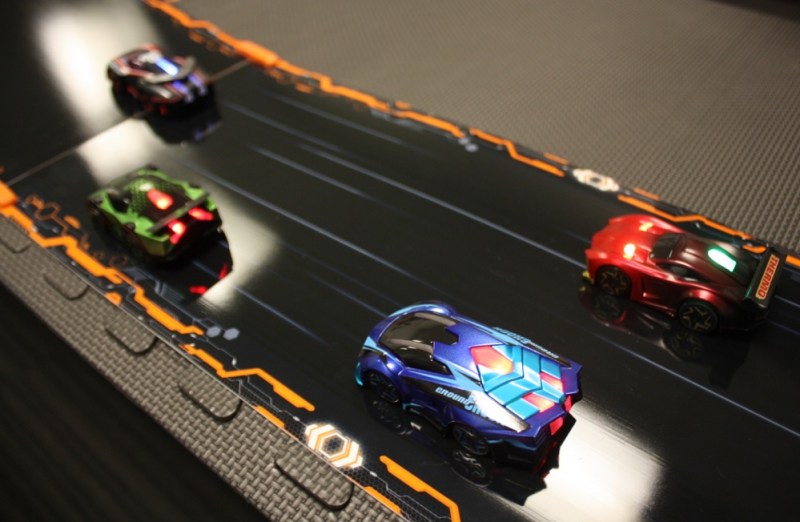 Anki’s Boris Sofman, chief executive, said in a statement that Anki sold out early during the last holiday season because it was an original concept in entertainment. The company is trying to push those boundaries again with Anki Overdrive, he said.

You’ll be able to cross-play with cars controlled by either iOS or Android devices for the first time. The base starter kit will come with two supercars and 10 track parts, and you can buy accessories that will give you the ability to build elevated tracks or add guard rails. The starter kit also has a four-car charger, two risers, and a tire-cleaning kit. Eight expansion track packs and more cars will be available for purchase.

Two cars, dubbed Skull and Ground Shock, will be in the base kit.

Other cars, Nuke, Thermo, Guardian, and BigBang, will be sold separately. And two more cars have yet to be revealed. All of the new cars were designed by Hollywood car designer Harald Belker, whose vehicles have been seen in the films Minority Report (2002), Tron: Legacy (2010), and Total Recall (2012).

Anki was founded in 2010 by Carnegie Mellon Robotics Institute graduates, and it has raised more than $50 million. Anki has more than 80 employees.