Nintendo had a rough time at the Electronic Entertainment Expo trade show last month. Many fans weren’t happy with their lineup, and now the company is explaining itself to investors.

The Japanese gaming publisher held its 75th annual investor meeting on June 26, and the company has published the text from a question-and-answer session it held during the event where it talked about, among other things, how surprised it was about Splatoon’s success. One of the biggest concerns that attendees had concerned Nintendo’s E3 and the perceived lack of big new announcements. In response, Mario creator and Nintendo senior managing director Shigeru Miyamoto explained the strategy for the show, and he even suggested that other companies were making big promises without fully backing them up.

“For this year’s E3 in particular, Nintendo focused on the products that are significant for our doing business in the U.S. this year,” said Miyamoto.

But the Nintendo designer went on to explain that this isn’t a permanent strategy.

“Depending on the year, we focus on not only the software that will be released immediately after E3 or right after the turn of the year but also the products that will be released much later or experimental demos to showcase future possibilities,” said Miyamoto. “For example, during last year’s E3, we highlighted some of our experimental software to demonstrate the unique attractions of the Wii U hardware because its appeal had not yet been sufficiently conveyed.”

Miyamoto said that Nintendo is seeing an uptick in interest in the Wii U in the United States. And that convinced the company that it shouldn’t tease too much about releases that are more than a year off.

“So we decided to showcase a number of products scheduled to be released that will have a direct effect on our business in the near term,” he said. “On the first day of E3, Nintendo aired its online video presentation [known as the] Nintendo Digital Event and introduced to the viewers software that the company would showcase at our E3 booth. Since we mainly included the software that would be released before the end of this year, the entire software lineup appeared to be small. And because we did not include a number of third-party titles, we must’ve ended up giving people the impression that not so many titles will be released on our platforms in future.”

Above: The publisher does have quite a few games coming out by early next year.

Nintendo now realizes that its E3 showcase didn’t fully live up to gamer expectations, but it doesn’t necessarily feel like the event was a failure because E3 is also for retailers like Walmart and Target to make decisions about which games to stock on its shelves.

“Since we only introduced the software to be sold early next year, we acknowledge the criticism from our fans that we failed to excite them with new proposals,” said Miyamoto. “On the other hand, when we looked at our booth at E3 this year, I had a solid feeling that our trade customers appreciated the very fact that they were able to play the software which soon would be released into the market and that many of them were Nintendo-like software titles.”

Miyamoto went on to express a bit of criticism of the competition. He noted that while Nintendo had a booth full of playable demos, companies like Sony and Microsoft made a number of promises about big releases, but no one got the chance to go hands on with them.

“I got the general impression that [Sony and Microsoft] were showcasing not only the products for this year but also many products for next year or the year after and, because of that, introductions for many of their software titles were done visually, not with playable demos,” said Miyamoto.

That was the definitely the case for Sony’s “big three” of The Last Guardian, Shenmue III, and Final Fantasy VII Remake. It was also true for that company’s new Horizon: Zero Dawn and Uncharted 4: A Thief’s End.

“Amid this atmosphere, because the visitors to our booth were able to pick up the controllers and try out the playable software, I believe they were able to appreciate, among other things, our focus that Wii U is a home video game system that we would like people to enjoy in their living rooms,” said Miyamoto. “I have participated in a number of media interviews, and the comments from reporters also attest this impression.”

But despite these alleged impressions, Nintendo definitely had a vocal fan base that wanted more. But the company says it is aware of that.

“We recognize that we have let down a number of the online viewers of this year’s E3,” said Nintendo president and chief executive officer Satoru Iwata. “Especially the avid Nintendo fans, because we did not show what they had expected.” 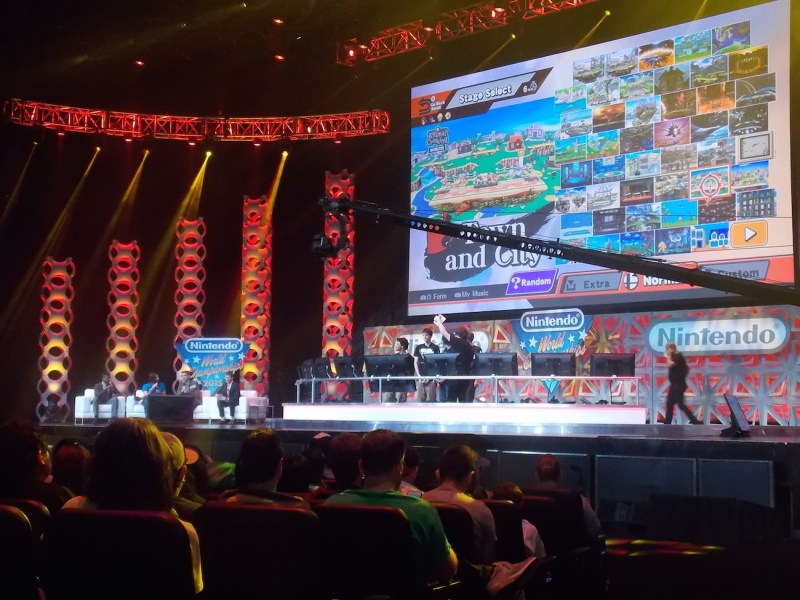 Above: Nintendo did hold its Nintendo World Championships, and it announced a few games during that.

But Iwata stopped short of apologizing or even suggesting that the company should have done anything different at this E3.

“Since E3 was originally a U.S. trade show, when we consider what kind of messages we should dispatch and in what fashion, while we have to take into consideration the impression that we may give to people outside the U.S., we have been very mindful about how we can maximize our immediate business in the U.S. this year,” he said.

Iwata then went on to throw some shade at Sony and Microsoft.

“One thing I should say about Nintendo’s E3 booth is that, unlike the other booths in general, most of the visitors to our booth were smiling and actually picking up the controllers and playing with our games,” he told investors. “So, this was one big difference because a number of the visitors to other booths appeared to have spent a lot of time just watching game videos.”

Finally, Nintendo talked about how the company also used the Nintendo World Championships to make a handful of announcements for games like Earthbound Beginnings. But it once again noted that it wasn’t enough for some fans.

“There was a lot of excitement from the visitors and the contenders [for this event],” said Iwata. “So, we listen sincerely to the voices of fans who were not happy about the announcements we made in the online Digital Event, and we will have to make further efforts to improve. But when it comes to the reactions to our E3 activities overall, the reactions from trade customers and the media were not that unfavorable. I hope you will understand it.

“When we think it necessary to discuss future products even if the release timing is yet to be determined, we may do so without being able to discuss the details,” continued Iwata. “And when we have more concrete proposals on the products to be released in the near future, we will try to explain the appeal of that product as best as we can. Since we determine our E3 theme each year, you might have had quite a different impression this year in comparison to last year. We are listening to people’s opinions and we will try to improve next year and beyond.”