Game companies used to invite powerful game journalists for a big game launch. But on Wednesday, Super Evil Megacorp rounded up many of its favorite Twitch broadcasters for the formal launch of its mobile multiplayer online battle arena (MOBA) game Vainglory.

The event took place at the headquarters of gameplay livestreaming firm Twitch, and it was the beginning of a 24-hour livestream celebrating the game, which built an audience of 1.5 million monthly active users during its eight-month beta period. The event says a lot about the new world of game marketing, where reaching the right influencers on video platforms is the way to make a game more popular. And today’s influencers are on Twitch, which is why Amazon paid $970 million for it last year.

Those influencers go by names like Ezekiel_III, Ms Vixen, DonJon, StanSmith, and dozens of others. Super Evil Megacorp brought players from all over to San Francisco for the Vainglory marathon livestreaming session on Twitch. They gathered at Twitch and uttered a lot of profanities while talking trash at each other on camera. 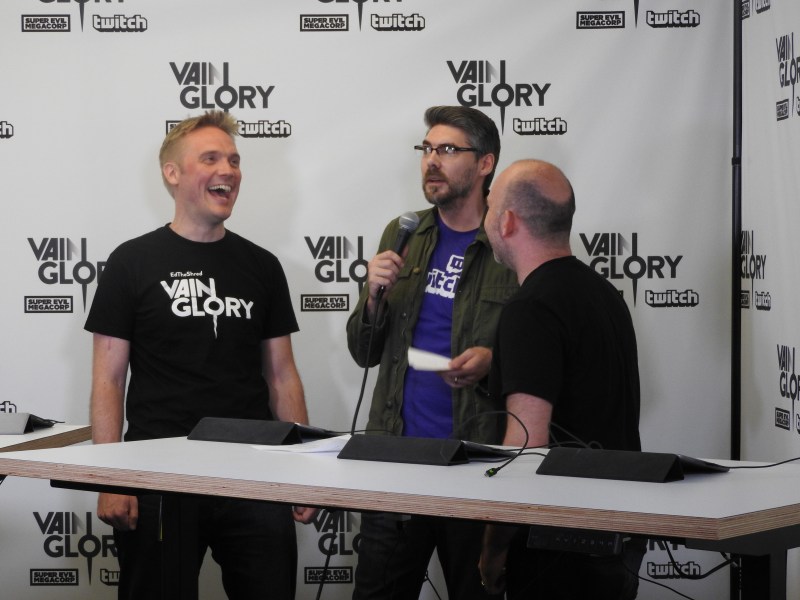 Kristian Segerstrale, chief operating officer of San Mateo, Calif.-based Super Evil Megacorp, said in an interview with GamesBeat, “We really wanted to gather all of the people who have shown us love and show them some love back.”

Many of those players are quite good at the game, and they have earned worldwide reputations as a result. Bo Daly, chief executive of Super Evil Megacorp, said his development team toured Europe and met with the top players — who proceeded to slaughter the developers in matches. A lot of those Europeans are heading over to South Korea to compete in a Vainglory esports tournament.

Vainglory isn’t the biggest game yet, and the broadcasters who showed up said they can’t make a living yet just streaming their experiences with Vainglory. But they all said the game shows promise and it has increasing momentum, and that is encouraging to Super Evil Megacorp. In fact, the esports momentum grew so fast that the company decided to add a spectator mode more quickly than it expected, mainly due to urging from the community. 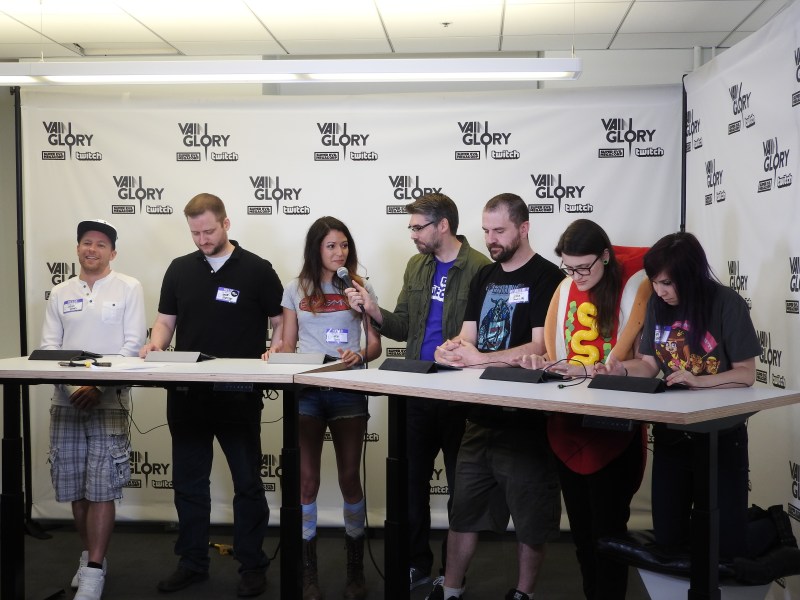 Company watchers have pointed out that Vainglory hasn’t climbed the top-grossing charts on the app stores. But Segerstrale said he is most impressed by other metrics.

“We don’t pay attention to the company watchers,” Segerstrale said. “The number we think is much more meaningful is the 270,000 people who watch it on Twitch. Nearly 20 percent of the audience is engaged enough to not only play it, but to watch other people play the game.”

He added, “People look at you with the eyes of how the previous generation evolved. This is the journey we are on. Our view of the future is clear. We are absolutely convinced that portable touchscreens will be the primary gaming devices of the future. Software that creates great core gaming experience for these players is going to take off. It’s not going to happen overnight. We are certainly excited by the start we have made.”

Segerstrale pointed out that the first real monetization system in the game kicked off just a few days ago. Players will be able to layer three “skin themes” on their heroes. They have to pay for the first layer, but they can only get the second and third layers by reaping rewards at the end of matches. Segerstrale said Twitch viewership tripled from February to May, but he acknowledged you can’t build a giant community overnight.

I thought it would be fun to interview some of the streamers, as we don’t always hear about games from players. Here are some of the characters who participated in the Vainglory event. 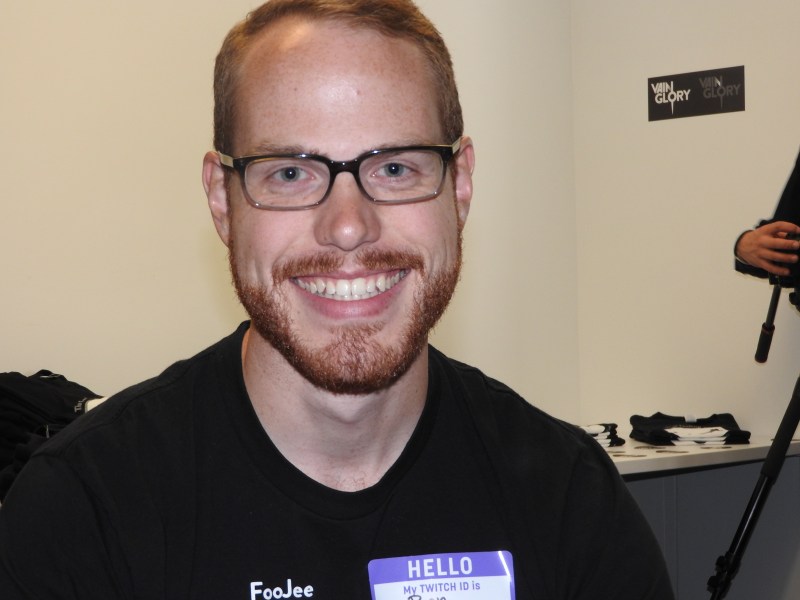 Above: Ben Watley, Twitch broadcaster, now plays Vainglory instead of League of Legends.

Ben Watley of San Francisco has been streaming Vainglory on Twitch since February.

“People navigated to my channel because I was in a higher-skilled tier and was in a guild called Nemesis that was popular on the forums,” Watley said. “I stuck to public queue matches where people competed for rankings.”

It’s not yet generating a lot of money from ads on the Twitch livestream yet. But it’s not paying for rent in San Francisco. Watley’s day job is running the startup RevUp.

“I played a lot of MOBAs before, and I played League of Legends for a while,” he said. “I saw a commercial for Vainglory and I downloaded it. I liked the way it looked. I was sitting on a couch, feet up. I thought I would have a MOBA moment. I could play it for a few minutes and then put it down. League of Legends requires you to be all there, all invested, at a computer. I stopped playing League altogether and have been playing this game ever since.”

He said that some League of Legends players look down on Vainglory. “Super Evil Megacorp is trying to show the world that Vainglory requires an incredible amount of skill. League of Legends is the behemoth. But if you really like MOBAs, and you want a different experience, Vainglory is the next best thing.”

He stuck with it so far because there’s always a new twist for the gameplay when Super Evil does an update or introduces a new hero. 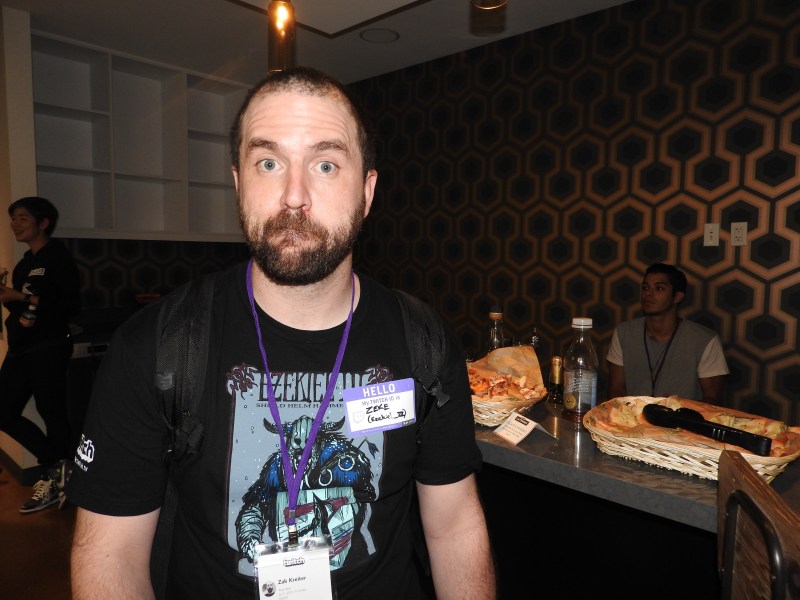 Above: Zak “Zeke” Kreiter is also know as Ezekiel_III on Twitch.

Zak “Zeke” Kreiter, also known as Ezekiel_III, came from Billings, Montana, to play at the Vainglory event. He started streaming a couple of years ago, but he picked up Vainglory a few weeks back.

He hasn’t played that much yet, and he’s fresh to MOBAs. He met the Vainglory team at PAX East, and they sent him an Nvidia Shield tablet so he could play the game. They trained him how to play and stream from the tablet. If you’ve played a MOBA before, you can play Vainglory, he said. He played at Twitch’s HQ, and his team got crushed.

“It took some doing to get an iPad to do the capture, but I think this new spectator mode they’re showing today is pretty cool,” Kreiter said. 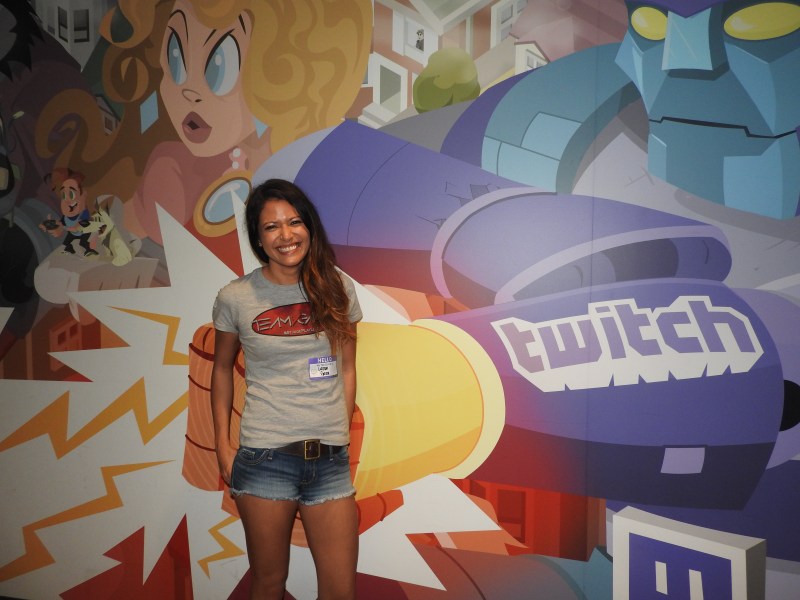 Above: Lanai Gara, Ms Vixen, at the Vainglory launch event at Twitch HQ.

Kreiter’s team got crushed by one headed by Lanai Gara, also known as Ms Vixen. She has around 180,000 followers and 10 million views on Twitch, and she’s been broadcasting Vainglory matches for almost six months. She has played a lot of Call of Duty and Destiny, but she’s been streaming a wider variety of games lately.

From Battleground, Wash., she flew down to the San Francisco headquarters of Twitch to play live matches in-person. Her team was victorious. And she’s had a lot of practice. She figures it takes about a week for someone to grasp all of the competitive aspects of the game and its heroes.

“We’re very competitive,” she said. “We have a rivalry. I rage and he rages.”

As for the game, she said, “I like it because it is casual. You can play it in bed. I play a little League of Legends. But I don’t have to get out of bed and go to my PC to play it.”

She thinks the game will get more popular. “This is just the beginning. I think it will blow up bigger than League of Legends. Everybody has a tablet or a phone.” 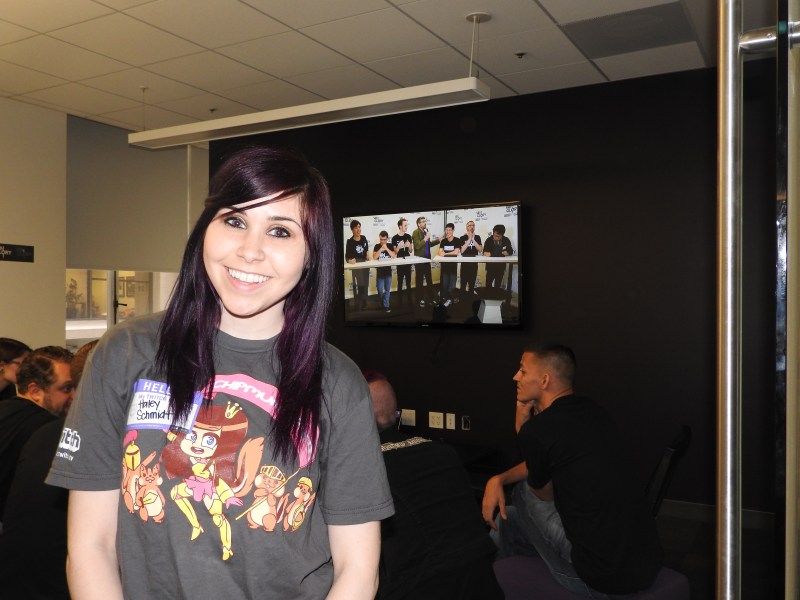 Haley “TheHaleyBaby” Schmidt came out from near Houston, Texas, to attend the event. She said she prefers Vainglory over other MOBAs. She’s a first-person shooter fan, and she prefers a faster-paced game. Vainglory fits with that, as you have to tap on the touchscreen furiously to win.

She thinks the game is more entertaining than League of Legends because the map is smaller and the action is more complex. While League of Legends has five players against five, Schmidt said it’s easier to field a team with Vainglory and three-on-three matches. Schmidt has been streaming for her job for a full year now, and she has 63,000 followers. So it has become her full-time job.

“One of the taxi drivers said he loved Vainglory as we were coming in,” she said. “It’s neat to see it blossom.”