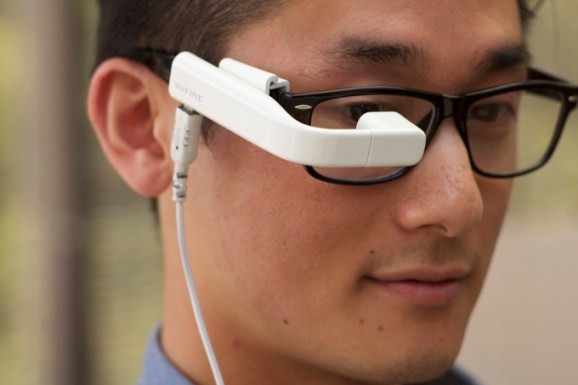 Each week our friends at Backerjack provide an update on a hot crowdfunded tech gadget. This week we profile the Vufine, which has exceeded its funding goal by more than 50 percent.

Although Google Glass (and its successor) have attracted the most attention in the growing wearable display market, it’s clearly not a product for every consumer due to factors including its high price.

Vufine is a much cheaper alternative to Google Glass that works in conjunction with any device capable of outputting a 720p HDMI signal. It presents not augmented reality but rather any digital video output. The clip-on microdisplay attaches to one side of a standard pair of eyeglasses via a magnetic docking station that allows it to be adjusted for the user’s comfort. Vufine can be plugged into mobile devices to act as either a second monitor to view movies and other video content or to display information including GPS directions, emails and text messages. Wearers can also use it as a viewfinder for cameras, or to see everything that their drones are seeing in flight. Vufine costs $149 and ships in November. Its maker has set a Kickstarter goal of raising $50,000 by July 22.

In addition to its affordable pricing, other features that should make it attractive to consumers looking for a wearable display device include the fact that it is not reliant on any one operating system. It also shouldn’t raise the same sort of privacy concerns as Google Glass because Vufine doesn’t have a built-in camera. Drawbacks, for now anyway, include the fact that Vufine is only attachable to the right side of a user’s glasses, making it more comfortable for right eye-dominant individuals to use.

The device also can only run for 90 minutes of continuous use at this time without attaching it to an external battery. Also, although Vufine can be attached to most glasses, it may not attach to irregularly shaped frames. Of course, products such as those from Vusix and Sony have provided personal viewing experiences for some time, but Vufine may allow one to balance what they’re watching with what’s happening in the real world.

Also check out this wireless smart microphone, this smart floating pool monitor, and this fingerprint-activated doorlock.